One the face of it, Nokia’s prediction that 5G in combination with associated developments in edge computing, data analytics and private networking will propel the global economy forward $8 trillion by 2030 can be dismissed as just another bullish and over-optimistic forecast by a vendor of cellular infrastructure with a vested interest in stoking the market.

But beneath the headline figures are some more nuanced predictions that are at least worthy of analysis, the sense being that 5G will elicit a rebalancing of the global economy away from digital services to the ‘physical industries’. There is a paradox underlying this assertion in that this shift towards physical industries accounting for 65% of all ICT investment by 2030 will occur precisely because of an accelerating digital

transformation of these sectors such as industrial and automotive, as well as healthcare.

The report from Nokia’s research unit Bells Labs Consulting refers to ‘5G+’ to describe the larger constellation of associated technologies – a larger ecosystem beyond the immediate cellular infrastructure that characterized earlier generations, including edge compute for example.

Nokia’s key statement is that over the next decade, a “$4.5 trillion investment in 5G+ technologies will trigger a concomitant $8 trillion growth in global GDP in 2030, or a 7% increase in overall GDP, measured in terms of workers’ wage growth, enterprise profitability growth, and government revenue growth.” That would value the world economy at about $114 trillion in 2030, compared to $87 trillion in 2019.

The world would surely take that given the current depressing effect of the Covid -19 pandemic, which by coincidence has brought global GDP down by almost the same amount Nokia predicts 5G will generate, at $8.8 trillion according to Asian Development Bank (ADB). That was a forecast made in June and with the pandemic still ongoing and lockdowns intensifying in some countries, the final reckoning may be worse than that. 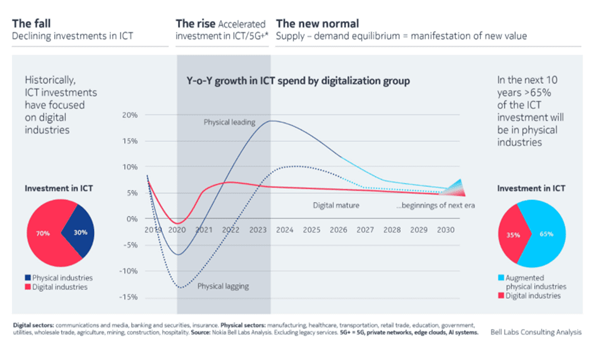 Over the next decade as a whole though, Nokia predicts that spending by physical industries will account for two -hirds of all ICT outlay because of that digital transformation spurt over the next three or four years, and digital industries one-third.

Annual global ICT consumption is forecast to more than double from $2.8 trillion in 2020 to $6 trillion by 2030, with 5G+ technologies, applications, and services contributing 75% percent of that, or $4.5 trillion. “Of this, edge and cloud hardware and platforms will have the largest share, at 49% ($2.2 trillion), and private networks and AI (and machine learning) services will run practically neck-and-neck, contributing 18% and 20% ($800 billion and $900 billion) of investment, respectively,” says the report.

It is easy to detect the hope that 5G will deliver on its promised use cases quite quickly in that forecast of rapid ICT investment among the physical industries. If that promise is not fulfilled, that boom in ICT spending cannot take place. But there is another way to gauge the forecast, which is to examine the corresponding link between 4G and global growth over the last decade.

What is beyond doubt is that 4G has generated a much greater boost to global GDP than its predecessors, as can be seen just by considering the litany of web businesses that have grown up as a result and would not exist without it, such as Uber and Deliveroo, as well as a multitude or smaller and local enterprises.

It is very difficult to assess the impact of 4G even in retrospect given that its impact has been disruptive for some traditional businesses and led to retail losses on the high street for example. But various efforts have been made, with a joint report from Recon Analytics and CTIA, the US wireless industry association, estimating that the mobile industry resulted in 10% of US GDP growth between 2011 and 2019. That would be $600bn out of the $6 trillion rise in US GDP over that decade.

Meanwhile, the GSMA estimated that by 2017 4G had already added $3.6 trillion to economic value. That forecast is more on the same page as Nokia’s for 5G, while the US one would equate to considerably less. In fact, having earlier been a laggard in cellular investment and deployment, the US had advanced to the vanguard in the case of 4G and so would have accounted for a substantial proportion of the global dividend from the resulting boom in online activities.

Only time can really tell whether 5G’s impact will come close to matching the more bullish forecasts. Nokia has also though issued some analysis of sentiment among both consumers and enterprises that are more grounded in the here and now, so indicate where proven opportunities lie.

On the consumer front, Nokia surveyed 3,000 people in the UK, USA and South Korea and in June 2020 reported FWA (fixed wireless access) as the most desirable 5G use case amongst consumers there. Just over three-quarters of all respondents regarded FWA as the most appealing use case overall, with 66% indicating they would subscribe to 5G FWA if it cost the same as their current broadband service and delivered the same or better performance. Indeed, more would subscribe if it cost less. Notably, 41% of respondents only had the option of a single fixed broadband provider and often resented this lack of choice.

This is mixed news for operators, suggesting that there are opportunities to offer FWA on the back of 5G as an alternative to traditional fixed broadband offerings, but on the other hand that consumers are less captivated by some of the more exotic use cases like ER (extended reality).

The research did confirm though that video quality and reliability has risen sharply up the agenda, even though the research was conducted prior to the current pandemic. That conforms with findings from Nokia’s corresponding survey of enterprises published around the same time, identifying video as the ‘killer app’ for 5G across verticals and different business sizes, with 83% finding it compelling.

Almost half of respondents cited 5G-enhanced video monitoring as a near term opportunity within the next four years. Respondents suggested that 5G will enhance the video experience, with 83% finding video alerts such as detecting and recognizing who is on premise as valuable capabilities.

Again this is mixed news for operators, highlighting opportunities in video but perhaps reflecting lower awareness than they had hoped for of emerging use cases upon which those longer term forecasts of growth are predicated.