A flurry of announcements in the hydrogen sector has once again caused a surge in investor interest. With new plays from infrastructure giants Siemens, as well as energy giants Total and Engie, Rethink Energy’s new Hydrogen Index has now risen by 38.1% in the first two weeks of 2020 alone.

Rethink launched its Hydrogen Index last week, with significant weightings in ten companies that are active in the nascent hydrogen sector, while tracking the performance of a further sixteen. The past week’s activity has seen the index’s value grow by 19.4%, adding to last week’s performance and resulting in a year to date increase of 38.1%. 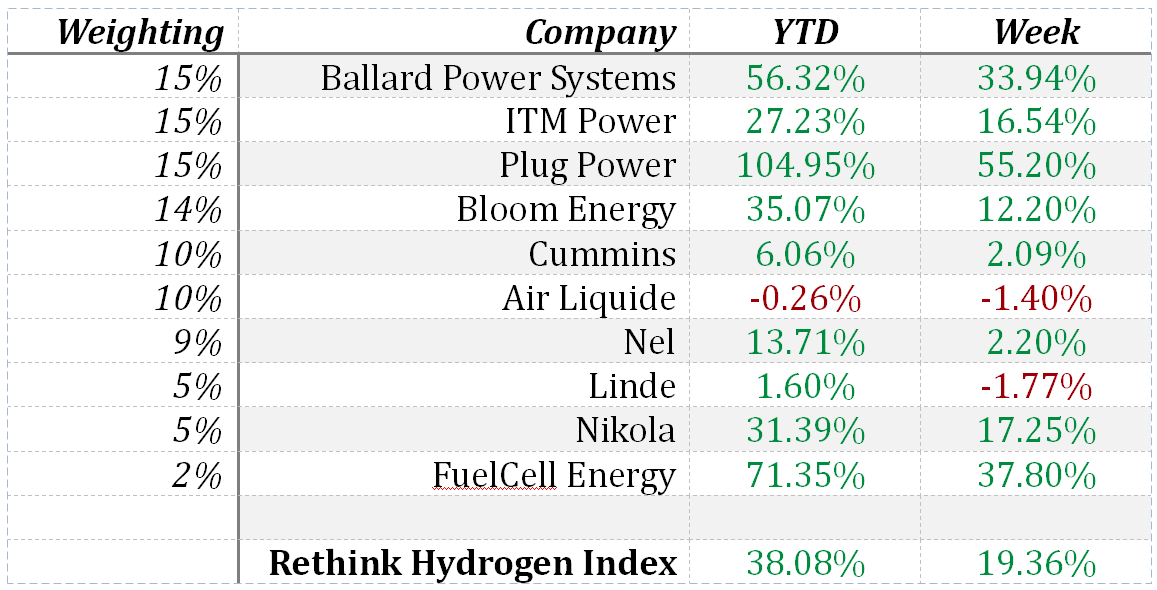 For the second consecutive week, this growth has been led by Plug Power (+55.2% this week), which announced plans to form a 50/50 joint venture with French automaker Renault to build fuel cell vans in Europe, targeting a 30% market share in the sector. This has prompted several Wall Street analyst firms to raise their target price for the stock as high as $85 per share – up from its current value of $70. The company also benefitted last week from a $1.5 billion investment from SK Group, which took a 9.9% stake in the company with the intention of forming a further joint venture company in South Korea to support the rapidly growing hydrogen market in Asia.

This, along with the other activity, has caused a surge in prices for all major fuel cell providers. Bloom has risen 12.2% this week, while Ballard Power Systems and FuelCell Energy saw 34.0% and 37.8% growth respectively. Ballard this week also announced that it will provide the fuel cells for Arcola Energy’s project to supply Scotland’s first ever hydrogen-powered train, which will be demonstrated at Glasgow’s COP26 conference in November this year.

PowerCell Sweden, which is up 18.1% for the year, also received a similar order this week, with an order for one of its MS-100 fuel cell systems from a ‘leading European construction equipment manufacturer,’ which will be delivered in the coming months.

Prices have also risen significantly for struggling vehicle start-up Nikola, as well as electrolyzer manufacturers Nel and ITM Power. The latter of these has seen 27.2% growth through the year so far, having pulled in orders for the EU’s FCH2-JU Oyster project – a feasibility study and pilot project being run by ITM, Orsted, Siemens Gamesa and Element Energy. The company also received a 24 MW PEM electrolyzer order from Linde, to be installed at the Leuna Chemical Complex in Germany and enter operation in the second half of 2022.

Arguably the biggest moves in the sector this week have come from age-old companies that are looking to transform through the energy transition. Siemens Energy, along with Siemens Gamesa, announced plans to develop a specialized offshore wind turbine to produce hydrogen, with a planned investment of $146 million. The aim here will be to satisfy the power and hydrogen needs of large industrial firms, including steelmakers, refineries and chemical companies. Early statements suggest that the endeavor will see one of Siemens Gamesa’s 14 MW turbines integrated with built-in electrolyzers. A project using the technology, with a capacity of up to 200 MW in size could be in operation in Germany as early as 2025, especially if the pair can grab hold of any of the €9 billion that the country’s government has pledged to kickstart its national hydrogen industry.

Oil major Total also upped its ante this week, following an announcement that it would continue to up its renewable energy investments through 2021. The company has signed a cooperation agreement with utility Engie to develop the Masshylia project in France, which will be the country’s largest renewable hydrogen production site when it enters operation in 2024. Powered by 100 MW of solar capacity, the 40 MW electrolyzer at the site will produce 5 tons of green hydrogen per day to power biofuel production at Total’s la Mede biorefinery.

The project also aims to test five innovations which could boost the development of the broader hydrogen sector. These include: A digital piloting system for the continuous supply of hydrogen with real-time management of solar electricity production; Optimizing the integration of several photovoltaic farms to minimize energy losses; Large-scale hydrogen storage to balance supply and demand; A direct current connection between a photovoltaic farm and the electrolyzer; and using 3D digital models to improve industrial safety.