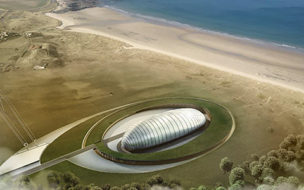 It’s been 6-months since Rethink Energy first discussed small modular nuclear reactors (SMRs), and while we were initially skeptical over when we could start to see them come online, the lack of speed-bumps in UK regulations and supply chain has led manufacturers to expect operational power stations to be built by 2029.

On behalf of the UK SMR Consortium, Rolls-Royce announced last Thursday that its small modular reactors could be generating power in the UK by the end of the decade – ahead of the timeframe it suggested just a few months ago. With limited government funding, this suggests a frantic race for SMRs to become cost competitive with renewables plus storage, and a ticking clock if the technology is to be proven to be anything other than a vanity project for a dying nuclear industry.

The emergence of SMR’s comes at a time when the future for nuclear power is somewhat unclear. With fears around how to handle nuclear waste as well as the risk of future disasters akin to Fukushima or Chernobyl, over 14 countries without nuclear power remain opposed to it as a source of electricity, while Germany, Italy and South Korea are among an increasing number of countries phasing out their existing nuclear facilities.

Nuclear is also facing pressure due to the lack of success seen at large-scale projects in supposedly ‘nuclear-friendly’ countries. If you look at projects being developed by EDF, concerns around safety are leading to massive delays and huge additional costs. The Flamanville project for example has been delayed by 10 years, running at €1.5 billion over budget. Austria is even in the process of suing the European Commission as a result of the Hinkley project, UK, calling it a “technology of the past” which “should not be kept artificially kept alive with government subsidies.”

SMRs use fairly conventional nuclear techniques on a reduced scale. The technology being developed by Rolls-Royce for instance, uses a triple-loop pressurized water reactor (PWR) to produce between 400 MW and 600 MW of electricity, enough to power a city roughly the size of Leeds in the UK. With zero-carbon emissions, advocates behind the technology claim SMR’s not only to be the future of nuclear, but a key complementary partner to renewables, without issues around intermittency.

The project that the British consortium is working on is slightly different to other SMR’s in the global market. Rather than focusing on new nuclear technology, Rolls-Royce has been adamant that it is “productizing” a nuclear power station – with emphasis on the “station.” However, the consortium has so far only received a paltry £18 million for R&D from the British Government.

This entails producing a single design which can be produced repeatedly with only minor modification. This would effectively design out costs and risks associated with traditional project-based approaches. With each component small-enough to be standardized, modules can be mass produced at a factory before being transported to site.

The only project-specific elements of each SMR are related to its geological and geographical factors, which are largely accounted for using a foundation slab with a seismic bearing pad to prevent damage from seismic or thermal loading. Rolls-Royce is currently targeting between 10 and 15 sites within the UK (1.5 acres for the reactor, within 10 acres of land space), for its first-generation of 440 MW reactors. These sites are also expected to be on the ground of retired nuclear sites, where security infrastructure and planning permissions are already in place – which may also tackle issues around near-term stranded nuclear assets in the UK.

Through this process Rolls-Royce aspires to achieve a 500-day construction phase, which implicitly reduces Capex costs while simultaneously alleviating uncertainties around safety. Members of the consortium have claimed that man hour requirements are reduced by over 40% due to dedicated offsite module manufacture. Through this, Rolls-Royce believes its 440 MW design can be built on a first of a kind basis of £70 per MWh and fall to around £60 per MWh from the fifth unit onwards.

SMR’s however do not alleviate anxiety around nuclear waste and have yet to really prove themselves. Some experts have warned that SMR manufacturers will need between 40 and 70 orders to make building a factory viable. To achieve this, as well as the low £60 per MWh LCOE required to be competitive with renewables, the British Consortium will need exports. While it expects a global market of around £250 billion, capturing this market will require beating competition from other SMR developers like America’s NuScale and Russia’s Rosatom, which anticipate that commercial SMRs could come online from 2025.

It’s more likely that in a best-case scenario Rolls Royce will only be able to achieve the economies of scale by the mid-2030s, by which time renewables-plus-storage are likely to have fallen to similarly low cost.

If SMRs fall behind in this race, then groups like the UK SMR consortium face the risk of becoming redundant in the electricity mix. However, the UK’s established nuclear industry, with a developed supply chain and national professionals, means that there is arguably more certainty within SMRs than in energy storage, and investors are likely to latch on to this alternative future for the nuclear sector rather than jump ship completely.

Rystad nods along with developers in ambitious offshore forecast
GE Jekyll and Hyde quarter; revenues fall in power, renewables up 2%