SunOyster for both power and heat

Our Talking with Start-Ups this week is a chat with a long standing start-up, which although it has been around since 2011, has only really just completed its set up technology design – SunOyster, a German duel solar company – pushing both PV and thermal together.

We spoke this week to founder and CEO Carsten Corino, who immediately claimed that what was unique about his system is that it converts about 20% of the energy hitting the system’s surface into power, and another 55% into heat, with his SO16 system (called so because it covers 16 square meters) outputting 5KW of power and 7.5 Kw of heat – enough to heat water and provide home heat for a large house.

“You can get more out of renewable energy this way, and heat is the big sleeping giant of renewables, with 50% of primary energy used to provide heat,” said Corino.

What is key to the system is that it tracks the sun in two dimensions, and uses a partial parabolic mirror to focus the heat onto a bar containing water with anti-freeze in it as a heat transfer fluid (See pic below), rather like many CSP systems. 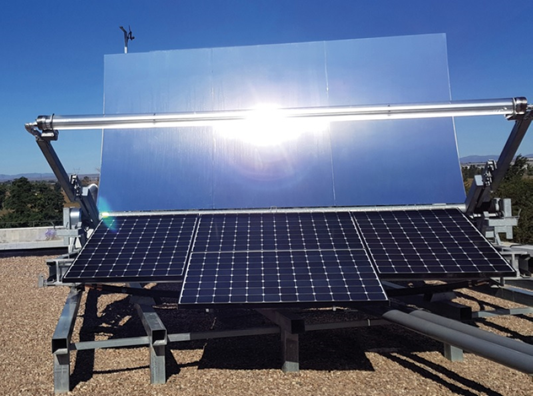 At present the solar panels are provided from Chinese giant Trina, but Corino is hoping to shift to German supplier Solar Fabrik.

“We are just about to launch our new design, the SO8, with one mirror, which offers half the generation of the SO16. It is smaller and lighter and which can commission itself,” said Corino. He sees it as the perfect compliment to an EV owner, sat on a carport roof, to recharge the car. He says the average site location in Germany will offer 3,500 KWh of heat and 3,500 KWh of electricity for this design.

Corino spent a while in the wind industry with Senvion and while there built up contacts around the world including China and has one of his systems installed there, and has even managed to file 3 patents for his system in China. The first relates to tracking algorithms, the second to hybrid co-generation and the third to the structure of the semi-parabolic mirror. He has filed these elsewhere, but added, “China seems to be the only place that is efficient enough to have processed the patent so far, we also filed in India but have not heard from them yet.”

The tracking system, like most trackers, relies on a database of where the sun will be minute to minute, which goes out 30 years into the future, tracking the sun East to West and high to low simultaneously.

The big issue Rethink Energy has with this system is the way the buyer cannot aim at just one form of energy, you are stuck with getting both heat and power. Many of the SunOyster customers so far have been hotels, and Corino gives the example of one hotel that has cut both its electricity and heating bills by 40%. We cannot see it being used at Utility scale, although we can see it adapted to provide industrial uses with both electricity and industrial heat, although at present the heat cannot be higher than 200°C, because of the choice of water for a heat transfer medium.  But the main target seems to be the average home, which needs both heat and power.

The heating side has to work in a closed loop, with a central pump controlling the water temperature by the speed at which it pumps, working with a large buffer tank of water, anything from 500 liters to many cubic meters of water,  keeping it at 60°C to 70°C, although it can be adapted to higher temperatures if needed. The only mistakes that Corino will admit to in the past was one installation where a prototype was set up without SunOyster completing the closed loop and the buffer tank was allowed to go dry, with relatively disastrous consequences – a lesson that now requires all components of the system to be tested and installed by SunOyster.

The company only ever sold 20 SO16s, and will officially have the SO8 available from this autumn, which it expects to ship in far higher volumes.

This is because it expects to undergo a round of Crowd funding this May, raising €1 million and part of this is to get the new system’s first test certification, and to add more staff and to pay for components in volumes. Rethink Energy made the comment that SunOyster really needs to take on board a lot more money if it wants to get the system working at scale.

Corino kept avoiding the question when we talked prices, but insisted that this is well within the price range for individual homes, even in Germany and said that such a system would pay back full costs of installation in 5 years. This is primarily because of the high cost of electricity in Germany, despite the relatively low irradiation. “It’s about the same payback in Spain or Portugal, because although the electricity there is much cheaper, the sun is also much stronger.”

The company is called SunOyster because of the way the system closes up to the sun into a flat safely position, in the way an Oyster closes up when threatened.

The full video interview can be found here.