Under an announcement which suggests that this is an “acceleration” of a move to clean energy Vistra has promised to close 6.8 GW of coal plants as soon as possible, and certainly before 2027.

Vistra is one of the largest utilities in the US, but its motives are clearly complex. It has already closed some 16 GW of coal since 2016, after its bankruptcy, re-organization and the arrival of Curt Morgan as CEO. However these earlier closures were spread all around its markets in Texas, Ohio, PennSylvania, Illinois and Massachusetts, while many of the new closures are purely in the MISO markets in Illinois and Ohio only.

This is because many of these closures are the Vistra board making a point – it feels that the Midcontinent Independent System Operator (MISO) has been too keen to support renewables at the expense of coal, and a few executives are being quoted in the US energy press saying that state subsidies and declining gas prices are responsible and saying that MISO should have done something about it. Effectively it is a series of protest closures, triggered by pollution inspections, suggesting that coal should have been protected against subsidized renewables the way it has been in the PJM market, using minimum price rules.

As a result all of the spend on renewables that will replace the lost coal plants are in its home market of Texas, not in Illinois and Ohio. The truth is that coal plants owned by utilities that are regulated can charge customers for the shortfall, and merchant coal players have to take it on the chin.

By ironically some of the closures are actually traded on PJM. 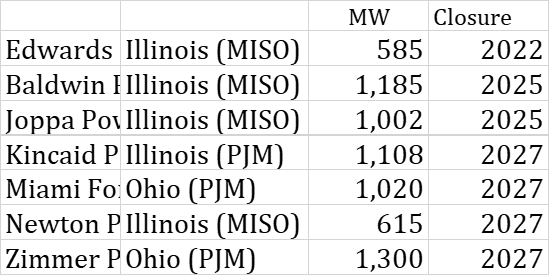 Vistra will add 928 MW of solar over the next two years across 7 sites, costing it $850 million, which are all located in what it describes as the “attractive” Electric Reliability Council of Texas market (ERCOT).

Vistra is the largest competitive power generator in the US with around 39 GW of capacity, strong on natural gas, nuclear, solar, and early battery energy storage projects. It has bought significant wind power and is in the process of building the 400 MW/1,600 MWh battery energy storage (BES) system in Moss Landing, California.

Vistra has used the announcement to says that it will be raising its 2020-2021 financial guidance as a result. As with all US utilities, it dressed up all the moves with claims that it is embracing a low carbon future.

Curt Morgan, CEO said, “Vistra is paving its way for a sustainable future – economically and environmentally – and we’ve been focused on transitioning our generation portfolio for the benefit of the environment, our customers, our communities, our people, and our shareholders.”

Vistra is languishing with a market cap of just $9.2 billion and has actually included a new 2.3 GW nuclear facility in its list of carbon free projects, which is a pair of upgrades to an existing nuclear plant, which has been there since 1974. 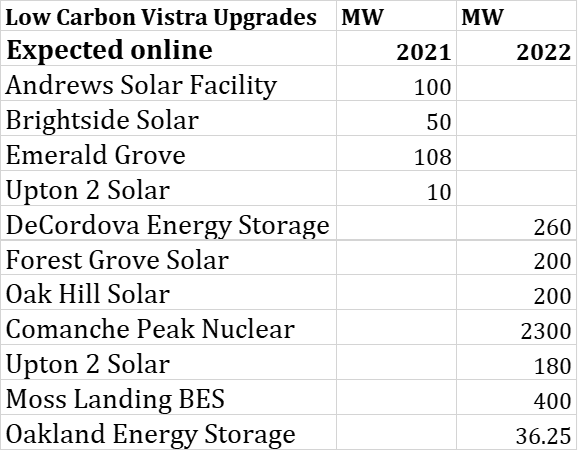 Vistra says it is aiming to reach a 60% reduction in CO2 emissions by 2030 and has a long-term objective to achieve net-zero emissions by 2050, up from its previous 80% target.

The accompanying company statement said, “These plants, especially those operating in the irreparably dysfunctional MISO market, remain economically challenged. Today’s retirement announcements are also prompted by upcoming Environmental Protection Agency filing deadlines, which require either significant capital expenditures for compliance or retirement declarations.” Hardly a statement made in the interests of climate change. It did go on to say that Vistra believes climate change mitigation will create significant opportunities for the company. Not if it accepts them so begrudgingly.

We can expect a similar reluctance when solar and wind create losses in its existing gas resources, which are plentiful. It has 7 CCGT gas turbines in the ERCOT market totaling 7,838 MW in capacity, along with peaking facilities of 3,538 MW. Its PJM fleet has 8 CCGT natural gas turbines making up 5,902 MW and six gas or oil-fueled turbines totaling 1,439 MW. In New York it has a further 8 CCGT generation systems with capacity of 4,730 MW, for a total of 21.3 GW of its total capacity and this shows that gas is by far its most favored technology.

It may have 8 or 9 years before these become financial embarrassments, but it is already inevitable, and no-doubt it will once again blame the ISO markets, not itself for not changing them.