The unprecedented acceleration of carmakers towards electric vehicles is by no means over, but one-upmanship in the industry is already starting to make many targets appear insufficient. Through subsidiary Polestar, Volvo last week unveiled a new benchmark target of an off the shelf ‘carbon neutral’ vehicle by 2030. This week it went one step further and started setting out early steps to eliminate emissions from its supply chain, starting with fossil-free steel.

The announcement comes just a week after Polestar – an electric-only brand owned by Volvo – set an ambition to create the world’s first carbon neutral car by 2030, a target it is striving to achieve without the use of carbon offsets.

Starting with the Polestar 2, which was released last year, the company will now disclose the carbon footprint and the traced risk of materials behind its vehicles. If all goes to plan, the Polestar 0 will find carbon neutral sources for materials including aluminum, lithium, cobalt, and steel, and will be carbon neutral off the shelf in 2030.

When it comes to climate ambition, largely off the back of investor pressure and explosive growth from the likes of Tesla, we’ve seen huge progress across the automotive sector over the recent months. General Motors, Mercedes, Ford, Jaguar Land Rover and Suzuki have all been among those upping the rate of their shift to electric vehicles – with many promising to phase out ICE vehicles altogether over the coming decade. Many have also pledged themselves to become carbon neutral companies by the middle of the century.

This happened as a domino effect, and with Volvo laying down a marker for a truly emission-free vehicle, it won’t be long until some of its automaker peers start to echo the sentiment. The starter pistol has just been fired on the race to invest in fossil-free materials.

“We are determined to be a climate-neutral company by 2050 in line with the Paris Agreement,” said Martin Lundstedt, CEO at Volvo Group, “This means that our vehicles and machines will be emission-free when in operation, but also that we will review the materials, like steel, used in our products and we will gradually switch to fossil-free alternatives here as well.”

While lifetime EV emissions are three times lower than conventional ICE vehicles, it’s well known that the shift to electric vehicles alone will not fully decarbonize the automotive sector. Not only will the electricity to power the vehicles’ fuel cycle need to come from 100% renewable resources, but so will the power behind its manufacturing and the required material extraction.

Emissions are released at pretty much every step of the car making process. Ores have to be dug out of the ground so that metals – often rare earth metals – can be extracted. These have to be processed into components of specified strengths, while other parts – tires, plastic interiors, paints – have to be integrated and assembled, all by a company that needs to operate its own facilities and employees. 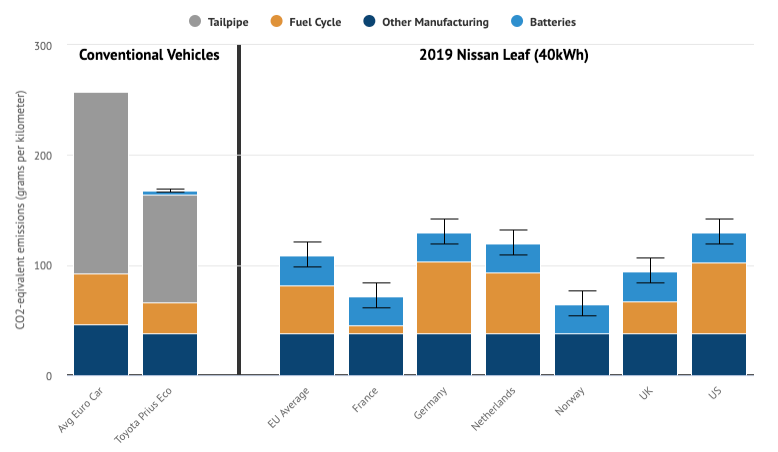 The mining requirements behind batteries in particular, means that current electric vehicles come off the shelf with emissions that are 40% higher than the average car. Polestar’s most recent model, the Polestar 2, leaves the factory with a carbon footprint of around 26.6 ton, compared to around 14 ton for petrol Volvo XC40, and only reaches ‘carbon parity’ with the fossil fuel model after around 50,000 miles of driving.

As within the energy sector, emission accounting needs to become transparent and inclusive of all scope emissions including: Scope 1 – from the company’s internal energy generation for manufacturing and operation; Scope 2 – from purchased energy; and Scope 3 – from all upstream and downstream emissions, which account for around 90% of those in the automotive sector.

While the battery industry currently attracts the most headlines, the steel sector is emerging as an area of first action for these automakers. The automotive sector is estimated to account for 12% of global steel production, meaning that the production of steel for vehicles is directly accountable for 1% of global CO2 emissions.

Through its partnership with SSAB, Volvo will hope to capitalize on the success of the Hybrit initiative – a project aiming to build the world’s first emission-free value chain for steel production. Test operations for fossil-free production started at a pilot plant in Lulea, Sweden, in late-August 2020. Just last week the three companies announced that they had begun building a rock cavern storage facility for fossil fuel-free hydrogen.

Alongside SSAB, other European steelmakers are also aiming to decarbonize production. Thyssenkrupp, for example, recently announced a partnership with Steag to build a 500MW hydrogen electrolysis plant designed to power the company’s steel production by 2025.

In other news in the supply chain, several weeks ago, German auto parts manufacturer Continental announced that it has achieved 100% renewable energy in its production sites and has slashed its emissions by 70%.