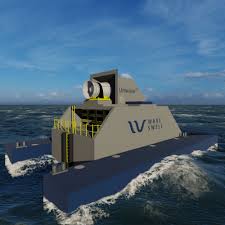 We keep an eye on the wave energy market week to week and try to talk to a provider once in a while who seems to have a promising business model or route to market. This week we talked to Wave Swell Energy – currently developing an extension on its traditional oscillating water column design (OWC), for a 200kW pilot project of its Uniwave system in King Island, Australia.

The company expects the project to be operational by the middle of this year – it’s already 75% to 80% complete – and aims to hit the ground running with several potential project in the pipeline and markets identified in the Pacific Islands and Maldives, which it will approach through small-scale utilities and resort owners, amid the growing hype around green tourism.

This is how wave energy platforms need to operate these days, looking for small scale opportunities in order to find Levelized Cost advantages that it needs to be competitive in larger scale deals.

These small, remote locations will be Wave Swell’s early route-to-market, according to CEO Tom Denniss, who cited the relatively low energy demand and high cost of diesel in these regions, where the cost of fuel alone can reach up to $70 per MWh. With utility-scale solar and wind not really a viable option for small island, the fact that Wave Swell’s systems can double-up to protect against coastal erosion is an additional bonus in giving wave power a rare advantage in electricity generation.

In the bigger picture, wave energy still seems to be the person at the party no-one wants to dance with – as far as renewables go at least. Technological research and pilot projects have persisted amid the booms in wind and solar power, despite only 25 MW being installed worldwide by 2017. In conversation with Rethink, Denniss acknowledged that utility scale wave power is still “a decade away at least,” but rather than due to scalability, he believes that its simply because “technologies haven’t cut it so far.”

This is true. The marine energy sector is almost entirely made up of pilot projects which have yet to gain any real traction since the world’s inaugural commercial project, Islay LIMPET. There have been over 40 attempts to get the technology off the ground, but even the most high-profile technology, such as Pelamis’ ‘sea snake’ design, ceased development after the company went into administration in 2014.

Wave Swell’s technology is not outrageously different to previous OWCs. With a system fixed to the seabed and half of the concrete chamber immersed in water. The water in the chamber attempts to move up and down with approaching waves, displacing air within the chamber, forcing it through a turbine-filled ‘blow-hole’. The company differentiates itself by using hinged ‘flaps’ as valves, allowing a unidirectional turbine to generate power on both the ‘in-breath’ and ‘out-breath’ of the system. Denniss claims that this method can generate up to 15% more power than a bidirectional turbine – largely due to the simplicity of the turbine used.

Denniss was keen to push the idea that the key to wave power becoming cost effective, is in reducing operational costs, which he says his company will achieve by deploying systems close to shore, with no moving parts below the water. “The lack of success based around people coming up with deep water technologies with moving parts in the water, is that they are too hard to maintain,” he said. Parts often suffer due to corrosive and damaging effects from saltwater exposure.

The King Island project was initially planned to have 1 MW capacity but has been reduced to a 200kW pilot stage for now. King Island operates with an ideal wave climate, with consistent amplitudes in the range of several meters. The island is also something of a renewable showcase for Australia, having operated on 100% renewables since 2013 and currently hosting one of Australia’s largest battery storage projects.

A large amount of Wave Swell’s credibility hinges in the success of this project – and the company doesn’t want to state too many key performance figures, until they have been proved in practice. Initial estimates suggest that the pilot project’s LCOE will be similar to that of diesel or coal generation in the region, although the company will hope that if successive orders flood in, that economies of scale will drive prices down to compete with wind and solar.

Having peaked in the mid-noughties, enthusiasm around wave power appears to be slowing down – and new developments are a last gasp chance for the sector. If successful in pilot, Wave Swell’s method of “picking the low hanging fruit,” in remote markets is probably the best route to market for any wave power developer for now. Opportunities for small scale projects will continue to open within developing regions, with ‘green tourism’ offering a strong, albeit niche market. But the scalability of the technology relies on significant cost reduction, and we suspect that as costs continue to fall within wind and solar, that utility scale will be a bridge too far for wave power.

In November last year, we discussed how OWCs have potential to add 20% of power generation, if paired with existing offshore wind farms – but again projects such as those created by Ocean Energy have yet to receive any orders, despite ‘successful’ in situ testing. In 2014, the study by IRENA indicated the LCOE of wave power to sit between €330 and €630 per MWh, and far too high to be considered competitive within the current renewables market. With economies of scale, the report suggests that this is likely to fall to between €113 and €226 MWh by 2030, if more than 2 GW of capacity is installed.

Meanwhile in an unrelated announcement, Mocean Energy (Motion geddit?) announced the launch of its BlueStar wave power project this week, alongside oil and gas developer Chrysaor, to power seabed oil and gas infrastructure in the North Sea. This offshore operations market is typically dominated by offshore wind, and we doubt that pilot projects here will gain traction – but on the other side of the world, players like WaveSwell are identifying small, niche markets where wave power makes more sense, and are more likely to provide an incubator for the technology to reach the scale that’s so far eluded it.