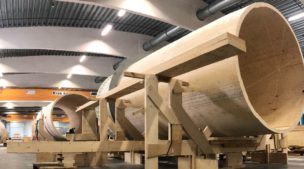 Modvion has installed its first wooden wind turbine tower in Sweden, claiming that its technology could provide cost and carbon reductions across the wind power sector on a commercial scale as early as 2022.

The tower was erected last week on Bjorko outside Gothenburg, standing 30 meters high, and will be initially used for research purposes concerning its design by the Swedish Wind Power Technology Center. Later this year, the tower will become home to a 40 kW demonstration turbine.

Modvion’s towers are constructed from laminated spruce made up of many 4 millimeter layers, with the initial proof of concept built in partnership with Moelven, under the premise that wood has a greater strength per unit weight than steel – the material traditionally used for turbine towers – and can be treated to withstand the elements of onshore wind just as well.

Because of this, Modvion has proposed that wooden turbine towers can be both taller and more cost-effective than those made of steel. Deals are already in place for the company to enter commercial operation from 2022. A declaration of intent has been signed with Varberg Energi for a 110-meter-high tower, and with Rabbalshede Kraft for 10 towers, at least 150 meters high.

Either of these projects would create the world’s tallest wooden structure – the current record is set at 85 meters – and Modvion suggests that towers of over 200 meters are possible. This increase would both facilitate the use of longer turbine blades, as well as the ability to capture greater and more consistent wind speeds at higher altitude.

The physical height limit on steel towers is imposed by the fact that as turbines grow in height, they require a larger base diameter for stability; for towers of 100+ meters, base diameters of 4.3 meters are needed. Going larger than this poses serious issues in logistics, with widths exceeding those permitted on roads in most parts of the US and EU – something Modvion hopes to solve with its modular structural design.

Increased height of structures also required for a greater wall thickness in the tower itself. With wooden structures offering a lower cost than those made of steel, Modvion has estimated that the capital costs of towers are reduced by 40% using its design.

While all of these factors will help to drive down the LCOE of wind power, the key benefit of the technology arguably lies within its sustainability. With wood essentially acting as a form of CO2 storage, Modvion suggests that replacing a 225 meter steel tower with one made of wood would save 2,000 tons of CO2 emissions.

Steel production is extremely carbon-intensive, accounting for around 8% of global emissions. Because of this, turbines can often require a period of over 6 months before they ‘buy back’ their emissions and save enough CO2 from power generation to make up for their own manufacture. While Modvion’s promises of entering operation already in the ‘climate positive’ position, are optimistic, any reduction of steel requirements will have a material impact on lifetime emissions.

This could come as good news to turbine-giants Vestas and Siemens Gamesa in their ambitions to reach net zero emissions – Vestas by 2030 and Siemens Gamesa by 2050. Vestas however, has already stated intentions of exploring biodegradable materials for its products.

Another factor which wooden towers could potentially address is the recycling of turbine components, which is starting to cause some stress through the industry.

Some of this wood may be reused for beams or construction, but the reality could end up seeing structures burnt at the end of their lifecycle. But even this essentially just counteracts the growth of the initial materials in the first place – and could quite easily be sustained through a reasonable forestation program. For steel and composite blades however, a lack of capacity for recycling has seen a significant number of turbine components in landfill. With 2.5 million tons of composite material current in use in the wind sector and 14,000 turbines to be retired across Europe over the next five years, project developers will soon have to address the circular economy for their operations – after all, turbines built to withstand hurricane-force winds aren’t going to break down easily.

In developing its phase one pilot project, Modvion received €50,000 in funding from the EU Horizon 2020 scheme, before going on to obtain an additional €500,000 from unspecified sources of venture capital.

Turbine-makers down but not out, orders continue to grow
NREL sees First Solar chasing cheap perovskite printing at scale