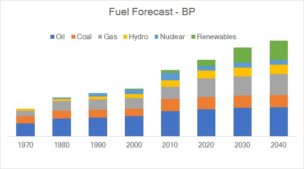 Whether you believe (as BP does) that the world needs to generate less greenhouse gas emissions, while generating more energy, or whether you think we need to actually use less energy to achieve more electric functions, depends on which gods you pray to, we suppose. And in the case of BP, which prays to the big shareholder in the sky, it’s entire forecast for global energy, out this week, reads more like a prospectus than a genuine econometric forecast. Perhaps we need to think about it that way?

People have tried this week to compare the BP Energy Outlook 2019 to two or three other documents – one also out this week, from management consultant McKinsey, which showed energy usage falling far earlier than the wishful thinking of BP, and prior forecasts by rival Shell. Comparisons have also been made with the pathway that the IPCC would have us adopt, which is towards no more than a 1.5 degree increase in global average temperatures by end of century. None of them precisely agree, but the BP and Shell numbers are close to one another, so should we trust them?

Everyone today who writes about that 1.5 degree pathway as “just beyond our reach,” does so more as a case of promoting the idea that it’s not an outrageous disaster to miss the target by a teeny weeny bit, to promote the idea that being an oil or dirty energy company continues to be okay, with a sideways wink to investors. It is certainly within our reach technically, and only political will stands in the way.

But last week we covered the McKinsey Global Energy Perspective 2019, and it showed coal falling more rapidly than the BP numbers, oil peaking sooner and renewables reaching 50% of output around 2035, while both BP and last year’s Shell transition report both highlight the prominence of the roles of oil and gas for longer. Gas is being pushed by all the fossil fuel companies as the lowest carbon output fossil fuel, and an excellent choice for power stations during this transition and long may the transition last. Not everyone agrees.

But McKinsey’s gods are very different from BPs. It has no “vested” interest in the numbers being one way or another. McKinsey prays to the dual gods of economic growth and well managed change. We suspect that both BP and Shell are customers and that they know perfectly well that McKinsey’s numbers are probably more right than theirs.

It is a fine line to walk between “greenhouse denier” and CO2 optimist, and BP and others risk being labeled as “out of touch, the longer they continue to do it. To us, we should be treating any company or country that cannot remain in step with the 2 Degree pathway or better as a pariah, to be distained by sensible investors. It’s quite clear that Shell wants to spend $2 billion investing in renewables, while its capex is $25 billion. Only spending $2 billion on what will eventually be your entire future, especially in a landgrab for renewables, seems to us a dereliction of shareholder responsibility. And Shell is outspending BP, which is effectively fooling itself by presuming that global energy will transition more slowly, and is effectively betting the store on stringing out the transition to renewables. A company stringing out a grab for territory in a new land, is not going to grab enough land. Simples.

Taking this seriously, when a fossil fuel company chief economist prepares a forecast, he (spencer Dale) cannot release it without reference to senior management. If it paints a poor picture of their financial outcomes, or future strategy, then questions would be asked by shareholders. It is likely to be an iterative relationship, with “don’t you think Gas will be stronger for a bit longer?” or “What would be the result if energy usage was 10% higher?” type questions being asked, and the forecast adjusted to reflect that. This is precisely what happens.

Any stock holder looking at the BP report sees two things. First and foremost that the forecast for renewables has gone up considerably since last year’s report, making last year’s report overly optimistic even though it is prepared by the same people. This has been necessitated by the tremendous amount of money chasing renewable contracts. Secondly overall energy usage has been downgraded. BP has moved its numbers closer to McKinsey’s, though not all the way, and also it has not ostensibly changed its strategy as a result. It still says that everything in the garden is rosy, when its future is, in fact, choking on CO2 emissions.

If both of those things happen again next year, we are beginning to enter the realm where the respective strategies for transitioning to the new world order have to become the measure by which these fossil fuel companies are valued. If a company gets its forecasts of how much fossil fuel will be needed in future obviously wrong, it is suicidal for a company that utterly relies on it. If the sector still values these companies by their visible reserves, it makes little sense, as their worth will hit zero around 2070, at a time when their reserves will probably be at their highest. That would be a faux pas of the highest order.

To some extent it is a matter of how you go about the business of forecasting. If you push straight lines directly forward which have been established by a few points in history, you will get the BP and Shell forecasts. If you take into account tipping points, like investors doing so well on renewables that they pile ALL of their funds into it, and the US finally electing a president that does away with the Keystone XL pipeline, because it simply won’t ever really be needed (and because it’s not safe and carries the dirtiest energy on the planet), and the same President bans fracking and signs up for the Climate Change agreements, bowing to voter pressure.

In a genuine forecast you have to foresee such events, as well as the shift in investor portfolios as communities force investors to dump CO2 creating stocks and buy into renewables. These tipping points will mean that every straight line forecast will “get it wrong.”

It’s the same when you look at VC funding into new technology, you get a few successes, and as they exit a hot stock, that money and more is thrown at another 20 similar companies creating a tipping point, a bit like what has happened since 2012 in AI.

This is what we meant last week when we said that there are no guarantees that the power generators and the fossil fuel companies will still be in the count when in 30 years we talk about the largest energy providers.

In the dotcom boom we saw AOL buy Time Warner, a move that created the largest loss in US corporate history, and now that same business has been acquired by AT&T, one of the slow growth, slow response infrastructure businesses that the dotcoms run rings around. There is no reason why similar transitions won’t happen in energy disruption. The equivalent of Google or Netflix in the energy market may well end up buying the remnants of BP and Shell, to extract the last bit of value from fossil fuels before they are banned forever, when in fact right now the surplus funds lie with the oil companies.

People have asked why AT&T is buying into DirecTV and Time Warner, when their margins are impoverished by its own standards. The answer of course is that one day entertainment may decide which phone you buy, and become the wealth creator. AT&T margins in organic subscribers have been falling in cellular for years, and it sees content altering that equation. The poison pill in 5G is that it will create an expectation among customers that data should be about 10% of its current price and then AT&T will need Warner Media.

If we look at the conglomerate energy generators in a few years, they may well have achieved slacker regulation, in exchange for a high level of renewables investment, and as such may need a supplier or group of suppliers, which can supply gas power stations, grow renewables, manage dynamic demand response systems by judicious use of grid scale batteries and renewables, and who can support a continental sized network of EV car recharging stations.

Instead of management tampering with forecasts to make them fit their world view, perhaps they’d do better trying to change their worldview to fit the forecasts.

Otherwise Shell and BP and many other fossil fuel companies will not transition fast enough – while they have the cash, which risks them becoming irrelevant.

Another piece of news in this week is about just that, with Shell acquiring Sonnen in Germany, which offers home based Lithium Ion batteries, competing with Tesla, and its famous Powerwall.

Sonnen is described as a leader in smart, distributed energy storage systems and it can almost certainly act as a focal point for Shell’s efforts in EV car charge points, and grid scale battery, to add to Sonnen’s existing home battery business.

This is not so much the right hand (at Shell) not knowing what the left hand is doing, but more a case of forecasting energy in keeping with its worldview but ignoring that forecast, because the clock is ticking faster, than it is letting on, and piling with indecent haste into renewables.