The China Energy Storage Alliance (CNESA) has released its Q2 analysis of the energy storage market, finding that the world has reached 10.1 GW of operational battery storage capacity, of which China accounts for 1,831 MW. Our own forecast for global BES (Battery Energy Storage) reaches 14.2 GW by year end, and was due to add 7.2 GW this year, so the Chinese numbers seem about right. 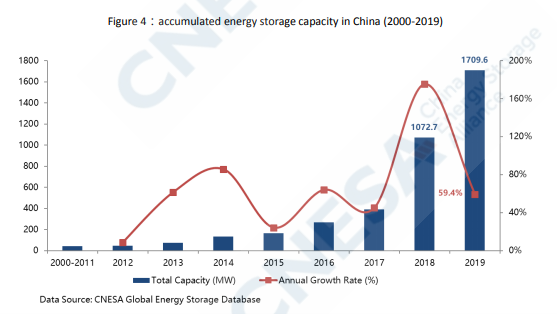 SunPower has recently commissioned a 2.2 GW solar complex in China, complete with a 203 MW 1-hour battery co-located. This is now fairly typical of solar projects in China, where an ever-growing list of provinces have imposed a battery storage requirement for renewable power projects.

Reports earlier in the year have suggested that the 14th Five-Year Plan will add 300 GW of solar power and 150 GW of wind power, even before Xi Jinping’s 2060 carbon-neutral pledge at the UN.

In October 2017 China’s Ministries of Finance, Science, and Industry, together with the National Energy Administration, put forward the Energy Storage Action Plan 2019-2020’, under which battery energy storage would have its R&D and demonstration in the 13th Five-Year Plan period (which ends this year), and would then be able to enter the commercial mainstream in the 14th Five-Year Plan period, from 2021 to 2025.

In other words, the next few years will see mass-scale addition of battery energy storage to the Chinese grid. CNESA expects between 15 GW and 24 GW to be installed by the end of the 14th Five-Year Plan in 2024.

China Galaxy Securities released a report in September which attempted to predict the impact of the 14th Five-Year Plan. It predicted a much higher value of 5 GW to 10 GW of 2-hour storage per year through to 2024 for the grid. It also predicted that the 5 million 5G base stations predicted to be built in China will feature between 59 GWh and 98 GWh of energy storage capacity, built into the grid to enable them to run continuously.

Guangdong Province by itself last month announced a target of 2 GW capacity by 2025. Guangdong is a south coastal region which may come to play an outsize role in green hydrogen.

While some projects will certainly serve the purpose of shifting solar power four hours forward to the evening hours of peak demand, China already has 30 GW of pumped hydro storage, as well as a substantial portion of its solar located in the far west of the country – when it’s evening in Beijing, it’s even earlier in the day in Xinjiang, and there are low-loss cables between the two.

This will make the other two grid-related uses of battery energy storage, namely smoothing the output of renewable projects as with SunPower’s 2 GW complex, and voltage/frequency regulation, more prominent. Neither of those requires the long 4-hour duration which is the norm for battery projects in, for example, California.

Another use would be to ease transmission restrictions – storing power which can’t be transmitted down a temporarily congested line. This would reduce how much highly expensive transmission infrastructure has to be built.

According to Pei Zheyi – former deputy chief engineer of the State Grid National Research and Development Center – China’s renewable energy capacity could reach 1380 GW in 2035, with a daily output fluctuation of at most 600 GW as an absolute maximum; which will require a commensurately vast apparatus of energy storage to balance.

One thing to look out for in the 14th Five-Year Plan is an expanded business model for energy storage; at present batteries participate in concert with renewables, but for auxiliary services the regulatory framework is patchy and varies by province. This can make it hard to guarantee a proper return on investment.

The next Five-Year Plan might contain a pricing mechanism to reward energy storage capacity for its true value; considering the rapidly approaching end of renewable subsidies, battery storage requirements for renewable projects may otherwise exert an unwanted levels of cost pressure on renewable project developments.

A related issue is that many provinces are introducing battery capacity requirements for wind and solar installations, but regulations concerning their quality and participation are not thorough as yet – which could effectively mean regulatory pressure in favor of shoddy installations, concerning since battery installations can catch fire or even explode.

At the end of 2019 solar projects in the country had 800 MW of storage co-located, though this figure includes non-battery storage types such as molten salt and compressed air. China has become the leading country for CSP development with a very wide portfolio of pilot projects being developed at present, especially in Tibet and the north-west desert; and in July, the Chinese Academy of Sciences Institute of Engineering Thermophysics commissioned a 100 MW compressed-air energy storage device.

Sweden early to adopt hydrogen pathway to net-zero steel
What would you give for an energy forecast that was spot on?