State Grid has stated in a “carbon peak and carbon neutral” action plan that it expects UHV transmission capacity to reach a combined 105 GW by 2025 – the end of the current Five-Year Plan – across its own network which spans most of the nation, plus the five provinces managed by Southern Power Grid. Of this 105 GW, over half is still to be built.

Since the first inclusion of Ultra-High Voltage (UHV) lines in state planning in 2006, and the first commissioning of such a line in China and the world in 2009, China has become the world leader in UHV transmission line development. It has 35 such lines commissioned spanning 34,500 kilometers, with 450 TWh transmitted annually. Since 2018 development of UHV has restarted from a pause, with at least five new lines completed in 2021 alone.

UHV is generally defined as over 1000 kV AC or ±800 kV DC, offering power losses of only 5% to 10% over several thousand kilometers, and 25% lower cost per unit capacity than lower-voltage options. During the 14th Five-Year Plan it’s expected that ten DC and ten AC lines will be approved, and the two types of UHV line are about half and half among under-construction projects also. DC is more efficient, but requires substations, so it takes on the long-distance role from the outlying provinces while AC is used for the still considerable distances spanning the central heartlands.

From now on new transmission lines in China will primarily be about expanding connections from northwestern desert wind and solar, but so far southwestern hydropower – in the highlands leading to the Tibetan Plateau – has been just as great a motivator for building such lines, with one recently completed line leading from the also recently commissioned Baihetan hydropower plant in Sichuan all the way to the Jiangsu coastline north of Shanghai.

Coal power remains the majority of China’s power mix, but already power transmitted on these lines is 43% renewable, and the proportion will pass 50% by 2025. Even for coal it has been useful to avoid transportation costs – the relatively sparsely populated northeast is a hotspot of coal production and coal power plant capacity.

Of course it is much more cost-effective to simply transport coal than to build an UHVDC transmission line: moreover, some of these lines have been built earlier than needed, with only partial utilization since, or with capacity being built to use them only years later. So this is a technology that allows for grand infrastructure and grand plans for the future, but short-term financial efficiency has been forgotten at times to say the least.

It is a far cry from the US where local approvals are an insuperable obstacle to long-distance infrastructure and some grids like Texas are segregated from the rest of the nation. 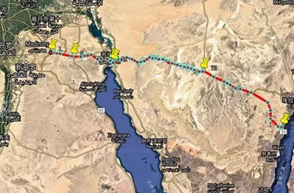 In 1989 China’s first ±500 kV transmission line was built entirely using foreign equipment and technology, and the country was 35 years behind the example set by the then world leader in the field – the Soviet Union. These days the tables have turned and it is Chinese equipment and companies building such infrastructure abroad – beginning with a Brazilian federal project approved in 2017, and with the Saudi-Egypt line to span Sinai awarded more recently. In due course Southern Power Grid will be overseeing the Chinese end of a new transmission network expansion – one stretching over into Indochina.