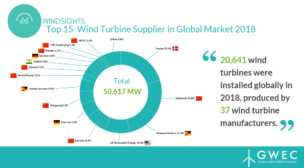 Global Wind Energy Council (GWEC) has come out with a first run of its new market intelligence service, showing that the wind turbine industry is consolidating fast. The GWEC report says that 7 smaller suppliers were pushed out of the market during 2018. This is after several years of acquisitions, with GE for the past 3 years trying to buy its way into Europe with deals at Alstom and LM Windpower, Senvion’s continued troubles and Fred Olsen buying industry equipment supplier Wind logistics already this year.

The efforts to reach lower pricing in time for various regions shifting towards buying electricity based on a parity basis, and not taking into account feed-in tariffs, subsidies or Renewables Obligations, has pushed all these companies to the limit and Rethink believes this will go on for at least another 3 years, as country by country parity becomes the norm.

The top five suppliers now hold around 61.8% of the market, with market leader Denmark’s Vestas, by dint of its brave efforts to go global, landing a dominant 20.3% market share. All of these top suppliers have had to slash pricing from bid to bid, and can now boast an LCOE (Levelized Cost of Ownership) in their best onshore wind deals at close to $0.03 per kWh. This means they are within a few more cuts of beating out every form of energy on the market, with solar LCOE also breathing down wind’s neck, making even larger cost cuts per annum, but coming from a higher mark.

The report shows a distinct bias when it comes to China, where most Chinese suppliers do well inside China and have virtually nothing outside it with the exception of Goldwind. Outside the top 8 no company has a market share better than 2.5% and all these rivals could be topped by simple cash flow issues or one major problem. Rethink has said that the coming renewables market will make more billionaires than tech, but getting to parity pricing with rival technologies is the first and most vital step.

GWEC says that it has mapped the installation of 20,641 wind turbines installed in 2018, adding some 50.6 GW, so an average of 2.452 MW per turbine. This more or less tallies within a GW with the capacity that Irena (the International Renewable Energy Agency) reported wind adding during 2018.

The report also highlighted the different types of drive and their market leader with Vestas, Mingyang and Goldwind the dominant suppliers for each of the three turbine technology categories, high-speed geared drive, medium speed geared drive and direct drive, through 2018.

The market share of conventional high speed geared systems and medium speed turbines increased to 69.7% and 3.7% respectively in 2018, while the market share of direct drive wind turbine dropped nearly 2% to 26.6% mostly due to a fall in Germany’s Enercon sales.

Goldwind moved up a position because its its domestic market share jumped by 5.1% and Siemens Gamesa fell to third place, primarily due to lower installations in the UK, Germany and India. However in the coming 3 years floating wind is expected to make an entrance in commercial systems, so it may claw this back through involvement there. None of the Chinese firms are thought to have much involvement in this market, because China is not a suitable market for it.

Feng Zhao, Strategy Director of GWEC, said, “In 2018 we saw further consolidation taking place on the supply side. The severe competition resulting from the transition from Feed-in-Tariff to auctions pushed another seven small turbine OEMs out of the market last year. This trend is likely to continue in China – although there are 19 local turbine OEMs active in this country, the upcoming auction and the central government’s goal to reach grid parity in the early 2020s will certainly force many small and medium-sized Chinese turbine vendors to give up their wind turbine production activities”.

GE Renewable Energy only remained in fourth place because it is the market leader in the US which grew (By 0.5 GW). Envision replaced Enercon in fifth place, mainly due to its strong growth in China and the sharp drop of installations in Enercon’s domestic German market in 2018.

Chinese suppliers Mingyang, United Power and Sewind moved up to seventh, ninth and tenth respectively, which can be largely attributed to stable performances in their home markets. Suzlon dropped out of the top 10 turbine supplier ranking in 2018, primarily a result of reduced installations, by up to one third, in its home market of India. Senvion fell three positions to 12th, with new installations in Germany in 2018 halving compared to the previous year.

The full report is only available to GWEC members and includes 30 tables.