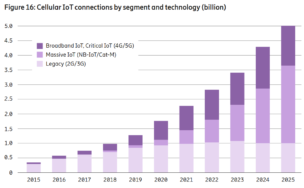 Ericsson has released its latest Mobility Report (formerly the Mobility Index), finding that while Cellular IoT connections will reach 5bn units in 2025, some 1bn of those are going to be legacy 2G and 3G links, with around 1.4bn being 4G and 5G. The Massive IoT section, which is the LTE Cat-M and Cat-NB, is counted separately from the 4G part, and will constitute around 2.6bn units in 2025 (52% of all C-IoT). This puts non-cellular IoT devices on around 400mn units, by Ericsson’s count.

It seems somewhat mad that in 2025, the number of deployed Legacy devices still sits at 1bn. Given the MNO desire to refarm that valuable spectrum into LTE and 5G, 1bn Cellular-IoT devices still stuck on 2G and 3G is worrying. We should be seeing the Legacy sector declining, but based on this graph, it grows slightly in 2023 before sitting at a flat billion for 2024 and 2025.

That we have another 3 years until Ericsson believes we hit the zenith of Legacy devices is concerning. This means that this industry will still be deploying devices in that time, while the MNOs all publicly talk about 2G and 3G sunsets. There are either going to be some very unhappy customers in the next few years, or the sunsets are going to take a lot longer to implement.

Put another way, for every Legacy device Ericsson expects in 2025, there are 2.5 L-LPWAN devices. Even in 2025, Legacy devices make up 20% of the total Cellular IoT portfolio, with L-LPWAN on 52%, and the remaining 28% on full-fat LTE and 5G connections. By this measure, there are only going to be 1.8 L-LPWAN devices (low-cost, low-power, long-life) for each blazing-fast LTE IoT device. That’s not a strong ratio, given what we’ve heard from the marketers.

The report itself doesn’t dive into any great detail on the IoT side of things. Ericsson argues that Cat-M and Cat-NB are complimentary, and that of the 114 MNOs that have launched at least one of them, around 25% are supporting both. We would argue that this is not proof at all of this sentiment, especially as one of the main selling points of these L-LPWAN technologies was their ease of upgrade – that software alone could see an MNO support the new specifications.

North East Asia (China, Japan, South Korea, mostly) accounts for 60% of the global total for Cellular IoT in 2019, and will grow to 68% of the market in 2025. Ericsson says this reflects both the ambition and size of the C-IoT market in that region. China’s governmental support for LTE Cat-NB is not mentioned.

Broadband IoT is defined as being higher throughout, lower latency, and larger data volumes than Massive IoT’s Cat-M and Cat-NB. However, there is not further detail on what proportion of that sector is comprised of LTE Cat 1 – the stripped-down version of LTE Cat 3.

Critical IoT is defined as both a wide-area and local-area use case, with extremely low-latency and ultra-high reliability requirement. Ericsson says that the first such modules will appear in 2020, but that in 2025, Critical IoT will constitute only a small fraction of total connections – to the extent that it does not even include it on the graph.

Given what we know of Japan and South Korea’s scale, this would suggest that Chinese Cellular-IoT demand accounts for around 58% of the global market in 2025, with the bulk of that being Cat-NB. This is not exactly a good look for the LWPAN sector, especially as the Chinese market is rather impenetrable for non-domestic competitors.

As Cat-NB is being so heavily backed by the Chinese government, you can conclude that the vast bulk (pretty much all) of that 58% share constitutes Cat-NB. This then leaves the remaining 42% to be divided between the rest of the world and the MNO choices between Cat-M and Cat-NB. If the rest of that 42% were split exactly in half, that would give Cat-M a 21% share of the global L-LPWAN market in 2025 – and we suspect that Cat-NB devices will prove more popular in the rest of the world, meaning that Cat-M’s actual share would be lower.

This isn’t touched on in the report, which is disappointing. This IoT section is dealt with in one page, while Ericsson spends the next two pages waffling on about Automotive IoT without a single mention of the continuing dust-up between DSRC/802.11p and the C-V2X alternative. A two-page case study from SK Telecom is then followed by a four-page one from MTN Ghana, and suddenly, the reader is ten-pages removed from the IoT networking content that actually caught their eye, and wondering if they want to carry on reading about how MNOs bundle SIM packages with other services. It’s somewhat frustrating, given Ericsson’s birds-eye position from which it could enlighten us.

In the Network Coverage section, Ericsson says that global 4G population coverage is at 75%, and will reach 90% by 2025. To date, 311 of the 777 commercial 4G networks are LTE-Advanced (Cat 4 and above), and 36 are Gigabit LTE (Cat 16 and Cat 18). There are around 50 commercial 5G networks, according to the report. Ericsson believes 5G will be deployed faster than any other mobile communications technology. It expects 5G population coverage to grow from less than 1% today to between 55% and 65% in 2025.