The European Union has finally laid out a strategy for its near term decarbonization, targeting a 55% reduction in emissions by 2030. But while the blueprint’s backbone is now in place, two years of haggling will follow, with some of the bloc’s 27 member states – especially in the East – being more resistant to take on the costs of such an ambitious plan.

The 55% reduction in emissions will be based on levels set in 1990, from which the EU has already managed a 24% reduction, despite an economic growth of 60% over the same period. The EU currently accounts for just 8% of global emissions but hopes for Europe to become the world’s first carbon-neutral continent by 2050, setting an example for the likes of China and the US, which have both recently outlined similar plans to reduce emissions: China aiming to see emissions peak in 2030, while the US is hoping for a reduction of between 40% and 43%, both in the pursuit of long-term carbon neutrality.

While many environmentalists have called for a reduction target of up to 70% by 2030, keeping coal-heavy states like Poland and the Czech Republic happy through this has had to come with some compromises. Talks surrounding these proposals have been consistently thwarted by industry and lobbying groups from these countries. With the new proposals being gradually phased in from 2023 onwards, sharp negotiations continue, while protectionist trade-related policies could face objection from the US and the World Trade Organization (WTO).

Increased from a previous target of 40% back in June, however, even at 55%, the political importance of the EU’s roadmap is undeniable. Along with the UK’s 68% target, it will be a key incentive for other economies to follow suit through talks at the upcoming COP26 summit in Glasgow.

The European Commission’s raft of 12 proposals to reach this 55% target – referred to as ‘Fit for 55’ – span across energy, land use, transport and taxation policy, all contributing towards the European Green Deal.

President of the European Commission, Ursula von der Leyen, said “The fossil fuel economy has reached its limits. We want to leave the next generation a healthy planet as well as good jobs and growth that does not hurt our nature. The European Green Deal is our growth strategy that is moving towards a decarbonized economy. Europe was the first continent to declare to be climate neutral in 2050, and now we are the very first to put a concrete roadmap on the table. Europe walks the talk on climate policies through innovation, investment and social compensation.”

The EU Emissions Trading System (ETS) is at the core of the EU’s proposals, having been hailed as the primary driver behind the bloc’s power sector emissions falling 42.8% since its inauguration in 2005. Working as a cap-and-trade system, emitters from the encompassed sectors purchase and trade a limited number of credits for every ton of CO2 they release, while the cap on available credits is reduced each year in line with emissions targets.

The commission is now proposing that the overall cap on these emissions is reduced, along with its annual rate of reduction – from 2.2% per year to 4.2%. It is also set to eliminate the allocation of free allowances to the aviation sector from 2030 and to start including shipping emissions in the scheme for the first time. The EU ETS will now see a 61% reduction in its cap between 2005 and 2030. Expectations of stricter rules has already helped send carbon prices to record highs this year. 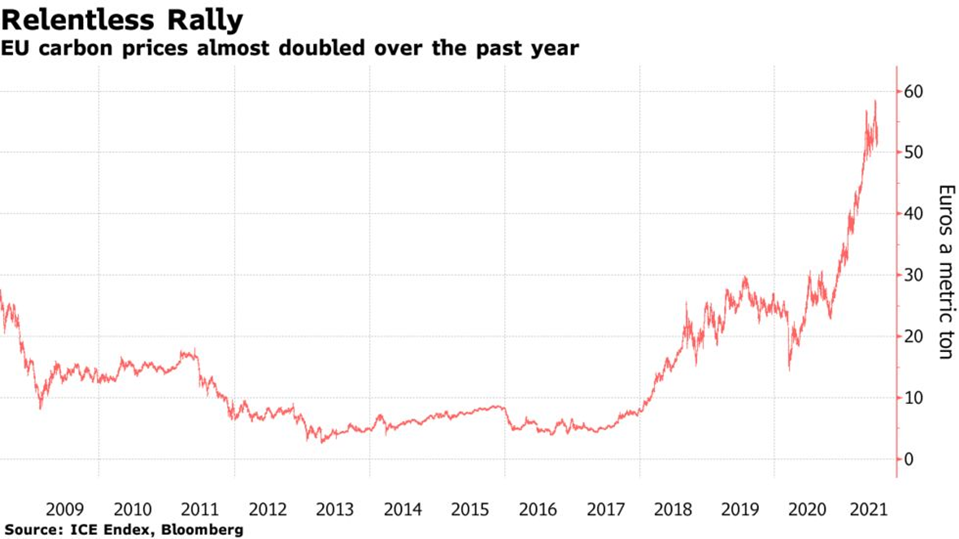 In announcing this, European Commission President Ursula von der Leyen cited the fact that one single cruise ship emits CO2 at the same rate as 80,000 cars. While road transport and buildings are not yet included within the conventional EU ETS, despite being embroiled within 57% of the bloc’s emissions, the commission is hoping to establish a separate ETS to account for the emissions from the distributed fuels within these sectors.

A new Carbon Border Adjustment Mechanism will also be implemented to put a carbon price on imports of an as yet unspecified selection of products, although iron, steel, fertilizers and aluminum are inevitable contenders.

This should help limit the number of carbon-intensive products entering the European market – largely from Asia – while minimizing the risk of ‘carbon leakage,’ where heavy emitting manufacturers within the bloc choose to set up production facilities in less regulated markets. The mechanism will also help protect EU companies from losing out to more lightly regulated rivals.

To compliment this taxation, the EU will also make it mandatory for member states to spend the revenues from emission trading schemes on climate and energy-related projects, with an encouragement for this to focus on the possible social impact on vulnerable households, micro-enterprises and transport users. One analysis has suggested the commission’s proposals could add an extra €429 to average household energy bills, and a €373 increase in driving costs. Considering the threat of populist movements such as France’s Gilet Jaunes, this is something that has to be addressed.

The proposals also include an Effort Sharing Regulation, which assigns more stringent emission reduction targets for each member state across all sectors. Targets have been specified based on the GDP per capita of each individual country, theoretically preventing the energy transition of poorer nations from being disproportionately onerous.

In a similar manner, member states will share responsibility for removing 310 million tons of CO2 per year through preserved natural carbon sinks. By 2035, the bloc is hoping to be climate neutral in the land use, forestry and agriculture sectors. This should be bolstered by the EU’s Forest Strategy, which aims to plant three billion trees by the end of the decade.

In terms of energy production, which currently accounts for 75% of emissions across the EU, the Commission’s Renewable Energy Directive sets out a target for 40% of energy to come from renewable sources by 2030 – again, varying between member states, with specific targets set across sectors like heating, transport and power.

The plan also pretty much sets out a deadline for ICE vehicles across the bloc, with a requirement for the average emission intensity of new vehicles to fall by 55% between 2021 and 2030, before a full 100% reduction by 2035. On major highways, member states will be required to install charging points every 60 kilometers, with a hydrogen refueling station every 150 kilometers.

As we outlined last week, the long-term benefit of policies like these significantly outweigh the costs. But in the short term, large capital investment will be most necessary in heavy-emitting countries, which may not have the financial clout to fund their own transition. Along with the revenue from carbon pricing mechanisms and schemes like the Just Transition Fund, a new Social Climate Fund has been proposed to spread €72.2 billion across member states between 2025 and 2032, which will be match-funded by its beneficiaries.

Of the EU’s long-term budget over the next seven years, some 30% – around €2 trillion – can be attributed to supporting climate action.