Renovagen’s Fast Fold system, a man-portable thin-film solar design with battery storage, which can be deployed and packed up in just a few minutes, is being used to power Covid-19 test analysis equipment in Zambia. First Aid Africa, which is a Scottish NGO, has 2 Fast Fold units in Zambia and will be loaning one to the testing organisation specifically to support the fight against the Coronavirus.

Besides Humanitarian Assistance and Disaster Relief (HADR), other customers for the system, potential or actual, are mining exploration, events, telecom base stations, filmmakers, agriculture, and the military.

Other 2020 developments for Renovagen include a partnership in Saudi Arabia with Upgrade for Electronics and Home Appliances, which will be deploying several demonstration models this year once lockdown allows.  Here the system has applications for desert camping trips, the tourist industry, religious festivals and the military. A number of NATO militaries in Europe have shown an interest.

Renovagen is a British company founded in 2012 which started out with a larger design called Rapid Roll, to be deployed from a vehicle trailer, which has had some good pilot placements. When further R&D financing is secured, this could be scaled up to be deployed from a side-opening in a 20ft or 40ft shipping container – but this larger form remains only a concept for now. A Rapid Roll ‘I’ in a 20-foot ISO container could be deployed via helicopter and with future solar cell improvements, one container could produce 600 kW. 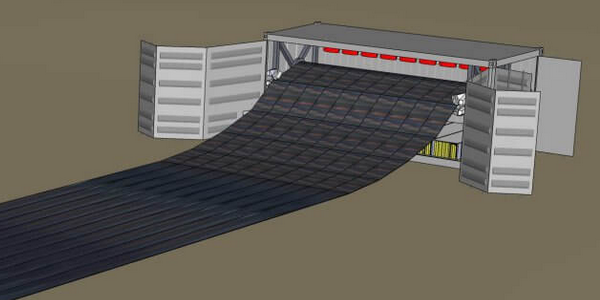 However, based on feedback from humanitarian and disaster relief organisations, Renovagen switched its attention in the past 2-3 years from Rapid Roll to the smaller, man-portable Fast Fold system.

The Fast Fold design has 3.4 kWp of solar power and 10 kWh battery capacity with two batteries and solar panels fitted, or 1.7 kW solar and 5 KWh battery with only one of each. It can be carried by a few men and has two elements – the Energy Hub, which contains the battery, inverter, management system and other electronics, and the solar panels themselves. Unlike the Rapid Roll system, which unrolls as its name suggests, the Fast Fold system unfolds like a concertina. 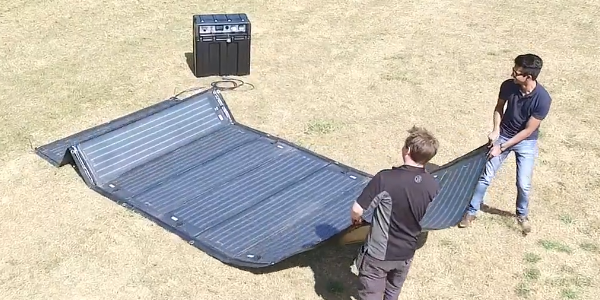 The solar panels are about 2.5 meters long, and when packed away, fit into a bag which can be carried by two men. The Energy Hub weighs around 100 kg, and the company says it can be transported by four people, and the whole system can be set up or packed away in minutes. Powering on the system is simply a matter of connecting the panels to the Energy hub and pressing the ‘On’ button – no solar expertise required.

The panels are resilient in the face of issues such as high angle of incidence, shading, or misalignment, thanks to a modularized management system that balances power flow where a typical solar installation would run into trouble. The panels are also waterproof and quite hardy in the face of physical stress. In windy conditions, pegs can be hammered through eyelets to hold the panels down, and they’re also the right size to be tied to the roof of a shipping container.

The strongest application for this is disaster relief and humanitarian action, but there’s also been a lot of military attention. The appeal of the system is that it’s not just easy to deploy and operate with no solar expertise required, but can also be rapidly re-deployed.

The price range is £17,000 – £34,000 at present, at least three times more than domestic ‘six-panel’ solar installations. But this direct comparison is a red herring – as the Fast Fold system’s design allows the user to move the system on a regular basis.

The real comparison should be the true cost or ‘fully burdened cost’ of getting the fuel to field diesel generators in the most difficult and remote locations.  In these circumstances the cost of fuel is much higher – for example, the US military calculates that the cost of transporting fuel to the most remote Forward Operating Bases (FOBs) in Afghanistan was more than $400 a gallon.

Renovagen says that the 45 Commando Royal Marines have used the Fast Fold system and given positive reviews. In a Command and Staff Training Exercise in Scotland a couple years back, they replaced some of their 2 kW Lightweight Field Generators (LFGs) at their field headquarters with a Renovagen system and claimed it saved 87% of the fuel they would normally use.

A common observation from those working with this hybrid setup is that this reduces the noise of power generation – greatly improving the quality of the workspace. This also has military implication for stealth – reduced noise, and reduced heat signature to be spotted by drones. Some companies are also working on different-colored solar panels, which will make camouflaged solar panels a possibility.

For military and humanitarian relief especially, the advantage of switching to solar goes beyond just fuel cost savings. In both war and disaster, fuel supplies can come under threat from accident, enemy action, or theft. A localized power supply makes operations more resilient, and relieves manpower from transporting fuel securely to the destination.

Renovagen opened its USA office a little over a year ago, in Fort Lauderdale, Florida. Discussions have begun with the military there, and the office can be used to push into North America, Latin America and the Caribbean.

So far, two large American Telecoms companies have made one purchase each, in order to temporarily power remote towers. One company with an association with disaster relief says it may also use it in that capacity.

Another use-case being examined is mining. Despite the recent spread of solar-powered mining especially in Australia’s Pilbara and Chile’s Atacama deserts, well-established mining sites involve heavy-duty power or connection to the national grid: Renovagen’s systems, even the larger Rapid Roll, would be used more for powering prospecting work. We could see exploration happening in a hub-and-spoke format, with a central headquarters surrounded by drilling sites. The Fast Fold system could be brought along for powering the life support elements of the site: air con, lighting, computers, labs to analyse ores, and so on. Renovagen is in contact with several mining companies each in Chile, Australia and Latin America.

Agriculture is another promising avenue – deploying and re-deploying solar on unused, fallow land depending on the time of year.

The concept behind the founding of Renovagen comes from CEO John Hingley’s trekking in the Himalayas, using a portable fold-up solar panel to recharge his phone and laptop. When the 2011 earthquake struck in Katmandu, causing power outages in one province of Nepal, this made Hingley – wouldn’t it be great to scale the solar up? Renovagen was founded the next year.