The first two European utility numbers out for the first half of 2020 show vastly different outcomes with Iberdrola impressive, and Vattenfall disappointing, but both are reactions to the same pressures from Covid-19 and the corresponding reduced consumer energy usage.

The two stories in a nutshell are that Iberdrola numbers – in its home country of Spain, in Brazil, the UK and the US, where it owns Avangrid – had lower electricity usage, but it was paid for by lower fuel prices, while VattenFall, in its native Sweden and nearby Germany, reflects a material impairment on coal assets that it still owns, as the pandemic exposes the inability of coal assets to compete.

Vattenfall is nowhere near as advanced in its shift to renewables as Iberdrola, and its strength is in nuclear reactors, some of which have had to be turned down throughout the pandemic and others which have made a comeback early, after a maintenance outage and saved it more embarrassment. It is best known for hydro, which has been strong in the past quarter, and some coal. It has minimal wind assets, some of which must be quite old as it has also written down wind assets by SEK 1.5 billion ($170 million).

Revenues for the half year were 5.7% off at Vattenfall, down to SEK 79,440 million, and its EBITDA was significantly up from SEK 20,102 million, to SEK 25,152 million ($2.27 billion to $2.84 billion). But its write downs were huge, around $1.2 billion in Q2, taking the operating profit for the full half year to $597 million, and resulting in an overall loss ($180 million). This was despite currency fluctuations working in its favor, so the losses could have been worse.

Vattenfall is about to bring online what will be the world’s largest offshore wind farm Hollandse Kust Zuid 1-4 in the Netherlands, which shows in effect, that it has moved too slowly off nuclear towards renewables, but it is fixing the problem now.

Before the results call, the CEO Magnus Hall, made it clear that he would be standing down, and that the search for a new CEO was underway. He said the reasons were entirely personal, but he has only been there 6 years, and it looks to us more like an admission of poor strategy, or at best a job only half done, which has exhausted him.

One interesting fact from the Vattenfall report was that the average Nordic electricity spot prices were 84% lower in the second quarter of 2020, compared with a year earlier and that during the first half of the year the system price peaked at around €30/MWh, but fell recently to under €1/MWh – an historic low.

This revenue fall was due to the fall in commodity prices, especially in wholesale markets, but was offset by purchases made by what it describes as a liberalized supply businesses, and by the existence of it signing fixed price sales contracts (PPAs).

During the period, agreement was reached with Siemens for the sale of Iberdrola’s 8% stake in Siemens Gamesa, for €1.1 billion with a net gain on the deal of €485 million, which was not included in the final numbers, taken as an extraordinary item.

All of this was done on practically the same number of direct consumer clients in each territory, with a few percentage points up in one, and a few down in another. And in the US Iberdrola still supplies about 1 million customers with gas.

Interestingly Iberdrola managed this performance despite Spain’s decision to get out of coal as a nation, with Iberdrola increasing revenues for Spain’s hydro and solar and dropping coal revenues by 59% and gas by 26%. The transition rate at Iberdrola remains astonishing, viewing the table below, which shows how rapidly it moves upwards in renewables capacity against this time last year. 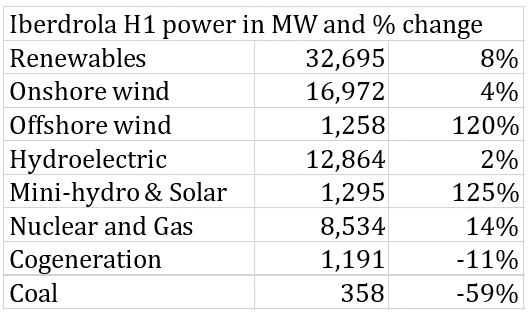 Not by any means a utility, ABB’s numbers were also in, but much of its fortunes are tied up in transport and energy infrastructure equipment, so we thought we’d mention them.

Its Q2 results out this week ABB showed order intake down 18% to $6.1 billion, revenues off 14% to $6.2 billion with Net Income up on last year by 16% to $695 million, but that mostly benefitted from being compared with last year when it took a charge for selling off its inverter business at a loss.