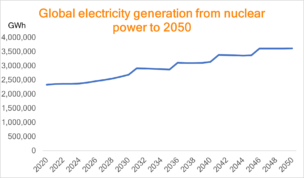 The energy market falls into two categories – those people who eagerly await reports from the IEA (International Energy Agency) and those who shrug when they see those reports advertised because they think little of them. Rethink Energy falls into both camps.

This is because the IEA has lots of highly qualified people, who are in contact with many energy agencies around the world which provide it with data, and it presents this neatly and in an entertaining and organized fashion. This data is almost always accurate.

We would not say that the IEA has no experience in forecasting, it has had  plenty of attempts to forecast future data, but it has almost never done this successfully, so when this week’s annual major report from the IEA, the World Energy Outlook 2022 arrived, our first mission is to sort through the 524 pages to look for major mistakes in its forecasting regime. There are too many to list fully here.

The first mistake is having three outcomes, when the world will only have one. The whole point of forecasting is to forecast, not to sit on multiple fences, saying if this happens or that happens, then we see it this way or that way.

It offers its STEPS (Stated Policies Scenario), its Announced Pledges Scenario (APS) where all governments meeting their existing pledges and the Net Zero Emissions by 2050 (NZE) where everyone adjusts their pledges to reach net zero. At no stage does it tell you which will happen.

Well we will put you all out of your misery – don’t bother to read the first two scenarios as the world is already accelerating away from the other two positions.

The single Rethink Energy scenario assumes that “business as usual” (STEPS) cannot happen because it is too expensive, and we point instead to some pledges which will be met and some which will be missed (APS). It’s funny that India always misses its targets by about four years, and that China always beats its targets by almost as much – but it is no good looking at a scenario where they both hit their targets on time because that has never happened in the past.

The Rethink Energy view is that while we will not have net zero by 2050, we will get very close and that sometime not long after 2060 this will finally be achieved.

While the IEA talks about $trillions being invested, until it picks one of these scenarios it cannot even attempt to tell you how much will be spent. This is because learning curves apply to all complex technology, and the speed of embracing that technology is affected by the speed of change. You must start by working out how fast it will transition and then work out what that will cost.

The IEA also sees a big future in nuclear. This is a mistake. Yes, we may see total nuclear output rise from 2,360 TWh per annum from nuclear to 3,611 TWh by 2050 (see graph below) and that will be a major success for some nuclear operators, but it does not touch the dial – renewables will double 3 or 4 times over in the same timeframe. 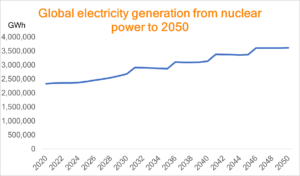 There is a simple reason for this – nuclear is uneconomic costing around $120 per MWh compared to a global average for solar of around $30 per MWh. It has ten year lead times, and even Small Modular Reactors which might reach as low as $65 per MWh, won’t happen for 5 to 7 years, and then only in single installations at first. And by then Solar will be at $20 per MWh.

Yes we accept that solar alone is intermittent and that it will need battery to make it perform like baseload, but that too will be cheaper than new nuclear and is already way cheaper than old nuclear.

Now the fact that nuclear is uneconomic does not stop it lobbying uninformed politicians and getting subsidies to bring it into line with normally observed electricity prices. But the simple truth is that without government involvement, no investor is going to accept the losses offered by nuclear. And the energy transition needs to happen fast, so it cannot always go through government. Yes nuclear will grow, no it will not grow much.

The first conclusion you read in this document is under the STEPS scenario that the IEA sees oil demand rising until well into the 2030s. This is irreconcilable with the number of EVs on the roads. So the STEPS scenario requires Europe and China to change their collective minds and not ban ICE cars by 2035. Does anyone out there really see any indication of that or any scenario where that becomes possible in the future? No of course not. That is a Darren Woods (ExxonMobil) wet dream.

The IEA admits that solar manufacturing is growing so fast that if it is all used it will exceed predicted deployment levels. Well it needs to reconcile that. What happens to resources where over manufacturing happens? In the past in all other technologies the price falls until all of the capacity is used anyway.

And the obvious result of this will be to promote further solar sales. As a result the STEPS forecast is a total waste of time because it is clearly and demonstrably wrong.

The IEA says that investment must rise from $1.3 trillion a year today, to $4 trillion a year by 2030. Rethink would argue that we are on track for that because every penny currently spent on fossil fuels must find a new home or risk being stranded and investors are not idiots and can read the writing on the wall once the message becomes urgent.

The IEA points out that supply chains for renewables are fragile, which we would agree with, but this is creating a feeding frenzy in the mining markets… and a lot of early investment will go there and is going there, $billions of it coming from the US government.

The IEA also has it that under one scenario $650 billion a year will be spent on upstream oil and natural gas investment to 2030, if clean energy investment does not accelerate. Think about it. If voters do not send clear green messages to their politicians that they will get rid of them if there is any backsliding, the IEA seems to think that the oil companies will make a comeback and go looking for more fossil fuel assets. And yet no new refining capacity nor many new oil fields are being opened already, never mind by 2030. Gas may be the only exception, but although politicians have made a lot of noises here, unless Europe kills off its carbon markets, fossil fuels will always operate at an increasing disadvantage.

That is an upward trend, and no-one will spend on upstream oil and gas, because there will not be time to get the money repaid on debt used. As oil assets become less clear, debt agencies will nullify the oil and gas advantage to borrow cash. Goodbye upstream spend.

The IEA says that the energy crisis promises to be a historic turning point towards a cleaner and more secure energy system – but in the same way that gas was a tight market before the Russian war, the cost of gas was always going to rise, and that was always going to lead to more renewables investment. All of this was predictable and was going to happen with or without a war.

The entire IEA report only mentions the Border Adjustment Mechanism three times in the entire 524 page report, but this is key to bringing 3rd world countries into line, which want to export to Europe initially, later to the USA and then to China. This is the mechanism which forces the slower, less industrialized economies, which currently are doing the least to go renewable, to do so, in order to build any kind of export businesses.

In essence trust all of the currently verifiable real time data in this IEA report and trust none of its forecasts, then you can’t go wrong.