Prominent technology YouTuber Paul’s Hardware has kept a video diary of his first year with a Tesla Powerwall and SolarCity rooftop array, which illustrates that despite the advances in the technology available, the hardest work remains in orchestrating teams of workers to make multiple visits to the homes to complete the installation. For rooftop solar and HEMS to become mainstream, the installation team is the biggest hurdle to clear.

The video series documents the multiple teams of contractors that were needed to complete the project, involving electricians, roofers, and the Tesla installers themselves. A lot of time was spent waiting on the utility, SCE, to approve the work and allow the array to connect to the grid as an exporter.

The eight-month installation process involved a lot of back-and-forth, a couple of setbacks, but does seem to have resulted in a happy customer. What seems clear is that the technology problem is now solved – the components work out of the box, they are understood and the technicians find them easy enough to work with.

However, as much of the B-roll footage illustrates, the process still requires a team of workers to visit the home, tear up old installations, remove and replace circuit breakers and connection panels, rewire, re-patch, and finally test. In this case, all this had to be done under the blazing California sun, and while the crew handled it admirably, it is far from an easy job.

This complexity and effort remain the biggest barrier to adoption. This is expensive and labor-intensive work, and something that requires the collaboration of multiple trades. It is not an upgrade that can be sent to the consumer and simply plugged into the wall, and so, scaling up the installation network is going to be arduous.

Paul’s memory was jogged by recalling that he had not had a power bill that month, prompting him to check the online account, to find that he was owed $48 for energy contributed to the grid. As a professional YouTube personality, this led to a one-year recap, which he notes, is not very different from the previous six-month recap.

However, there are now a full year’s worth of figures to dissect. In terms of the customer journey, Paul placed a $500 deposit in September 2017, and worked commenced in April 2018, where the rather old electrical panel for the home had to be replaced, as well as have some other electrical work done to the house to bring it up to modern building code requirements in California. This is going to be a common problem among homes that want new power systems, and something that the installers have to plan for and accommodate. In this case, it required a new 200A main panel, with a 100A sub-panel for the battery backup circuitry.

A week after the electrical work, the solar panels were meant to be installed, but this was when the installation team carried out a roof inspection, they determined that the roof was too old, and that Tesla/SolarCity has a policy of not installing over roofs that might need work done to them.

This issue was apparently missed in the earlier installation process, and as a gesture of good will, Tesla offered to pay for the repair work to the roof area under the panel array, with Paul paying the rest. The roof was replaced on May 2nd 2018, and then on May 11th, the solar array was installed – along with the 14 KWh Powerwall 2, which has the integrated inverter. The utility permission to operate the array was issued two weeks later, and after a holiday, Paul activated the 18-panel 5.85 KW array on June 12th.

The Powerwall has a ten-year warranty, as does the solar inverter, while the rooftop panels have a 12-year workmanship guarantee, and a guarantee that they will still produce 80% of their capacity after 25-years. The installation workmanship as a whole has a 20-year guarantee. The system, Tesla says, should have a useful life of 35-years.

As for usage, Paul admits that having the new system didn’t really change their usage habits – a married couple with a newborn. The usage data paints a pretty comprehensive period, and Paul has three years’ worth of it. In 2016, before the installation, the July power bill was $238.78. This year, it was just $11.81.

As for the full-year performance and return on investment, Paul’s data suggests an average monthly electricity bill of $4.56, with average monthly savings of $147.47, equating to him recouping his costs in 13 years. The price paid for the system was $32,426, but Paul took advantage of a $9,728 tax credit, meaning that he is working from the final cost of $22,698.

For Paul, that’s an acceptable resolution, as he was expecting a 15-year ROI. The six-month recap (currently 1.39mn views) contains a better timeline narrative of the whole process than the one-year recap, should that tickle your fancy. In closing, Paul notes that Tesla has now nagged him to clean his panels, which is something he says he has been lax in doing.

However, Paul might be something of an edge-case. He paid for the installation upfront, including the cost of the roofing work, and if the cost of financing this was considered, the ROI could be considerably longer. As well, one has to consider what return he might have enjoyed by investing that upfront money into a savings scheme, if you are only considering this from a monetary perspective. However, if the 35-year estimate for the system’s useful life is true, and if the equipment doesn’t crap-out immediately after the warranties expire, this calculation would have to be rebalanced. 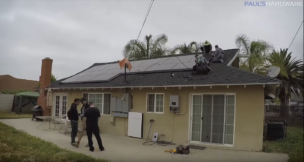