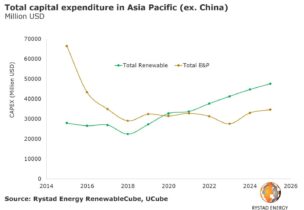 A key tipping point is always money, and Norwegian research firm Rystad Energy, put out a report this week suggesting that across Asia (not including China), more money will soon be going into renewables than was used to create oil and gas pipeline projects – in other words exploration and production (E&P) spend. The two graph lines are supposed to cross in 2020, it says.

It has measured Capex against E&P spend and says that in 2020, with heavy contributions from Australia, India, Vietnam, Taiwan and South Korea, it will stretch ahead of the search for fossil fuels. Capex for renewables will rise above $30 billion in the region by 2020.

This will be a major plank in chasing money out of fossil fuels too. For years climate change campaigners have tried to get banks to stop lending money to fossil fuel businesses, but there is no substitute for the fact that fossil fuel investment is no longer quite so certain of being repaid with such a handsome profit margin.

Gero Farruggio, Head of Renewables at Rystad Energy said, “These countries each have strong pipelines for renewable energy developments of all types, including offshore wind. And, importantly, most have large targets outlining the inclusion of renewable power sources within their respective energy mixes, with corresponding support policies.”

In Australia, the renewable energy project pipeline is now over double the national electricity market. Only 1% of the country’s solar, wind and utility storage projects is currently owned by an oil major, a detail that Rystad believes is likely to change. We’re not so sure after the most recent election in Australia, which re-elected a government which tends to be coal “friendly,” and which wants to preserve coal jobs.

“By 2020 it is feasible that the oil majors will be the dominant renewable developers in Australia as they pursue ‘oil and gas’ scale opportunities. Commercial drivers are increasing the desire to ride the solar-coaster,” Farruggio said.

As for India, we have already seen renewable auctions fall short of their targets, mostly due to aggressive government pricing, and end up having to remarket the auction.

Farruggio believes that upstream companies will build sizeable utility storage, solar and eventually offshore wind portfolios. Well they should and we have heard that before, but once oil companies own renewables assets, they tend to bail out of them early, because they are not as intrinsically profitable as oil. It is worth noting that Rystad is a generic energy forecaster, and does not live solely in the renewables sector, which is what makes them worry about who and what major oil producers will support.

Australia currently has a development pipeline of something like 105 GW of solar, wind and storage projects, and an aging fleet of coal-fired power stations which urgently need to be replaced by something – hopefully not more coal power stations.

Rystad deals with China separately and it is the world’s biggest investor into renewables but at the same time one of the leading spenders in upstream oil and gas.