November numbers show shift from PHEVs to BEVs in the UK

We constructed the graph below after the November figures for car sales came out from the Society of Motor Manufacturers and Traders (SMMT) in the UK, showing a sharp uptick in plug-in vehicles, when measured in percentage terms, to 28% of total passenger car sales. 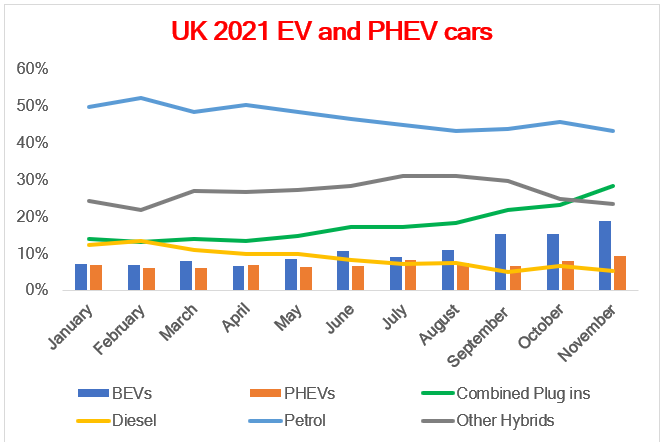 This is slightly less impressive when you use absolute numbers, because the 28% of sales in November that were electric vehicles was achieved in a month when total car sales were just 115,706, but the trend line from June onwards is that Battery Electric Vehicles (BEVs) are rising dramatically, as consumers show less interest in plug-in hybrids and it is this that drives the green combined line. September for instance involved 215,000 plus car sales, and the BEV absolute numbers were 32,721 and the PHEVs some 13,884. These were 21,716 and 10,796 in November, actually lower in absolute numbers, but a significantly higher percentage of total sales.

Still this latest set of numbers takes the year to date figure up to 17.5% of all cars sold being plug-ins, up from 15% by the end of October, against last year’s 10.7%. If this maintains through December that will mean a 7.5% increase in the percentage that were acquired being plug-ins over last year. And it will mean that our forecast for the year of 248,000 has already been exceeded, since the year to date figure at end of November is 269,212, more than 20,000 ahead.

Given that Rethink Energy has the most aggressive of all global EV forecasts, that means that this remains a conservative view with especially European targets likely to be exceeded. We have forecast that by 2040 that at least one billion electric vehicles will be on the world’s roads.

Part of the reason for the overall shape of the UK industry is the antipathy shown towards diesel sales in the UK, where there are no major UK owned makers of diesel cars and the government now taxes them highly (road tax) in the light of Dieselgate revelations, so the UK market may be slightly higher on EV sales because of this.

The SMMT has constantly complained that the ratio of vehicle charge points to plug-in cars has deteriorated since 2020 falling from 11 plug-in vehicles sharing one public charge points, to one charger for every 16 plug-ins.

Above: Rethink Research forecast numbers for the UK. The ink is barely dry on this forecast and the real numbers are already slipping ahead of the forecast. Most markets in Europe are increasing by 7.5% per annum, so the UK now looks to have caught up.

US utilities gang up to push 100,000 fast chargers by 2030
FuelPositive’s green ammonia will cut fertilizer costs by 40%