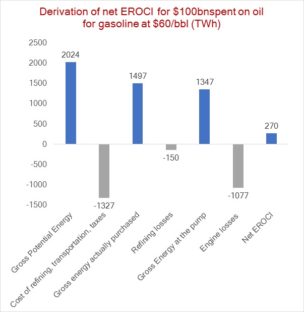 It is fairly easy for us on Rethink Energy to say that electricity will replace the petroleum part of the $75 trillion oil business, and that will lead to a massive reduction in the demand for oil by around 2035.

But when it is said by someone who is supposed to be valuing oil businesses, and who has the job title of Global head of Sustainability Research at BNP Paribas Asset Management, then it carries considerably more clout.

Mark Lewis is that man and has just written a paper that echoes the thoughts of all of us in renewables – Lewis has been around energy for a while, he was Head of Research at the Carbon Tracker Initiative, and head of European Utilities Research at Barclays and has been an economist for all of his working life.

The key thrust of his argument is that oil will be forced to between $10 and $20 a barrel in order to compete with electric energy or any other replacement. We think the position is far worse than that, but let’s stick with Lewis’ appraisal first.

It comes down to one simple calculation, how low will oil prices have to go in order to compete with solar and wind electricity, which is stored in batteries, pushed onto the grid and which also requires the addition of a national charging network in each country? And the $10 to $20 per barrel is the answer.

Of course he is assuming that petroleum cars are still legal. We know that new ones will not be legal anywhere of Europe, and that without new European sales, the cost of building traditional combustion engines, which are relatively efficient will have to be borne by, more or less, just the US. That will make them more expensive than they are today. But meanwhile Chinese built EVs will be exported all over the world, driving down costs and sharing that R&D cost across a massive footprint. As we said it is worse than he considers.

But Lewis’ point is well made. He did his calculation simply by saying how much driving does this amount of petrol or money get you and then compared like with like.

He took the gross potential energy that a $100bn outlay on oil could buy and compared it to wind and solar projects on the other. He then did calculations  about the cost of getting the power from where it is made to where it is used, and in some cases that meant building new transmission capabilities and he asked what other costs does it have, like refining. He took into account the costs and the energy losses incurred in the conversion of crude oil into gasoline and the same for getting electricity to the charging points.

This gives him cost of energy at the point of use. And then he cancelled out energy losses once it gets inside the vehicle and guess what, losses for gasoline and diesel engines are far higher than for batteries. He calls the final measure Energy Return on Capital Invested or (EROCI). This translates almost directly to the number of vehicle miles travelled for a set cost.

He calculates that $100 billion gets you 270 TWh of useful energy going the fossil fuel rout, and 1,881 TWh going the EV route using offshore wind, and 1,673 TWh using onshore wind, and finally 1,667 using solar. He then recalculates it for different oil prices, where the refining costs remains the same. The two price points only come close for offshore wind when oil reaches $9 a barrel, and at $10 a barrel for the other two. The reason he gives oil the benefit of the doubt with a range from $10 to $20 is because diesel seems to be able to match these at around $17 a barrel.

This is all well and good right now, because he is making a case for selling stock in oil companies, but are people really going to sell today and then go back into those same businesses at their new lower stock prices once they are selling oil at $9 or $10 a barrel? Well no, because this fuel will be driving cars that are about to be finally banned in most of the civilized world, so there is more downside, and all the EVs will have been made recently, while the combustion engines will be up to 15 years old. In order to eliminate combustion engines  by 2050, you have to stop new cars using this technology being made some 15 years earlier in 2035 and that’s the time line for most of Europe banning their sale.

The only upside that exists is in all the other products that you can get out of raw oil – and two of them, nylon and plastic, are not exactly flavor of the month right now. But the top ten are Gas, LPG, Gasoline, Jet Fuel, Diesel, Fuel oils, Bitumen and Sulphur – pretty much all fuels that give off CO2.

Lewis raises the question about how does an oil business run at that price. It currently has to find about 10% of its output in exploration every year and take a Final Investment Decision (FID) to exploit one or more of these each year, and yet its return at those prices are going to be very hard to find.

These FIDs will become tougher to justify every years at that $20 a barrel pricing approaches. An oil company can then only continue in business if it spends less money on exploration, perhaps.

This is not quite like IT and silicon chips – where one chip which is complex may power a base station, which may in turn cost $75 to make, the equipment may cost $20,000, but it might carry communications which are valued at $20 million. While a very similar chip may run a set top box, in a device costing $200, and deliver the economic benefit of $30 a month service subscription. Of course everyone wants to make the chips that make the most money, but only the smartest can succeed and the rest stick to what they are good at.

The cost of owning the fabrication plants is only low if you make many, many chips. So the sector is stratified. So the price of a WiFi chip does NOT affect the price of a cellular base station chip.

Energy is more connected even than semiconductors are or even food, and you cannot retain existing value at a point in time when one segment is undermining the cost of producing energy – as solar and wind are.

Lewis then makes the point that gasoline demand for cars and other larger vehicles accounts for 24% of global oil. Add diesel and you have another 3% and creation of electricity which uses up another 9% of oil demand. In fact  in total some 40% of global oil demand is accounted for by uses that will not make any economic sense once wind and solar reach sufficient global scale and cost-competitive batteries accelerate the penetration rate of EVs.

Wait, it’s worse than that. He goes on “Moreover, our analysis of the economics today does not capture the likely continuing and dramatic cost

reductions in wind and solar and EV batteries over the next decade, meaning that the same analysis in a few years’ time will likely bring the oil-price range required to be competitive into single figures.”

But when will this all be in the price?  Lewis expects, that “As in our previous forecasts, we expect price parity between EVs and internal combustion

vehicles by the mid-2020s in most segments, though the first segment crosses by 2022 and there is a wide variation between geographies and vehicle segments. And EVs will have cost parity with conventional light vehicles by 2024.”

Throw in aviation and marine oil uses and presume they are going to zero emissions too, and we see little in the way of any kind of redemption for oil.

So naturally Lewis realizes that the oil companies are in a race against time to change where their revenues come from. And week after week we see them continuing to focus on areas which give of CO2, instead of fully embracing renewables. The assumption is that oil companies are so big and powerful they can buy all the utilities and all the renewable energy providers, with their share price any time they want. But NOT once this idea begins to eat away at their share price.

But the biggest issues will be totally economically stranded assets. Any oil projects on which the FIDs are taken today and for which production starts

five to ten years down the line, and this will mean that some portion of each barrel might only be competitive at a price below their full cost of production, making oil without profits overnight.

We have already seen that one response (to coal) is to focus on what is locally produced – India and China want to get more of THEIR coal out of the ground so they do not have stranded assets. The same behavior will occur around oil, who will try to get all the oil out of their reserves now, while it still has a value, and that will accelerate the availability of cheap oil and drive down prices faster. In other words oil may need to go to $9 a barrel to compete, but in trying to get there it may end up below $5.