Polysilicon expands outside China, prices to rise throughout 2022

REC Silicon has committed to resume production at its Moses Lake polysilicon factory in the US state of Washington, with first production to be seen in Q4 2023, and full commissioning in 2024. This represents the revival of the company’s polysilicon capacity – it has 2,000 tons in Butte, Montana, with the Moses Lake facility having the bulk of 18,000 tons, enough to manufacture 6 GW of solar modules annually if run at an unrealistic 100% utilisation rate.

South Korean company Hanwha Solutions is the backer enabling REC Silicon’s restoration, having invested $200 million in the company. Hanwha’s solar panel division Q Cells announced a 1.4 GW, $170 million expansion to its 1.7 GW factory in the US state of Georgia last month, alongside $150 million for a 900 MW expansion to an existing 4.5 GW in South Korea. All told the company is to reach 10.9 GW cell and 13.8 GW module capacity. The company promised a “domestic US solar supply chain” in March with billions of investments involved – if there’s long-term incentives to help fund further facilities. But that appears to have died on the vine at the Biden Administration’s end.

Hanwha Solutions has been considering buying Woongjin Energy, South Korea’s sole ingot and wafer manufacturer. In previous years polysilicon maker Hanwha Chemical bought into Woongjin Energy, only to sell its holdings a year later in 2018 and quit polysilicon entirely in 2020.

Meanwhile the largest surviving non-Chinese polysilicon manufacturer, Wacker – still the fourth largest in the world by output last year – has announced it is considering expansion of its production capacity of silicon metal by 50%, with a new furnace at its facility in Holla, Norway. A feasibility study is underway.

Wacker’s production capacity of polysilicon, for photovoltaic semiconductors, is 84,000 tons – enough to make 28 GW of modules at 100% utilisation. However, this expansion announcement is for silicon metal in general, and it is unclear what subcategory of silicon product the raw material feedstock is destined for – there’s metallurgical silicon, organic silicon, polysilicon or electronic-grade silicon.

Wacker is working to reduce its emissions – it has a PPA with Statkraft for 40% of Holla’s power needs to be met by hydropower, it is researching the replacement of coal used in the silicon metal reduction process with “renewable” charcoal or pellets, and it is researching future production of renewable methanol from CO2 and green hydrogen.

Prices throughout the solar supply chain reached an all-time peak in Q4 2021 but dropped significantly in January, and have resumed a constant upward trend for seventeen weeks in a row since. With China’s National Energy Administration estimating that of the 121 GW of PV projects under construction in the country, 108 GW will be grid-connected this year, it has become inevitable that high demand will push prices higher throughout 2022. The polysilicon shortage, and other demand-driven supply chain bottlenecks, are far from over, with a new price record likely reached this coming November. 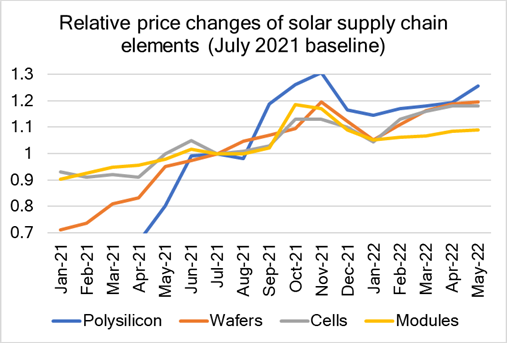 We still expect the shortage to begin easing in the latter half of 2023, thanks to the monumental expansions underway in China. Rethink Energy modelling predicts that the combination of limited supply and increased module cost will keep global installations down at 208 GW in 2022, just as they kept installations down at 164 GW in 2021. Come 2023 these factors will impose a “limit” of 288 GW, higher than demand – which we estimate will be 248.5 GW.

So while the current high prices are surely spurring thoughts of reshoring the polysilicon supply, they will only last six more months at a very high level, then will constantly decline, possibly going back below $10 per kilogram already by 2026. If a factory is only being considered now in mid-2022, it will not be selling polysilicon until 2025, by which time the current very high shipping costs should also have declined. As such any major non-Chinese polysilicon expansions that do transpire will be relying on policy decisions, such as sanctions justified by the human rights allegations levelled against Xinjiang factories, or protectionist moves such as the expansion of US anti-dumping rules threatened by the Department of Commerce.

China will inevitably continue to dominate the solar supply chain, having previously outcompeted Western producers throughout the 2010s, resulting in some 275,000 of capacity being taken offline. Over three million tons of capacity expansions have been announced by Chinese companies, and we expect over two million tons to have been built by the end of 2025, up from global capacity of 621,000 tons in 2021.

South Asia is the big potential region where a significant amount of non-Chinese polysilicon manufacturing capacity may be built – numbered in hundreds of thousands of tons, not the West’s tens of thousands or China’s millions. There’s India, with its plans for a domestic vertical supply chain, and there’s the whole Indochina region, which has been the favoured destination for production, dodging the US anti-China tariffs.

India’s ambitions to fully supply its own solar panels will not be realised – most likely it will produce the majority of its own modules, while its cells will be sourced from China still. Developing the even further upstream supply chain elements will be harder yet, but we now have some idea of how much the new solar manufacturing subsidies will go to polysilicon.

India’s latest Production Linked Incentive round (PLI) for solar manufacturing, $2.5 billion in total, assigns $1.55 billion to fully vertically integrated polysilicon-wafer-cell-module manufacturing, $580 million to wafer-cell-module, and $450 million to cell-module manufacturing. Given that polysilicon is around 40% of the investment capital cost of the supply chain, it should receive $600 million from that first tranche. That amount of money is enough to build just 300,000 to 400,000 tons of polysilicon production capacity, if you are a well-established company that knows what it is doing, and since it’s a subsidy it should be able to leverage even more private investment – the question is whether India can deliver, and whether the private players believe they will be protected sufficiently from Chinese polysilicon imports, or subsidised enough per ton of product.

As for the Indochina region – it has already attracted many downstream factories with its subsidies, and the region is compatible with both Chinese companies and Western finance, so as long as it can provide cheap electricity, polysilicon is a logical next step. South Korea’s OCI is to increase its Malaysian production capacity at least from 30,000 to 35,000 tons and has been considering a larger expansion of up to a further 40,000. At the start of this year Indonesia stated plans for a $4 billion, 200,000-ton investment in the industry, with the first 40,000-ton facility supposedly promised for Q3 – it must mean beginning of construction rather than commissioning. Either way, by then we will get an impression of what, if anything, the government’s promise meant.