Regulatory obstacles combined with unexpectedly rapid solar development have left the Netherlands’ power grid congested. New Dutch solar installations more than doubled from 1.7 GW in 2018 to 3.7 in 2020, but fell to 3.3 GW in 2021, even as overall European installations increased by 20% that year. On both a national and local level the grid’s limitations are set to be substantively addressed with new infrastructure only in a timeframe of between four and seven years. 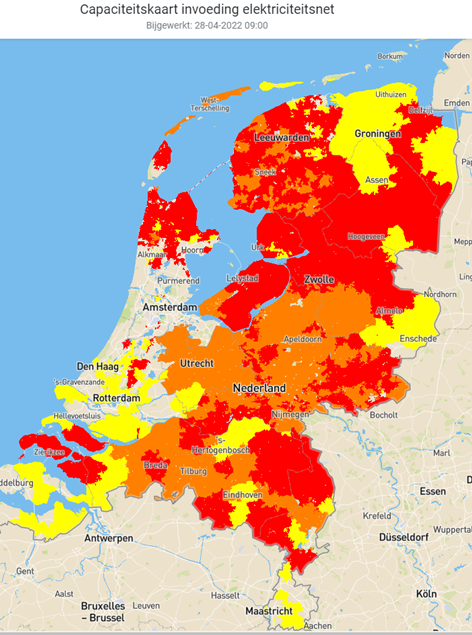 This first map from Netbeheer Nederland, the association of grid operators, shows the obstruction faced by new prospective capacity additions, while the second map shows that even new offtake requests are facing obstacles.

Transmission System Operator (TSO) TenneT and grid manager Enexis have begun an investigation into a “market mechanism to enable more intensive use of existing infrastructure” which may amount to auction-based incentives for generators to curtail their output, a solution discussed already in 2021.

Besides moves to further subdivide the grid to increase the number of connections to the 380-kV network from the 150-kV network, TenneT will have to rely more on redispatch, lowering generation in neighboring areas when there is an excess of solar power, and outright curtailment.

In 2020, regulations were brought in to allow swifter grid connection of solar projects if they consented to only be connected to the tune of 70% of their rated capacity, and TenneT was allowed by regulator ACM to make regular use of a power grid segment typically reserved for contingencies.

On the plus side, there will be greater battery adoption to ease grid constraints, and the sanctions on Russian exports have seen the energy sector become more of a priority for the government, with more aggressive investments in the energy transition to be expected in upcoming months. 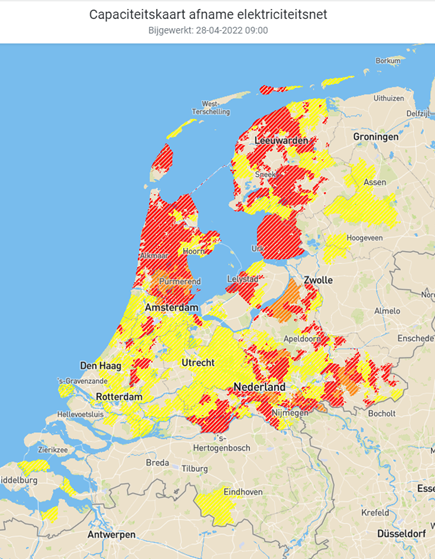 New tranches of investment to handle renewable development have been announced frequently for several years now, but they have been continually outpaced by the wind and solar industry’s requirements. That may be starting to change: in April one grid operator, Liander, which handles transmission for 3.2 million inhabitants, announced a $3.7 billion investment in the grid, with almost all of it dedicated to tackling bottlenecks, involving 6,500 kilometers of new lines and 56 new substations. Meanwhile TenneT, whose holdings are split between the Netherlands and Germany, has announced it will increase its annual investment to over $6 billion by 2025.

According to comments made in November by Hans-Peter Oskam, policy and energy transition director at Netbeheer Nederland, it can take ten years to adapt a node in the Netherlands’ high-voltage grid – two years for the physical work and eight for permitting and legal procedures!

At the time two of the most congested areas were Stadskanaal, with 758 MW seeking connection with room for only 115 MW, and Waalwijk, with 346 MW crowding into 147 MW. Those are two small towns in relatively less urbanized areas, and four other highly congested areas at the time were Utrecht, Friesland, Flevoland and Gelderland – of which the latter three are also relatively rural, meaning that it’s utility-scale solar which is being most affected.

While Oskam also mentioned a shortage of technical personnel, he clearly laid most blame on the regulatory environment. When working with a congested grid it’s better if supply is built near demand, but under the current regimen grid operators are legally obliged to process applications in the order they are received without consideration for social or strategic priorities. Oskam would like to see this changed, along with subsidies being used to steer the location of developments.

As Oskam observed, if current delays persist then 2030 targets cannot be met, his organization petitioned the state – but at the time coalition talks were still ongoing after the 2021 election. The Netherlands got a new government in January after nine long months of coalition talks, putting Mark Rutte in charge of a centre-right coalition for the fourth time in a row, with spending on renewables as one of its main policy goals.

Grid constraints are most stark in the countryside, but cities are also affected. Amsterdam was reported to have reached maximum capacity in two areas in June, with grid manager Liander instructing a port company that it could not expand a distribution center until capacity had been increased, and subsequently telling project developer Republica that it would face grid constraints until 2025. As of October, the major city of Utrecht’s Breukelen-Kortrijk substation was facing contracted capacity of 700 MW, but only able to handle 500 MW. TenneT announced it would build “smart transformers” at another substation to more flexibly handle variable renewable energy, with $189 million to be invested in the city’s grid by 2030.

On a broader, national scale, TenneT’s vision for greater connections between the 150-kV and 380-kV networks is to be built in phases from 2026 to 2029, so the time for that initiative isn’t the full, disastrous ten years feared by Oskam, but still varies from five to seven years for upgrades whose necessity is already felt. In the Raalte municipality, authorities are in talks with TenneT and Enexis to squeeze out the last drops of spare capacity for commercial installations – residential remains unaffected – and to expedite grid expansions which are again scheduled for completion by 2029.

Energieonderzoek Centrum Nederland research published in 2017 predicted that the Netherlands would reach 6 GW of total solar capacity in 2020, then 20 GW in 2035. Instead the country reached 11 GW in 2020, then 14 GW in 2021 – by far the biggest solar market in Europe per capita and nearly rivalling Spain and Germany even in absolute terms, despite the Netherlands having only 17 million citizens. So the ultimate blame for the grid constraints that will increasingly hamper this market can be assigned to a failure to predict just how dramatically solar purchases would leap to life in a country that didn’t participate at all in the 2008-2012 solar boom which Germany led.

We at Rethink Energy foresee 58 GW of solar in the Netherlands come 2035, and 79 GW come 2050, not much more per capita than Germany or Italy. The country will be a hydrogen hub, but its electrolyzers will rely far more on North Sea wind than on solar. So even our forecast, which is not the most aggressive out there for Dutch solar, is vastly ahead of what the grid operators were planning for five years ago.

This first map from Netbeheer Nederland, the association of grid operators, shows the obstruction faced by new prospective capacity additions, while the second map shows that even new offtake requests are facing obstacles.