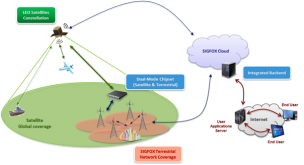 Sigfox’s low power, wide area radio technology has a growing footprint round the world, via smart city and IoT partnerships with companies like the UK’s Arqiva and Securitas in Spain. Now the French firm’s technology could reach into space, as it joins its most ambitious alliance yet, Project Mustang, a three-year effort to build a hybrid satellite/terrestrial IoT (internet of things) network.

The all-French group also contains aerospace firm Airbus, research institute CEA-Leti and engineering business Sysmeca. The idea is to use Sigfox as the terrestrial data link, with satellite backhaul and connections to planes and boats provided by a low-earth orbit (LEO) satellite constellation.

In its existing systems, Sigfox uses off-the-shelf equipment in its base stations to keep deployment costs down. Operating in the sub-GHz ISM bands, the network supports low bandwidth, long range communications between devices and the Sigfox cloud services.

The satellite link could be added to either the end devices or the base station, so that if a device was unable to connect to the terrestrial Sigfox network, it could fall back to the satellite.

While the power requirements for this would be prohibitive for ultra-low power, battery-operated devices, for those with a wired power supply and critical availability requirements (such as smart meters, alarms, oil tankers and rigs) the redundancy would be an asset. These devices may transmit small amounts of data but when they do need to communicate, the signal must be assured.

The Sigfox base station could be fitted with a satellite uplink as a primary uplink as well as a redundancy measure in some scenarios where terrestrial network reach cannot be achieved. With a three-year lifecycle, Mustang’s participants are looking to create a seamless global network, and note that the planned dual-mode terrestrial/satellite terminal will enable switching between the two channels in response to resource availability.

The group says that the development of this terminal modem chipset is a priority, with later optimization of the communication protocols being the next step before an application demonstration using an airplane.

The project adds that the full potential of the IoT can only be achieved by offering affordable mobile communications at a global scale and reach. Key to this is adapting existing networks, according to the group, which explains why Sigfox has been chosen – given that the company stresses the affordability of its system.

It also helps that the network architecture lends itself to this sort of adaption, as the network is focused on backhauling the messages it receives to a central cloud – which then sorts through and de-duplicates the messages. The base stations are deployed in a collaborative method, which means that each tower is not aware of the location of other nearby Sigfox towers. This allows for straightforward capacity upgrades, as a new base station is installed in a busy area and begins backhauling whatever it hears – whether it’s over fixed lines or satellite.

MNOs labor under 5G complexity, tough choices with many partners