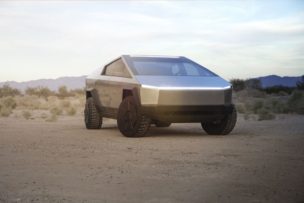 You will undoubtedly have seen it by now, but in case you missed the event, Tesla unveiled its new Cybertruck electric pickup, accidentally smashed its windows, and still managed to exceed 200k preorders. Posting a video of the bizarre vehicle hauling a Ford F-150 around seems to have drawn Ford’s ire, and the two companies are enjoying a fairly light-hearted PR battle.

However, it won’t take long for the competition to turn really quite nasty, as automakers realize that EVs are here and ready to upend conventional thinking. The Cybertruck has a stupid name and looks like a poorly cropped Delorean, but it is cheap and targeting one of the most lucrative segments in the US passenger car market – the pickup.

The cynical reading is that the smashed window was an orchestrated stunt, and that the refundable $100 deposit for the truck was a way to be able to claim surging popularity for the Cybertruck – passing 250k reservations within a week. Tesla’s previous deposits have been around $1,000 and were completely non-refundable, leading many to suggest that they were actually just ways for Tesla to secure a cash injection. The 275k $1,000 deposits Tesla snagged for its Model 3 were an order of magnitude larger, after all.

On that basis, it was similarly savvy to pick on the company that Tesla CEO Elon Musk had praised just the week before, when Ford unveiled its Mustang Mach-E. Ford is likely pleased as punch that the Cybertruck’s garish looks arrived and detracted from the battering that the Mach-E’s styling was taking too. Porsche seems to have been quite quiet, since the promo video showing the truck beating a 911 in a race was shown.

So, the frenemies will look to outmaneuver each other in the coming quarters. Ford’s $500mn investment in Rivian, a startup that has shown off its own electric pickup design. Rumors broke this week that Ford’s Lincoln division would be using Rivian’s EV chassis and drivetrain to develop an electric SUV, which would make it the first Ford vehicle based on that Rivian platform. Ford has also committed to using VW’s Modular Electric Drive Matrix (MEB) platform in its designs, to launch EVs in Europe.

The Reuters rumors claim that this Lincoln will appear in 2022, and have a 400-mile range and a four-motor configuration – with one motor driving each wheel. The US and China will apparently be the main markets. Lincoln is also apparently developing a smaller EV without using any Rivian technology.

Rivian is still publicly committed to launching its own R1S SUV and the R1T pickup, meaning that it will be competing with the Lincoln that uses its drivetrain. Available for preorder, the R1T claims 400-mile range, a 3-second 0-60mph time, up to 750bhp, an 11,000-lb towing capacity, and the ability to drive through 3-feet of water – a trait that EVs can exploit due to the lack of an exhaust and air-intake system. A refundable $1k deposit gets you on the list, with Rivian saying production will start in H2 2020.

But Rivian might find itself somewhat distracted, given the gigantic order for electric vans that Amazon placed back in September. Announced as part of Amazon’s Climate Pledge, Amazon is looking to purchase 10,000 of these delivery vehicles in 2022, and 100,000 by 2030.

But, it is still a very much unproven startup, and no matter how ambitious it is, there are going to be major teething problems that need to be stamped out. Tesla was founded in 2003 and only released the Model S in 2012. The Model 3, the mass market version, was introduced in 2017, some 14 years after the company was founded. Rivian was founded in 2009, and has raised $1.8bn in funding to date. Amazon pitched in $700mn back in February, with Ford chipping in another $500mn in April, and Cox Automotive adding $250mn in September.

Returning to Tesla; the Cybertruck makes some impressive boasts, with the price starting at $40k for a 250-mile range, with two more tiers providing 300-miles and 500-miles. The cheapest version uses a single motor rear-wheel-drive (RWD) configuration, and claims a 7,500 lbs towing capability and 6.5 seconds 0-60mph time.

If you want to fill the truck up, it will apparently house six adults (three in the front, three in the back) and can manage 3,500 lbs in the flatbed. The high walls surrounding the bed are concerning, but if you are worried about damaging the truck while loading, its body is made of a ‘ultra-hard 30x cold-rolled stainless steel,’ and was subject to a demonstration beating with a sledgehammer.

However, there was no mention of crumple-zones or pedestrian safety features, so it is unclear how the truck is going to fare in an accident. Tesla’s strategy there might be to rely on its somewhat controversial Autopilot feature to avoid these accidents, but such a rigid design sounds somewhat unsafe.

But this is far from the finished design. It lacks the appropriate lights and mirrors to make it comply with most transport regulatory bodies, and what little glimpse of the interior the audience got seemed to show that it was quite rough around the edges.