The EU struck a late deal to ban Russian oil imports, aiming to cut off a huge source of financing for the country’s invasion of Ukraine. It includes an immediate ban on the imports of sea-bourn oil, which accounts for two-thirds of Russian oil flowing into Europe. Following objection from Hungary, there will be a temporary exemption for oil delivered by pipeline, allowing Slovakia, the Czech Republic, and Hungary, extra time to wean themselves off Russian crude supplies. In addition to the pledges from Germany and Poland to stop oil imports via the northern part of the Druzhba pipeline, the ban will cover 90% of Russian imports by the end of the year. Russia currently provides 27% of the EU’s imported oil. Despite a reduction in sales through its invasion, it has seen revenues double to nearly €100 billion over the past three months, benefiting from soaring oil and gas prices. Following the announcement, the ban, the price of Brent Crude oil, an international benchmark, rose by 1% to $120.50 per barrel.

China plans to have one-third of its grid powered by renewables from 2025, according to a new “five-year plan” for the sector, up from 28.8% today. Renewables energy project will account for more than half of new energy consumption growth through the period, although leeway has been left for more fossil fuel-fired power plants to be built to improve energy security.

Renewable energy project accounted for 97% of new utility-scale power generation installed in the USA over the first quarter of the year. Of the 5.91 GW new capacity, 17 wind projects – worth 4.11 GW – were brought online, led by the 999 MW Traverse development in Oklahoma. An additional 76 PV projects also entered service, totaling 1.63 GW, while three small hydro projects totaling 5 MW came online. Natural gas was the only other source of new power, with 14 units totaling 154 MW.

Denmark and the Netherlands have become the latest countries to refuse Russian demands for Russian natural gas to be paid for in robules. In response, Gazprom, Russia’s largest gas exporter, has said that it will cut off supply. Both markets claim to have already arranged alternative supply agreements that will mean households and industry will remain unaffected. The countries now join Finland, Poland and Bulgaria in having their gas supplies turned off by Russia – accounting for 16% of previously contracted deliveries.

EDF Energy will not keep Hinckley Point B – one of the UK’s six remaining nuclear power plants – open beyond the middle of the year. Coming as a blow to the UK government, which is looking to boost domestic supply ahead of a potentially Russian-energy-free winter, EDF said that “Although it is technically feasible to extend operations at Hinkley Point B for up to six months, the time required to do this and to be confident we would be ready for winter operating has now run out.”

Climate ministers in the G7 have agreed to deliver “predominantly decarbonized” electricity grids in their respective nations by 2035, taking “concrete and timely steps” to eliminate unabated coal power in the timeframe. At the three-day meeting in Berlin, it was also notable that Japan, for the first time, promised to end subsidies for overseas fossil fuel projects. All G7 countries have now made this pledge, with a deadline set for the end of 2022. The wording of the agreement leaves a lot to be desired, but it could shift about $33 billion per year from fossil fuels to clean energy sources.

The age of climate anarchism has reached the Louvre. On Sunday, a man – disguised as an old lady in a wheelchair – tried to smash the glass protecting the Mona Lisa, before smearing cream across its surface in an apparent climate-related publicity stunt. As government action on climate change remains sluggish, and as rifts between ideologies continue to widen in Western politics, these sorts of events will become more common. It rings similar, if slightly more whacky, to the ‘Tyre Extinguishers’ that have started a movement of letting down the tires on SUVs. 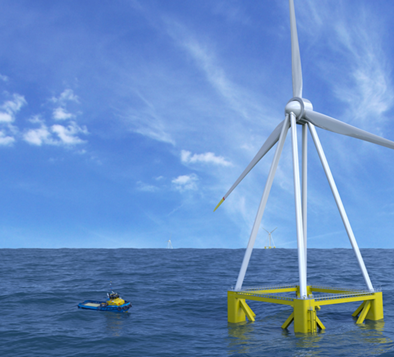 Acciona Energy has acquired a 24% stake in Eolink, a French company that produces a four-armed floating wind foundation. The company is hoping to accelerate the commercialization of its first 5 MW unit, with the first pre-commercial unit expected to be installed at the SEM-REV test site, off the coast from Le Croisic (France), in 2023.

California’s droughts could half the output from its hydropower generation systems this summer, according to new analysis from the EIA. The technology normally provides 15% of the state’s electricity, but with nearly half of the region set to be classified under ‘exceptional drought,’ the figure could fall as low as 8%. The dip in clean generation will bump up California’s natural-gas fired generation, with a 6% increase in carbon dioxide emissions from the state’s energy sector, and an average 5% increase in wholesale electricity prices.

The Massachusetts Supreme Court has ruled that Exxon cannot stop a suit filed by Attorney General Maura Healey from going to trial. This is the case where the state of Massachusetts claims Exxon lied about climate change and covered up the fossil fuel industry’s role in making things worse. Exxon pushed the idea that the suit was politically motivated and prevented the company exercising its free speech. The decision clears the way for the state’s case to proceed to trial in state court.

Researchers at IIASA have come up with a new energy storage idea, which to be honest is pretty lazy – it says that high rise buildings can retrofit the attachment of heavy weights and turbines to turn the lifts into batteries – charging by lifting weight and leaving them there on the lift, and then discharging when energy is needed using components used in passenger car regenerative braking systems. It is a no-brainer that lifts should have this built in, but we cannot how this will come into widespread use.

Canadian Solar is rapidly turning into an energy storage company, not just a solar business. It has been actively developing utility-scale solar plus energy storage and stand-alone battery storage, to the point where its results showed it has a pipeline of 27.8 GWh of projects globally. See table below from its results.

Canadian Solar has already signed several storage tolling agreements with a variety of power purchasers, including community choice aggregators, investor-owned utilities, universities, and public utility districts. The Company has also signed development services agreements to retrofit operational solar projects with battery storage, many of which were previously developed by the company.

The Biden Administration said this week that it plans to cut the cost of building wind and solar energy projects on federal lands. The policy is the result of years and years of lobbying from developers. They will now fall to 50% of what they were previously and more staff will be available to process permits. The Department of the Interior wants to permit 25 GW of renewable energy on federal lands by 2025.

Ireland has approved a 700 MW HVDC submarine cable to Brittany, France. The Celtic Interconnector was submitted to regulators in July, and still requires approvals from other regulators in the UK and Ireland.

Work has begun on the $1.65 billion USD Project EnergyConnect transmission line from South Australia to New South Wales, at the NSW end, with work in South Australia having gotten underway already in February.

Qingdao Municipality, in China’s Shandong Province, is offering subsidies ranging from $60 per kW to $150 per kW for offshore floating solar projects, according to size.

Taiwan Cement Corporation (TCC) said at its results that cement revenues are falling and it will slowly turn itself into a clean tech business, focusing on energy storage and management of waste. In Q1 TCC saw cement revenue in Mainland China fall 7.8% even as cement prices rise. It now has to pay far more for coal, and wants to use its renewable subsidiaries to cut the cost of its operations. While Cement revenues fell 3% year-on-year, new subsidiaries in the energy segment such as NHΩA, E-One Moli, and TCC Energy Storage all contributed positively to its consolidated revenue. The chairman gave a speech which dedicated the company to more new energy businesses. Italy’s NHΩA ,now owned by TCC, had revenues more than double and it took orders of $200 million and has a pipeline of over 1GWh of projects in Australia, Mexico and California. And E-One Moli Energy is now established as a manufacturer of lithium-ion battery packs.