The economics of 5G networks dictate that most operators will have to engage in far higher degrees of asset sharing than they currently do, overcoming their hostility to non-ownership models to expand their use of neutral host infrastructure and even active RAN sharing.

One of the indicators of this trend is the high valuation of independent tower operators, which despite their own market pressures – MNO consolidation, the shift to new site types for base stations – are still well-liked by investors. Rising tenancy rates, driven by MNOs’ increasing willingness to offload their own infrastructure and use shared sites, are an important factor in keeping valuations high.

As an example, Africa-centric towerco Helios Towers closed its initial public offering (IPO) in London last week on $1.45bn. The George Soros-backed company raised $364m on its first day and the IPO closed on Friday as one of the largest Africa-focused IPOs of 2019.

Also this year, IHS Towers has raised $1.3bn via the debt market and Eaton Towers scored $1.85bn in a sale to American Tower.

Kash Pandya, CEO of Helios, told Bloomberg that the firm may use some of its new funds to add three more countries to its African footprint.

Such transactions are just one sign of the shift towards greater sharing, and for MNOs, this will be expanding to the RAN too. The latest report from Rethink Technology Research’s RAN service – ‘Sharing assets is  key to making the 5G RAN affordable’ – examines three ways in which MNOs are looking to make their 5G macro networks efficient and profitable, and to form a strong base for future expansion into newer topologies and markets.

For the study, 78 global MNOs were surveyed about the most important factors in making their physical RANs cost-effective in the short-to-medium term (years 1 to 6 of commercial 5G).

The three factors which were most cited in that survey were:

The second of these factors sees MNOs become increasingly willing to share passive infrastructure (towers, ducts, sometimes fiber) in order to reduce operating costs and improve their ability to access the best locations. Many operators have spun off their own towers into arm’s-length units or joint ventures with other MNOs, or have sold them entirely to the increasingly important group of pure-play towercos. The world’s largest towerco is a state-engineered joint venture between the three Chinese operators, China Tower; the second largest is a US-based global pure-play towerco, American Tower.

According to TowerXchange, operator-owned or pure-play towercos now control over two-thirds of the world’s 4.4m towers. This has a significant impact on the utilization of site assets and the efficiencies for operators. As the tower industry grows and the operators consolidate in many regions, the balance of power is swinging towards the MNOs – fewer, larger customers can negotiate more advantageous deals with their tower providers, and there is more competition. Although the large towercos are consolidating their portfolios, the need for densification, and larger numbers of street-level or roof-top sites is encouraging new entrants, including cities and enterprises which can offer their sites at lower rates than the tower operators.

More towers are being built to accommodate the rising number of RAN deployments, as set out in Figure 10. By our forecast, there will be 5.5m towers (excluding mini-macro sites – Figure 17) by 2022, a significant rise – but without the towercos and other sharing mechanisms, this number would have been about 7.8m, to support the same capacity and coverage levels. After 2023 we expect stabilization, or even a drop, in the number of towers as further consolidation sets in, and operators shift new deployment to alternative sites such as street furniture, with the availability of more compact and easily installable kit.

For more information about the report, and the RAN Service, please contact John Constant on [email protected], or download the executive summary at https://rethinkresearch.biz/report/sharing-assets-is-key-to-making-5g-ran-affordable/ 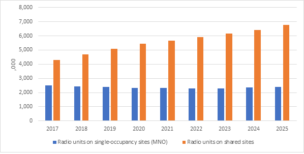