Utilities looking at 2050 air con and heat, are having nightmares

There have been many fatalistic claims that global warming will break the grid, as more and more people buy air conditioning – but few studies have seriously tried to put a value in TWh on the size of the problem

In this report from Rethink Energy, entitled “Warming and Cooling – double whammy for the grid” we have tried to put genuine figures which show that as more cooling is installed and home heat gets decarbonized, global utilities will need to lay on more than 1,500 TWh in fresh power resources – collectively about the same amount of electricity that India supplies to its 1 billion citizens. 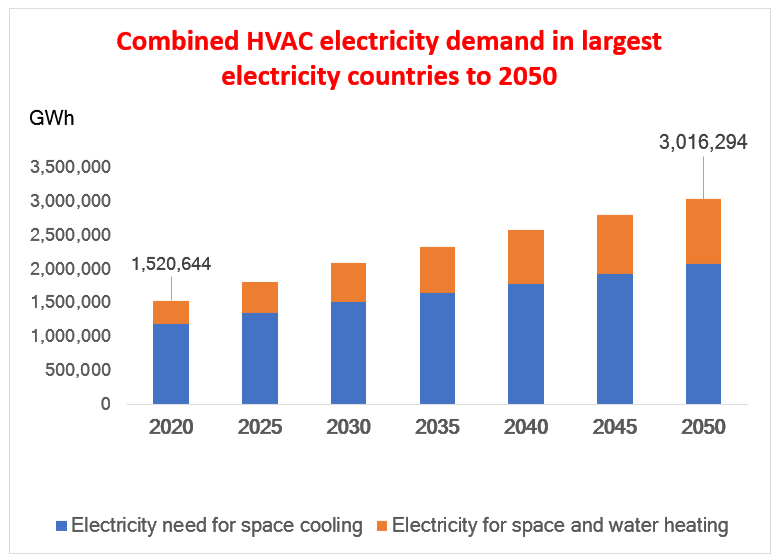 These are twin problems that must be solved in the same time frame – shifting home heating from the wood, coal and gas fossil fuels which they rely on today to renewables, at the same time as we accommodate soaring temperatures which immobilize workforces in the struggle for national competitiveness.

This report shows that the problems which assail the modern grid are not where you would expect. When we confine our search to the top 21 countries in terms of electricity output, we find that it is countries like the UK, Italy, South Korea and Japan which will be hit hardest, trying to convert their total reliance on natural gas into new resources that start as renewables and are delivered through the existing grid.

The world’s electricity supply is already expected to more than double from 24,000 TWh to 43,000 TWh per annum just keeping up with economic growth. When you add in a shift to electric vehicles and the mass decarbonization of industry this leaps to more than 50,000 TWh and many of these countries will also have to find a further 15% to decarbonize heating and keep up with air conditioning.

This report deals entirely with “affordable” electricity spending, keeping it within the limits of what individual homes will choose to spend, not spending that is funded by fantasy improvements in the economies of developing nations which may not come to pass.

Consumers in Egypt, Ghana, Kenya, Nigeria and Tanzania, are not the problem here – we agree wholeheartedly that these countries will face a massive problem with global warming – but these economies can only begin to address it through electricity once their economic wealth gives rise to stronger grids, with cheaper and more reliable power. These countries will pay the price of global warming, in the sweat and discomfort of their workforces, but because they are unlikely to be included in huge grid growth, we have not included them here.

While there are a few exceptions in Vietnam and parts of India, the assumption that the western Sahara and regions like it will suddenly develop an entirely new grid, with fresh generation resources in the next 30 years, and then choose to waste much of that resource on air conditioning, is clearly false and we have tried to keep this report grounded in what will actually, inevitably happen, and not delve into a fantasy long-term 2100 timeframe.

In climates which swing wildly from hot to cold, electricity customers will choose to spend similar amounts on cooling, as they do on heating. These amounts vary quite a lot based on how prosperous their economies are, how widely spread their middle classes are, what percentage of the country actually has electricity, and how extreme the temperatures are and whether or not electricity is subsidized, cheap as a percentage of household incomes.

While we anticipate that many countries already have a nascent requirement for cooling, we have only included countries where the average citizen can afford air conditioning systems and afford an extra slice of their monthly budgets for electricity.

As the planet warms, more and more countries will fall into that category of needing to spend on both heating at one point during the year and then spending on cooling during another.

This report tries to identify which countries have the biggest problems, where will people simply choose to suffer, or change their work habits rather than spend to avoid the effects of the elements; which countries have an obvious answer to the grid problem staring them in the face, and which simply see it as another intractable problem.

The report “Warming and Cooling – double whammy for the grid” forecasts the transition to 2050, attempts to put this problem into perspective for the 21 countries which represent about 84% of global electricity today, and shows which ones will be able to both decarbonize and keep their citizens comfortable. 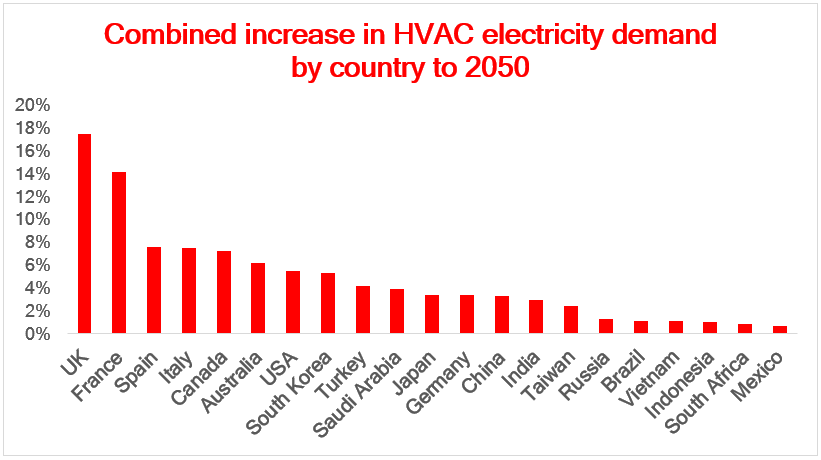 The world of renewables this week
Wind and Solar to provide 90% of US power by 2035, says DoE