When we started forecasting the LPWAN marketplace, it was clear that taking a use-case-driven approach was necessary, and one of the largest use cases across the board was the utility space. Over the past couple of years, Semtech has expanded its utility efforts, and this week, it has announced a metering deal with Seluxit in Germany – a county notable for its lack of enthusiasm for AMI.

The new deal will see Seluxit, a large German energy provider, use LoRaWAN in its MeDa meter project. Seluxit says that several hundred thousand of the planned 6.4mn meters have been deployed since November 2018. The initial focus seems to be on Behavioral Demand Response (BDR), showing customers their real-time usage so that they may take steps to making efficiency-focused changes to their homes or form better spending habits.

For utilities like Seluxit, the visualization should lead to customers taking steps to cut down on their usage, because the in-home display (IHD) will highlight the hourly costs of current consumption. Turning off lights in empty rooms, switching off appliances at the wall rather than leaving them on standby, or lowering the draw of HVAC systems, will all show up on the IHD. Combine this with other BDR techniques, like sending comparison reports to show how the home stacks up against neighbors, and the utility could see a significant reduction in its baseload requirements.

That reduction could allow it to avoid having to invest in building new power generation capacity, or avoid paying another provider to do so, as well as better integrate renewable sources of energy – all benefits that have been well documented.

The connected meters also provide a much closer to real-time picture of customer demand, on a per-home basis. This richer data is the first major step towards using DERs and battery storage as ways to iron out peaks in demand, as they allow the utilities to much more accurately model their needs. This means that major investment decisions can now be based on weekly or even daily usage patterns, rather than monthly or quarterly billing amounts.

As such, more and more utilities are embracing AMI, and although some countries have mandated it, many have still yet to do so. Yet, this hasn’t transpired in an industry standard approach, and there are myriad options for utilities looking to connect these meters to their networks.

In the U-LPWAN space, Wi-SUN and LoRaWAN have proven popular, while in the L-LPWAN sector, LTE Cat-NB has the lead. However, U-LPWAN approaches seem to have major cost advantages over L-LPWAN, especially if the network is built and operated by the utility. Similarly, if the MNOs have to compete at lower price points, their collective enthusiasm for that opportunity is going to dwindle. Sure, signing a national deal might get the juices flowing, but scrapping for a city here and there is going to get tiresome quick.

The Seluxit MeDa meter has an interesting quirk. It is using LoRaWAN for long-range communication, but also using the same Semtech radio chips for short-range FSK-modulated communication inside the home, presumably between the meter itself and the IHD. The pair say that this is to provide more detailed information to the users, and it should cut down on costs in the meters and IHDs, as you should be able to use just the one radio chip in both elements, rather than have to integrate something like WiFi, Bluetooth, Zigbee, or a proprietary WLAN implementation.

Seluxit is just the most recent deal announced by Semtech in the utility space. Back in July, its hardware was picked by Hangzhou Water Meter (HWM) dor deployment China, consisting of 80 gateway units and tens of thousands of meters. HWM has apparently deployed hundreds of thousands of LoRaWAN meters in China.

“Seluxit chose Semtech’s LoRa platform due to the number of significant advantages the platform provides for the smart metering vertical market,” said Daniel Lux, Co-Founder and CEO at Seluxit. “LoRa allows our customers to more closely monitor how they are consuming utilities in real-time. Shortly after installing one of our LoRa-based smart metering solutions, like the MeDa meter, customers typically get insight into their energy consumption pattern, which enables them to change appliances and/or habits and see a reduction in energy waste and total cost. As a global key supplier for the smart metering market, Seluxit is committed to providing solutions that reduce energy waste and create more sustainable energy grids worldwide.” 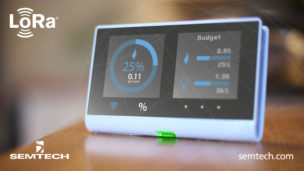