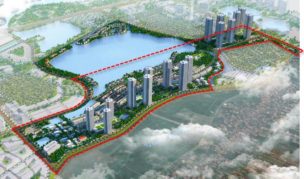 Vietnamese politicians have announced the start of a $4.2bn smart city project in Hanoi’s Dong Anh district, in partnership with Sumitomo and BRG Group. Japanese politicians were in attendance at the international relations gig, where the Sumitomo conglomerate broke bread with BRG – one of the largest hotel and golf resort developers in the country.

From a smart city perspective, it is important to note that this is not a $4.2bn contract for smart city technologies. No; a lot of new construction is going to be involved here, with the centerpiece being a 108-storey tower that is intended to serve as the heart of a new financial hub – not just for Vietnam, but hopefully for South East Asia. The footprint for the development is some 272 hectares (2.72 km2), which is really not all that big.

In terms of IoT applications for the whole of Hanoi, environmental sensing, weather monitoring, and disaster warnings are mentioned, as well as security systems for citizens. Smart building management and renewable energy are also going to be incorporated, alongside an environmentally friendly public transport system.

Now, all of that sounds quite achievable, but it is at this point that the announcement veers into the speculative end of the IoT. Facial recognition, unspecified blockchain technologies, and 5G are namedropped, but as we have seen in Western markets, they have been met with hostility by consumers. Of course, China is a massive advocate of the technology, and it will be interesting to see which tack Vietnam takes here – especially as China is Vietnam’s border.

There are five planned phases of construction, which should all be finished by 2028. The project has seen the Vietnamese and Japanese governments work quite closely together, and geopolitically, Japan is looking for a new best friend, following its continued falling out with South Korea. An emerging market like Vietnam is good to get in on the ground floor of, to this end, and Hanoi is not going to be the only smart city project between the two.

Nonetheless, the Nhat Tan-Noi Bai project will be the first, and in terms of opportunities for IoT vendors, there is huge scope here, especially if you can prove your worth in Hanoi and secure contracts for the other expansions. However, Viettel has made headway in LTE Cat-NB (NB-IoT), and has apparently installed 1,000 base stations in Ho Chi Minh city (perhaps better known as Saigon, located in the south of the country). We can’t find a number for Hanoi, the capital city, in the north, but both have populations of north of 8mn people.

So Hanoi is soon going to (hopefully) start throwing its hat into the ring of mature smart cities, and one that has the backing of a Japanese megacorp. Sumitomo casts a pretty wide net, spanning energy, mining and raw materials, chemicals, transportation, energy, and of course construction. Following large losses in shale oil in 2014, Sumitomo shifted its focus to infrastructure, automotive, and its non-resources businesses – and operates 3 industrial parks in Vietnam, housing over 190 companies, most of which are Japanese.

This 50:50 joint venture with BRG will be expected to provide a nice return. With 7,000 homes set to be created, from a pure real-estate perspective, this should be quite lucrative – just 20 minutes from central Hanoi. The first of the five phases will be the residential areas, with commercial space added in the second, before a new metro line is added to link it to the airport. It’s not actually clear what the other phases consist of.

Chairman of BRG Group, Madame Nguyen Thi Nga said “BRG Group had spent a lot of time, effort and enthusiasm for the Nhat Tan – Noi Bai urban planning project, as we considered this as a project of great importance to Hanoi and the whole country. The construction of a modern smart urban area on both sides of the Nhat Tan – Noi Bai route, known as the gateway of the world to Hanoi, shows not only our strategic vision in the strong development of the capital, but also expresses our ‘dare to think, dare to do’ thinking, not to mention that we have spent a lot on fulfilling our task of leaving a new hallmark on the beloved capital city.”