Wi-SUN shows off chops in City of London lighting win 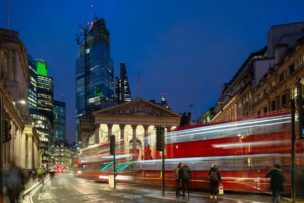 A night-time tour of the historic City of London, drawn up to show off its new connected lighting system, was not something we could easily say no to, and so Riot travelled to the Big Smoke to learn how the ‘Corporation’ settled on and implemented the Wi-SUN network that powers the 12,000-unit deployment.

The City of London is something of an oddity. Occupying a little over a square-mile of the capital, the area is London’s primary central business district, and the heart of the financial and legal professions. It is run by the City of London (CoL) Corporation, which governs the Square Mile itself – an area that houses many of the most famous London landmarks, including St Paul’s Cathedral. The CoL is not one of the 32 London boroughs, rather it is the smallest county in the UK. To outsiders, it’s easy to trip up when people are talking about the ‘city’ of London and ‘the City.’

With that out of the way, the CoL has a number of challenges to manage, most prominent is the imbalance between daytime and nighttime populations. There are only around 9,400 permanent residents in the City, with the working population thought to be around 450k. Throw in the tourist population, and on some days, the City might host a million people.

Giles Radford, Head of Highway Construction & Infrastructure at CoL, explained that the City needed to be able to light its historic attractions using the same technologies as it would use on its regular streets. It needed to be able to balance the public safety needs of the City with the mood and atmospheric lighting requirements to provide the right tourist and passerby experience.

When the CoL began this journey, Radford said that it didn’t know a thing about Wi-SUN, but that it had around 45 different types of lantern, all of which were aging, and could only be controlled in an on-off fashion, using the old Cyclo system. They were also all on unmetered power supplies, which Radford said required a lot of worker effort to rationalize, when it came to billing. The UK’s Carbon Tax and rising energy prices proved to be quite a driver behind the adoption of LED lights and a Central Management System (CMS).

The lighting fleet was a blend of around 1,300 illuminated road signs, 9,500 streetlights, and around 1,600 special purpose lights, such as the mood lighting and uplighters used for the historic attractions. In the tender process, Urban Control, an IoT-focused systems integrator targeting smart cities, was the clear winner, showing off its capabilities in pilots that tested the wireless mesh network in the worst conditions that the City had to offer – later partnering with Itron for the full deployment.

The Square Mile is a complex blend of medieval streets, full of twists and turns, dark nooks and gloomy alleys, all of which need to be lit. It also houses some very tall buildings, full of steel and glass, making the RF environment quite inhospitable. This is where the repeating mesh network came in, with the messages sent by the Urban Control boxes being able to flood through the network to reach their intended destinations, hopping from node to node.

Radford believes that the current CoL network is running at around 10% to 15% capacity, managing the lighting application, which gives the CoL plenty of room to add new functions, as part of its smart city ambitions. Traffic monitoring, air quality sensing, waste management, and noise monitoring are all being explored, and Radford said that the Wi-SUN infrastructure is an excellent foundation.

The CoL Police are also able to turn up the lights in areas they are responding too, via an integration in their control center, as part of the public safety focus. Wayfinding applications are also being explored, which could guide people through the City using the lights as navigational points.

Currently, the main and side roads in the City have been completed, and the alleyways and footpaths will be finished by March 2020. The upgrade project began around two years ago, and the new LED fixtures are thought to be exceeding the 60% energy reduction target that the CoL initially set.

But being able to control the lights in a dynamic fashion is the most pressing objective. While the LEDs themselves can provide around a 50% energy saving, the CMS systems are able to add an additional 20% to 30% saving on top, through being able to dim the lights when they are not needed. In addition, lights can be brightened if there is an event or requirement, and the color temperature can also be adjusted to better set the mood.

This is what the tour set out to demonstrate. The journalists braved the rain, moving from the Guildhall, taking a lap around St Paul’s, before heading to the Rising Sun for a few drinks. On the way, the tour stopped to see how the CMS could be used to brighten and dim specific lights, and as far as live demonstrations typically fare, this one was successful. The LEDs can become legitimately blinding in the gloom, and even at a 10% load, are bright enough to safely illuminate most streets.

Phil Beecher, President and CEO of the Wi-SUN Alliance, provided some background for the event. He noted that the alliance had enjoyed a 60% membership growth in the past year, and pointed to a Navigant report that said there were 95mn Wi-SUN-ready devices deployed to date.

Brian McGuigan also spoke at the event, in his role as Director of Smart Cities EMEA, at Itron. McGuigan joined Itron by way of the Silver Spring Networks acquisition, and updated the audience, saying that Itron had deployed over 200mn communications customers for over 8,000 customers in over 100 countries.

Itron is a major contributor at the Wi-SUN Alliance, but it does use other wireless protocols in its smart grid deployments. In the smart city market, Itron’s primary choice is Wi-SUN, but there is more variety in the industrial side of things. McGuigan noted that Wi-SUN is proven, with an extensive ecosystem, and was designed around backwards compatibility and a market accustomed to 20-year contracts.

McGuigan then showed off a view of Copenhagen, a now-Itron project that was started some seven years ago, showing how even in cities, the mesh network was capable of multi-kilometer hops. A view of San Francisco showed how around 5mn devices connected to each other in an area about the size of Scotland, in Wi-SUN’s self-healing and self-forming manner.