Will EV charging have a streetcar conspiracy at hands of automakers? 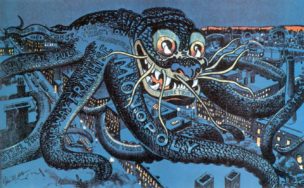 In the same week that Minnesota shut down an attempt by oil and manufacturing companies to reverse the approval for Xcel Energy’s $25mn EV pilot program, Massachusetts has rejected National Grid’s Phase II EV charger rollout, amid claims that oil firms have been sowing disinformation. Joining the dots, it seems likely that EV chargers are going to fall victim to automaker-based schemes to besmirch and derail them – and there’s historical precedent here.

The General Motors streetcar conspiracy makes for some fantastic reading, where GM and others were suspected of supporting buses so that the US’ burgeoning system of trams and streetcars would be killed off. This would ensure that buses and cars would remain the primary mode of transport, protecting the road-going interests of the stakeholders. The less concrete elements of the conspiracy theories then posit that these bus companies have been run into the ground and intentionally degraded, to ensure that passenger cars became, and remain, the primary mode of transport in the US.

Riot does like to don its tin-foil hat on occasion, but thankfully, we don’t have to in this case. There’s actually quite a lot of evidence and cases that can be pointed to that show the lengths that the automakers would go to, to protect their profits. The big question you have to ask now is whether you think today’s automakers have changed – and we would immediately point you to Dieselgate, for the answer.

So, while GM, Mack Trucks, Firestone Tire, Standard Oil of California, and Phillips Petroleum were indicted in 1947 on counts of conspiring to acquire control transit companies in order to create a transportation monopoly, and conspiring to control the sales of supplies to companies owned by bus company National City Lines – a GM-controlled business, in which those other companies were also investors.

They were convicted of the control of supplies charge in 1949, but were acquitted of the monopoly charge, but the cases did not end the suspicion that skullduggery was underfoot. In the 1970s, the Urban Mass Transportation Act and the Ralph Nader Study Group Report on Land Use in California brought the conspiracy to the fore again, which then led to antitrust hearings in 1974.

Since then, the allegations and suspicions have dogged both GM and the automotive industry at large, and now in the wake of Dieselgate, there’s a fresh reminder of the lengths they will go to protect their profits – at the expense of both consumers and now the environment. Vox has a pretty balanced write-up that dives into more of the streetcar nuances, but now with the beginning of mass rollouts of EV charging networks, you can draw some interesting parallels.

The question of whether, in the current political climate and administration, automakers could get away with buying up these burgeoning EV charging network operators and providers, and then run them into the ground, is a big one. Given how readily the US bailed out the automakers in the 2008 crash, except Ford, it seems that the government is ready to go to bat for them.

So would that protectionism extend to leniency or support in court challenges? How many plants on local city council boards or state-level regulators have the automakers collectively got? Is any political system safe from the deep pockets of illicit bribery, or the clout of lobbyists working higher levels? How can you be sure that a political decision hasn’t been unduly influenced by this sort of interference? Will your tinfoil hat stand up to this level of head-scratching?

The argument against the decision was that the PUC didn’t have the authority to approve such pilots, that if utility ownership of EV charging stations is allowed then private ownership must necessarily be prohibited, that the pilot is not good public policy and a departure from precedent, and that the proposed accounting methods were unlawful.

The PUC said that some of these points deserve discussion, but that the petitioners can sling their hook – approving Xcel again and letting the utility crack on. “The PUC finds that the petition does not raise new issues, does not point to new and relevant evidence, does not expose errors or ambiguities in the July 17 Order,” it ruled.

Of course, the issue with regulated and sometimes publicly owned utilities is perhaps a uniquely American one, and one that is going to complicate many of the planned rollouts – as opponents can file similar claims to the appropriate regulator and tie progress up in legal proceedings.

In Massachusetts, the Department of Public Utilities (DPU) has rejected National Grid’s proposed $166.5mn Phase II EV charging network proposal, demanding that National Grid provide two years’ worth of analysis from its Phase I project. This means that National Grid can’t re-file the Phase II project, which included 17,700 Level 2 chargers and 300 of the new DC fast chargers, until 2021.

Now, asking for proper analysis is certainly fair, but you can see how this sets National Grid back. What’s more, such a delay hampers EV adoption in the state, even if the DPU has provided what looks like token concessions – allowing National Grid to add an off-peak EV charging rebate, a fleet advisory service plan, and co-locating fast chargers with solar and/or battery storage.

Speaking to Utility Dive, Samantha Houston from the Clean Vehicles program in the Union of Concerned Scientists said “the oil industry was in the mix, and it is important to note they have a broader strategic disinformation campaign. They are clearly threatened that EVs could undermine their market share.” Houston added that the American Petroleum Institute, one of the bodies that objected to the Phase II program, has been engaging in deceptive behavior, such as comparing National Grid’s plan to other utilities using “nonsensical metrics, and glossing over numerous factors about those cost metrics that render the comparisons meaningless.”

The DPU said “we are not persuaded that something less than a full approval of National Grid’s proposal will negatively impact these goals. As the company gains experience from its Phase I EV Program and the limited portion of the Phase EV II Program granted in this proceeding, National Grid may file future EV proposals under the umbrella of the grid modernization proceeding.”

So, will such challenges be a hurdle that EVs eventually clear, or will the market in the US be significantly damaged by these infrastructure challenges being tied up in regulatory approval challenges? Because of the public-owned nature of many US utilities, the regulators become a bat with which to bludgeon any utility that wants to rollout an EV charging program, using arguments that these are adding unnecessary expenses to customer bills.

Zebra says 61% of enterprises have IoT investments, but take a look around
LoRaWAN cements its head start in the Indian LPWAN race