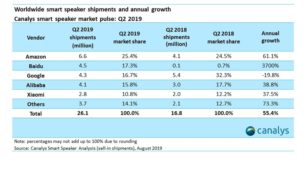 Quarterly figures claim that Amazon is still in the lead for smart speaker shipments, hitting 6.6mn units in the past three months, according to Canalys. Google has fallen from second place, as Baidu leapt ahead to 4.5mn units, edging out Google’s 4.3mn. However, reports from China suggest that actual usage of these speakers remains very low.

If accurate, this lack of interaction highlights the importance of the ecosystem to the experience. China’s total quarterly shipments reached 12.6mn, up by more than 100% in the quarter, and now more than double the 6.1mn units that were shipped in the US, which declined 2.4% in the quarter. Fourth place went to Alibaba, on 4.1mn units, up around 39% in a year from 3mn, with fifth place going to Xiaomi on 2.8mn units – up 37.5% in a year, from 2mn. The Others accounted for 3.7mn collectively, up 73.3% from a year ago.

Baidu has been successful due to its dominance in the smart screen segment, according to the report, with aggressive marketing campaigns. The screens accounted for 45% of its total product shipments, apparently, and it also faces little competition in the segment – allowing it to dominate the operator channel, says Canalys.

Google was dampened by the Nest rebranding effort, and while Amazon has launched a multitude of new form factors, the report believes that Google’s lack of iterations, updates or refreshes has contributed to the decline. Both Amazon and Google improved outside the US, however. For Amazon, over 50% of its shipments were non-US, up from 32% compared to Q2 2018, with Google’s numbers on 55% and 42% respectively.

Abacus, an outlet owned by the South China Morning Post, which is itself owned by Alibaba, dived into the usage rates for Chinese smart speakers. It notes that the US accounted for 25mn units in 2017, while China was around 3mn. As per the Canalys figures, this imbalance has been upended, but Abacus questions whether the Chinese units get the same level of usage as the Amazon and Google devices.

Speaking to Chinese consumers and trawling the Chinese web, it says that many are critical of these speakers’ capabilities, with most complaints centered around poor voice recognition and account-based music playback problems. It also stresses that these speakers are very cheap, and that consequently the high sales figures do not necessarily map to usage.

Abacus says that during Alibaba’s Singles’ Day event in 2017, the Tmall Genie speaker was discounted to $14 from $72. Xiaomi’s Mi AI Speaker Mini reached $14 too, and Baidu was selling a $12 unit last year too. Even Google’s cheapest device costs $20 when on sale, although we do get the feeling that Amazon isn’t far from bundling one of its devices with a Prime subscription.

However, Baidu is subsidizing these speakers, and is losing money on each unit sold. Its rivals will be doing the same, and Abacus points to Baidu’s Kun Jing, GM of the Smart Living Group, who said that the strategy isn’t to make money right now. Alibaba’s Lijuan Chen, head of the AI Labs wing, said that the price cuts are aimed at “educating the market,” to try and drive industry growth.

So then, it’s a straight volume-driven platform-play – get enough devices out there with enough users, and the developers will flock to the platform and make it even more valuable. However, Abacus notes that numerous hurdles still exist in China, such as consumers who prefer to speak local dialects and the markedly different consumer habits of the country.

Mengyue Wu, of Shanghai Jiaotong University’s SpeechLab, told the outlet that while Chinese language voice interaction technology is good enough, usage is limited because of dialects and lifestyle differences such as living spaces. Wu points to Chinese apartments being smaller, and that consumers do not interact with the smart speakers as control centers of their homes – because everything is closer to hand, and the effort is not so burdensome.

Mengzhu Long, speech interaction specialist AISpeech’s CMO, adds that content and services are still not well integrated with smart speakers in China, compared to the Western counterparts. Without features like radio, news, and ticketing being solid, users are not getting a compelling experience, Long stressed.

No amount of “educating the market” makes up for a rubbish first impression, and Apple’s Siri usage has lagged for years because of its early limitations – allowing Google and Amazon to surge ahead.