5G is struggling to prove its worth to consumers, and MNOs seem locked in a race to be the first in their markets to have comprehensive 5G networks, despite this lack of enthusiasm. However, it might not be value-confusion that proves to be the main barrier to 5G adoption, given the spike in website traffic related to the potential health dangers of the new wireless technology.

The same arguments that have been parroted for fluoride in toothpaste and vaccinations seem to be taking root in 5G. Similar complaints have been leveled at older cellular technologies, as well as WiFi, with cancer and headaches being the main complaints, and thanks to the prevalence of social media amplification, what were once very niche and conspiratorial viewpoints are now breaching the mainstream.

The problem that MNOs and the cellular community are going to face going forward are that these vocal minorities are largely anti-science and anti-authority. Flat earthers seem to increase in number in similar fashion to the number of space launches, and despite a wealth of scientific evidence, (which some have replicated to farcical effect) there’s no persuading them.

So then, talking about how the RF radiation involved in 5G and older variants isn’t going to persuade these types that they are not at risk of cancer. Entrenched misinformation seems near impossible to dislodge in these circumstances, and you do not have to look far for your own local example of a group protesting testing or installation of 5G technologies.

To this end, the FCC has effectively approved 5G as being safe, after being compelled to examine claims that radio emissions could be unsafe. To this end, new 5G devices can have the same radio inputs and outputs as existing LTE handsets, and don’t need to be reduced.

To save itself future headaches like this, the FCC is also proposing that it ends technology-specific rules, and instead treats all radio devices the same, when it comes to the radio emission limits. This would mean that when new 5G or 6G devices appear, the FCC won’t have to retest or reexamine them, as it could treat them as fundamentally the same as the 3G and 4G devices.

That might help to quiet the outrage when the FCC announces that it is simply complying with its own regulations. Not being a part of the news cycle means that the antivax and flat-earth types might miss it, and so won’t latch onto it as a supporting point in their really quite strange arguments. The FCC cites the FDA’s radiological wing, which said that “available scientific evidence to date does not support adverse health effects in humans due to exposures at or under the current limits.”

Nevertheless, expect mmWave deployments to produce controversy, because big numbers are a big concern for these types. Trying to explain attenuation and power emission is probably a futile endeavor, because the narrative will be that 28GHz is somehow worse than 5.8GHz. Trying to drill down any further into the logic is not going to get you anywhere.

The FCC’s public comment system already appears to be falling afoul of these mouthbreathers. As VentureBeat recounts, pseudo-scientists, conspiracy theorists, and Russian disinformation trolls are already active here, muddying the waters. The FCC, in theory, has to listen to all of these comments, and take them into account in its decision-making process. This is going to be rather burdensome and odious, but that process is there to ensure that any valid complaints do get their chance to be heard.

It’s not only an American problem. In the EU, the headquarters of the political alliance is subject to a temporary ban against 5G deployments, due to residents’ concerns in Brussels – which is not a good look, no matter how you slice it. Swisscom had to publish a 5G Fact Check, due to hostility in Switzerland. 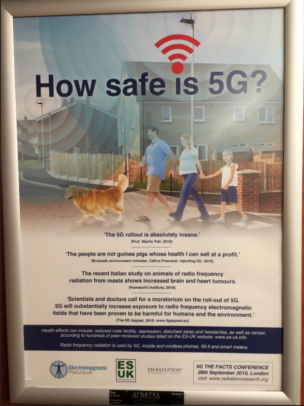