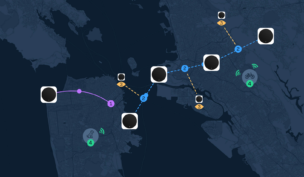 LPWAN botherer Helium has fired up its LongFi offering in 425 US cities, using ‘over 1,000’ of its ad-hoc hotspots to provide what could be a pretty compelling spanner in the works for LPWAN rivals. Its U-LPWAN proposition, powered by gateways sold to its customers, could mop up a tidy chunk of the market in urban environments, and it is something that many network providers need to worry about.

The business model is compelling. Customers that buy a $500 gateway are promised payouts in the form of the namesake Helium cryptocurrency, which is mined by the hotspots and denoted by the activity of the local network. Somewhat equivalent to a LoRa base station, or perhaps a WiFi access point on some pretty gnarly steroids, the Helium hotspot promises a way to claw back your investment, or perhaps even turn a profit, but for many who just want to ensure that their devices have network connectivity, a crypto payout is a very negligible concern.

Currently, some 45 of the 50 US states have coverage, and the total footprint area stands at 100,000 square-miles (258,999 square-kilometers), which sounds like a lot until you check the surface area of the USA and realize that this initial footprint is a little over 2.6% of the country.

Still, there are more devices where there are people, and 425 cities now have the potential to host Helium-powered ecosystems. Notably, the Helium website says that its initial Hotspot order is 99% sold, meaning that it is shortly going to have run out of stock.

However, earlier discussions from Helium talked about how an entire city could be covered with around 50 to 100 devices, meaning that the 425 cities claimed are somewhat misleading. Sure, 1,000 units would provide 20 to 10 completely covered cities, on the initial metric, which is rather a long way from the 425 mentioned in this update – something to keep in mind, especially as the city threshold was 150-200 back when we covered the launch of LongFi back in June.

In its announcement, Helium quotes Scott Kaplan, a Floridian entrepreneur who has installed 19 Hotspots and says that “Helium’s model provides a strong incentive for me to own multiple devices because I can provide coverage to a huge part of the densest areas of Miami and boost the utility of the network. The more useful the network, the more devices can use it, which increases the cryptocurrency rewards that I receive as a network owner.”

We’re interested to hear Kaplan’s take in a year or so, but for now, his example illustrates how a person or company that needs an IoT-focused network could help alleviate some of the upfront barriers. Of course, there are many in the LoRa camp that will be shouting at their screens that the likes of Kaplan could just as easily do this with LoRaWAN and a bit of know-how, but Helium has always stressed the convenience of its technology as a major selling point.

A few products have already made it to market, based on Helium. There’s CleanWater AI’s pollution monitor, InvisiLeash’s dog tracking collar, and a bike and scooter tracker used by Lime. Nestle is also using Helium in its ReadyRefresh replenishment service, Agulus is using Helium in an automated agricultural irrigation system, and Stay Alfred wants to use Helium as the basis of an in-building sensing system for up-scale travel apartments.

In terms of the current network, Helium lists 1,234 Hotspots, which is perhaps just too coincidental a number. In terms of international action, there’s a Hotspot near Portsmouth, UK, and one in Beijing, China. There are 4 in Hawaii, 2 in Alaska, and the rest are smattered across the US mainland. Unsurprisingly, California is most covered, but New England and Texas are not far off the pace.

As for the model, those that are running Hotspots will be earning a portion of the total Helium tokens, for forming the network. For anyone that wants to send messages on the network, they will need to purchase Data Credits using USD. Helium likens these to prepaid cellphone minutes. Helium tokens can be converted into Data Credits, meaning that those who have purchased Hotspots might eventually pay for the cost of the gateway via the cost of buying credits for all the messages sent.

In its pricing argument, Helium compares itself with AT&T, Verizon, and T-Mobile, but notably not a U-LPWAN alternative. It does stress that its approach avoids having to manage SIM cards and data caps, and says that you can pool data across as many devices as you like. Also prominent is the claimed range of over 10-miles, but again, it is comparing itself to Bluetooth and WiFi, and not any of its sub-GHz LPWAN competitors.

Nonetheless, we are quite interested in the success of Helium. The business model is intriguing, and thankfully, the buzzword-bingo that usually accompanies any startup with cryptocurrency tendencies is very muted. Combining blockchain with LPWAN definitely ticks a few boxes in terms of our curiosity, and if it were completely open source, we might not go a month without touching base.

However, there are still roadblocks ahead, chief of which might be the wider cryptocurrency market and its bumpy fortunes. As the LPWAN marketplace in the US is far from settled, Helium can carve itself a nice slice of the action, and it has other global markets to expand into, in time. The white paper is worth digging into, should this have taken your interest, the founders have relevant experience, and the investors include some familiar names.

Moixa plugs away, passes 10k batteries in 100 MWh Japanese fleet
5G is not driving a capex spike like 4G, but is producing opex headaches