Deployments of private enterprise wireless networks will surge over the next few years amid rising hype that has been stimulated by the course of the ongoing pandemic. However, the curve is steeper than looked likely, such that the rate of growth will peak within around five years before subsiding as saturation approaches.

These are some of the findings of Rethink Technology Research’s latest report from its RAN Service, entitled ‘Private Networks Driving Opportunities in 5G and WiFi’. 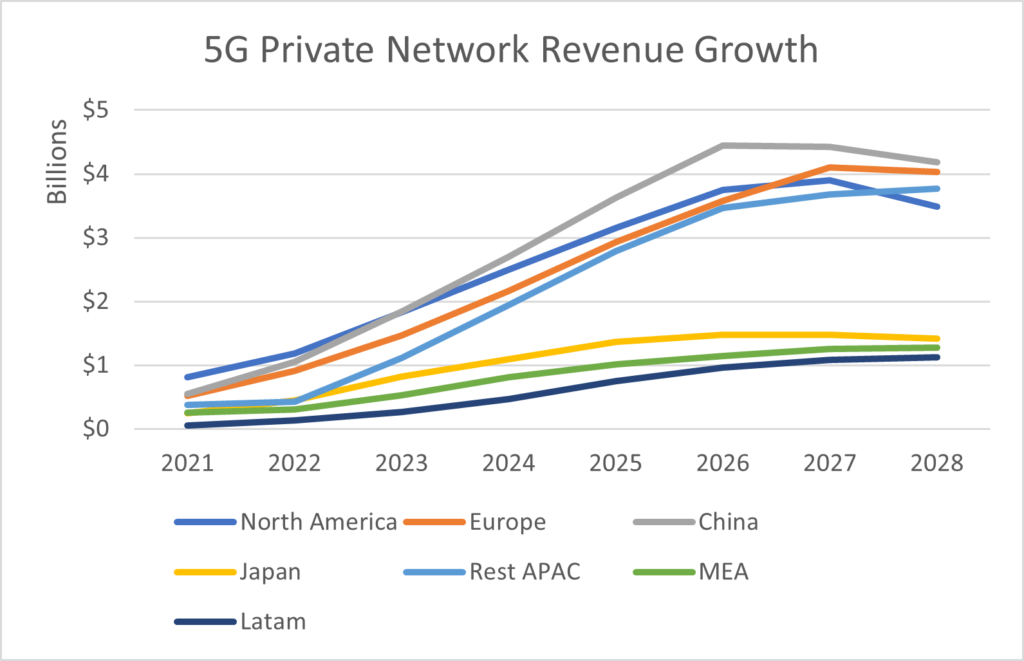 Taking 5G alone, annual network equipment sales are on course to peak in 2027 at $19.3bn in, before subsiding. There will be a similar, if smaller, boom in deployment of enterprise WiFi networks around the latest 6E standard, which will offer greater capacity and performance than the current generation, closer to that of 5G. However, that WiFi growth will be confined largely to North America and Europe, and will peak earlier in 2024, after which an increasing number of sites will swing to 5G for more demanding use cases.

The forecast is published by RAN Research, the wireless forecasting arm of Rethink, and drills down into regions and vertical industry sectors, identifying manufacturing as a major driver for private enterprise 5G in line with the Industry 4.0 revolution, but with strong growth across the board.

There will be growing demand for private 5G in all sectors, although with differences in timing, as well as by geography, all detailed in the report with analysis of factors involved. Healthcare, transportation, energy and government stand out as other sectors where deployments of private 5G and WiFi 6E will take off faster than the average.

Cumulative growth in private 5G will be spectacular, with 26.6m networks deployed around the world by 2028, up from 1.1m in 2021. This growth will occur in all regions but will be especially striking in four countries leading the private 5G field now – the USA, Germany, China and Japan. The report analyzes each of those countries separately, with China being the biggest market, but the other three accounting for more networks per head of population (about the same in each case).

Of these four, China stands out for facing stronger regulatory resistance to fully private, non-telco 5G, as roll-out is dominated by the three great state-owned monopolies, China Mobile, China Telecom and China Unicom. But strong upsurgence from the county’s enterprises, including government agencies as well as manufacturers, will open up the country’s enterprise 5G field to rapid growth.

While 5G will account for the lion’s share of the growth over the whole forecast period, there will still be a significant number of 4G private networks being deployed over the next few years. Similarly, on the WiFi front, the last generation (WiFi 5) is dominant at present but it will be the latest, WiFi 6E, that takes over during the forecast period and offers an alternative to 5G for some of the emerging use cases.

There will also be a significant revival of heterogenous networks (HetNets), combining the new generations of WiFi and cellular, as new AI-based techniques finally deliver the smooth handover that has proved elusive for so long. In fact, far from being antagonistic to WiFi, 3GPP has actively encouraged coexistence in its standards, embracing WiFi and other non-3GPP wireless access protocols. This recognizes that they will continue to coexist so they might as well be more openly integrated.

The 5G Non-3GPP Interworking Function enables much tighter integration between 5G and WiFi than existing overlay methods. That enables not just transparent switching but tighter coupling with common application of rules over mobility, security and QoS. Enterprises will much more easily be able to flip between whichever protocol delivers the best QoS at a given time, or meets other criteria such as cost and availability.

Yet while we believe this will enable much greater harmonization between 5G and WiFi, paradoxically this might hasten migration to cellular. This is because when users have equal access to both they will gravitate towards the one that offers the greatest convenience and best experience. In the past that has often been WiFi, not least because of data caps on cellular as well as lower speeds.

But with 5G the tables are turned, especially until WiFi 6E is widely available. Already, Ericsson has observed that consumers who had recently upgraded to 5G phones spent more time on applications requiring lower latency and higher performance, notably cloud gaming and augmented reality. The convenience of accessing these over 5G, as well as the higher performance, resulted in 20% decreased usage of WiFi on their phones, both at home and outside, after upgrading. The increase in use of cellular connectivity was at least equally great.

The report also examines opportunities for new players in private 5G, which in turn raise challenges for the big incumbent infrastructure vendors, as well as operators. We have already seen how some of the largest enterprises, especially in manufacturing and automotive, have been building private 5G networks bypassing operators. So far, traditional infrastructure vendors have fared better, often in partnership with the enterprises. It may be that operators in turn will have opportunities with smaller enterprises, in some cases with the help of start-ups targeting specific vertical industry sectors.

4G Deployments - The Backbone of 5G