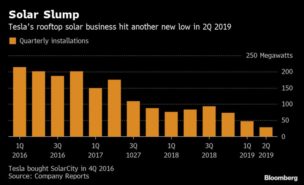 Tesla’s recent earnings report made no mention of the Solar Roof project, but just a week later, CEO Musk tweeted out that the company was “spooling up production line rapidly. Hoping to manufacture ~1,000 Solar Roofs a week by end of this year.” As Musk has a compliance agreement with the SEC in place, one could interpret this to mean that Tesla is going to hit this target.

However, most have met the announcement with extreme skepticism. Given that only 21 Solar Roofs had been installed in California by the end of April, and that Tesla has never discussed actual current production capacities, leaping to 1,000 units weekly in just 4 months or so seems very unlikely. Business Insider published a pretty damning exposé on the behind-the-scenes delays. a

After the $420 incident, the SEC imposed a requirement that Musk get his tweets signed off by Tesla’s legal team, in such a manner that anything he tweets about production targets or financials will be pre-approved. To this end, Musk has either flouted this requirement, and faces punishment, or Tesla’s counsel has signed off on this target.

As construction on the Gigafactory 2 in New York State still hasn’t been completed, it seems astute to reason that Tesla is going to have a hard time ramping production. The company did finally manage to meet the 5,000 weekly units target for the Model 3 EV, but doing so was turbulent, to say the least, and the battery cells produced in Gigafactory 1 were diverted to meet the Model 3 project at the expense of the Powerwall business.

A recent planning application for the Fremont automotive manufacturing plant shows that Tesla is building a test structure on which to rest its Solar Roof technologies. Given that Tesla is now on the third distinct iteration of the roofing system, the initial installations are being used to gauge how to finalize the product, but this somewhat implies that the design is still not yet final, which is going to add to the skepticism greeting the ramping claims.

The Gigafactory 2 in Buffalo garnered $750mn in incentives for Tesla, with the state mandating that the firm create 500 new jobs by April 2019, and then 1,460 by April 2020. Tesla has achieved the first, but there are concerns that the declining SolarCity business is going to make meeting the second target rather difficult.

Panasonic is a major partner in the project, fronting the capital expenses in exchange for a long-term purchasing agreement with Tesla, where Tesla will use the photovoltaic cells and modules produced in the plant in the Solar Roof. The pair don’t describe Gigafactory 2 as a joint venture, but it seems a little unfair to call it a solely Tesla operation.

In the 2018 report, Tesla said that there were 800 staff at Gigafactory 2, but that around half were Panasonic workers – the partner at the factory. In January, Tesla laid off 7% of its workforce, which left over 750 employees at the plant, it said to Greentech Media. For each year it misses the target, it faces a $41mn SEC fine, as was agreed in 2016.

The greater problem for Tesla might lie in finding customers for all this capacity. Back in August 2018, a Reuters report said there were 12 installed Solar Roofs in California, which means that based on the public reports from the three investor-owned utilities in April 2019, the figure now stands at that 21 – barely more than one installation a month in that time. However, the most recent quarterly update says that installations are taking place in eight states, expanding from just California, so there appears to have been some progress there.

The most recent price discussed in public was $21.85 per square foot of roof. In the shareholders meeting, Musk was hopeful that Tesla could provide the roofing system for a price comparable with a conventional shingle roof and the cost of the home’s utility bills, or perhaps even less than this. Some $42 per tile was the original price discussed at launch, with the supporting non-solar tiles costing $11 per tile. At the recommend blend of 35:65, this comes out to the $21.85 per square foot price, while a shingle tile alternative would cost you around $6 per, and a fancy slate tile would be more like $17 per.

So then, the energy savings need to be the driver for RoI, for most homeowners. To this end, Electrek’s examination of a roofing quote suggests that over the expected 30-year lifetime, the $65,466 that this home was expected to spend on energy would result in the roof only actually costing around $4,100. The first Solar Roof customer, Amanda Tobler, saw her bills fall from around $4,000 a year to just the bare-minimum grid connection fee of $120. She also earned a $40 credit for feeding energy into the grid, and this means that her Solar Roof should have paid for itself within 13 years.

But of course, it is not really fair to compare the Solar Roof system to a plain shingle tile roof, as conventional rooftop solar is well established. There are plenty of installers who can fit a solar array, and many who would also be able to pair it with a Powerwall. Tesla does perhaps risk alienating some of these installers by moving onto their turf, instead of just selling the well-liked Powerwall battery packs.

In conventional solar installations, Tesla has really let it slip since acquiring SolarCity in 2016 – then the largest provider. Now, Sunrun and Vivint has surpassed it, with Tesla in third-place, but not because they have grown – rather because Tesla’s 2018 installations are around a third of what they were in 2016.