Volta preps 150 ad-supported EV chargers, but is the model viable? 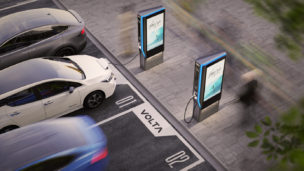 Volta Charging has announced that it will deploy 150 Direct Current (DC) EV chargers in the next year, suitable for any EV but supported via advertising. Using both the required smartphone app and the charging unit’s billboard-esque screen, the model requires advertiser buy-in and metrics for impressions are going to be tricky to come by.

Investors have confidence, however. Volta just finished an addition to its Series C round, bringing the total to $100mn – meaning that it’s on track for unicorn-status. Launched in 2010, Volta has secured funding from Schneider Electric, SK Innovation, and Energize Ventures.

The current approach, of Level 1 and Level 2 chargers, targets businesses and real estate firms, signing them up to let Volta install its chargers in high-traffic areas. These charging stations incorporate a large digital screen that acts as conventional advertising square-footage, while the smartphone application that lets EV drivers get access to the juice is another channel for marketing.

The first 30-minutes of electricity is free, but drivers can pay for longer sessions – with the half-hour of Level 2 enough for as much as 175-miles, in certain cars apparently. The new DC chargers could provide 350 miles per hour, and are going to be installed alongside the Level 2 units. Based on the current charging map, Volta has deployed 834 chargers.

In terms of the business model, Volta is an advertising business with a side-hustle of EV charging. The chargers are an additional element that can be grafted onto the digital billboards, in a way to increase dwell time and appease planning regulators that might object to a blaring LCD screen, blasting out adverts, but who can’t really say no to free EV chargers.

There’s growing pressure to rollout EV charging infrastructure, and with the growing environmentalism among the populace, the planning department that says no to EV chargers that are ostensibly free as a public service is going to be quite unpopular. To this end, slapping a charging point onto the billboard is a savvy move, and one that city councils might be misled by – or simply consider it as a means to an end.

Of course, if this helps EV adoption, then the advertising can be tolerated. The infrastructure has to be installed somehow, and while some businesses will have done the math and worked out that a charger increases dwell time and therefore the amount of money spent at the store, others might need an additional nudge.

Cities that are struggling with the EV penetration targets might have a hard time saying no to such chargers, as they don’t have to worry about becoming advertising businesses. In theory, Volta handles that side completely – meaning that, as far as the sales pitch goes, the city is in a win-win position. It has gained an EV charger and spent no money.

Volta says it has provided 45mn free vehicle miles to date, since its first stations were deployed in Hawaii. It now has installations in Los Angeles, San Francisco, and Silicon Valley, while outside of California, it has cropped up in Chicago IL, Phoenix AZ, and Dallas and Houston TX.

“As the electric vehicle industry continues to grow, Volta is well-positioned to build out an economically viable charging network needed to facilitate the shift from gas to electric,” Volta CEO and founder Scott Mercer said in a statement. “We continue to rapidly scale our business to meet the growing demands of drivers, real estate partners and sponsors. This capital injection will accelerate our mission of mainstreaming electric vehicles.”

As it’s a startup, Volta isn’t publishing financials, and we have no accurate way of knowing how much cash it is burning through. That Series C suggests that this is quite a capital-intensive process though, and the contracts that Volta will sign are also hidden from view.

Alleviating that capital burden would require getting the retail parks and city councils to pay for the equipment, which would move Volta into a different market – and one that is already quite well served by dedicated charging equipment providers. This would also turn partners into direct customers, with all the headaches that entails.

Instead, retaining ownership and control of the charging units lets Volta play in the advertising world, and so it should have quite a sophisticated model for how it values advertising impressions. Rethink’s experience in the digital advertising world means we are quite familiar with the problems facing video advertisers, especially when it comes to counting impressions and measuring their affect.

With these chargers, Volta has to be able to prove that adverts shown on the screens are affective, and given that it is mostly going to be relying on the kinds of measurement tools used by conventional billboard advertising, this seems decidedly low-tech. Adding some sort of sensing capability would make things easier here, but the uproar to being monitored in public spaces would be quite damaging.

Volta’s website makes the pitch that there are “no hardware purchases or monthly service fees and not a single charging fee for venues that meet the Volta data model. The entire process is turnkey, with costs covered by an innovative sponsorship model that allows forward-thinking brands to advertise across the network.”

That website also suggests that Volta is targeting premium brands and advertisers, looking to attract high-value shoppers with its digital enticements. To this end, these charging stations are going to first pop up in