Digitalsmiths survey calls for next gen TV and skinny bundles 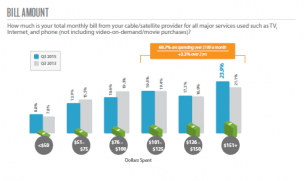 At the tail end of last week, the Q3 2015 Video Trends Report was released by Digitalsmiths, a TiVo company. The report tracks consumer behavior across a multitude of video services in the US, including pay TV, video on-demand, OTT, and connected devices, surveying 3,153 consumers over the age of 18.

According to the report, the majority of respondents were pay TV subscribers however, as more and more people cut the cord, Digitalsmiths sought to understand the audience that forgoes any pay TV service.

Of the respondents without pay TV, 19.3% had cut the cord within the last 12 months and just over 42% had cut the cord over one year ago. Interestingly, antenna TV is on the rise. Thirty-eight percent of respondents were cord-nevers, having never subscribed to pay TV service, but over 45% of respondents without pay TV reported using an antenna to receive basic channels, which is a nearly 12% increase from a year ago. and a surprising variation from the typical OTT route of cord-cutters or cord-nevers.

Consumers are not just canceling and switching services; they are making adjustments to their existing services as well, referred to as “cord-shaving.” In Q3 of 2015, slightly more consumers reported decreasing or removing services from their pay TV subscriptions as opposed to increasing or adding to their current service.

The most reductions in service came in the form of reducing the level of cable or satellite received and cuts to premium channels. However, DVR adds saw a 5.2% increase in one year. Combining this with the fact that nearly half of those planning to switch their service would consider staying with their current provider if new functions improved content discovery, it looks as though the video landscape is becoming more unforgiving as consumers are expecting more from their services.

Dissatisfaction has grown to 24% of respondents with pay TV, a 2.5% increase over the past two years. Consumers are looking for a next-generation TV experience more similar to OTT experiences. Pay TV subs are also unhappy about price increases. As of Q3, 60.7% of respondents are paying over $100 per month to their pay TV providers and nearly 24% are paying over $151 a month. Over 40% of respondents are paying more now for pay TV than they did one year ago, Digitalsmiths said. Some 68% of those not satisfied with their service, report increasing fees as the cause.

Skinny bundles are what the people want. Over 75% of respondents want to pay only for the channels they actually watch, according to the report.

Consumers on average would pay $40.50 to have between 17 and 18 channels of their own choosing, a la carte. Pay TV providers are working to offer those skinny bundles, but content owners continue to resist it.

Pay TV providers have compensated with TV Everywhere (TVE) offerings, but awareness is lacking – more are unaware of TVE options (43.3%) than those that are aware (43.1%). Nearly 24% of subscribers that know about their TVE options use them, an increase over the past two years, but use is sporadic at best with no discernible patterns emerging.

Meanwhile, TV networks are offering OTT options via TV apps, which have been adopted by almost 26% of respondents, the most viewed apps being HBO Go, ABC, CBS, WatchESPN and NBC.

Awareness of OTT offerings is growing. Sixty-three percent of respondents reported that they were aware of services such as Hulu and HBO Now, over a 5% increase since the second quarter.

“Cord cheating,” which refers to pay TV subs that also use OTT services, is now a widespread behavior, as 63.1% of respondents reported seeking video content and linear TV from third-party and OTT services. Just over 55% of cord cheaters and 56.3% of all respondents reported using OTT subscription services monthly, an increase from one year ago. Of the cord-cutters and cord-nevers, almost 75% reported using OTT subscription services monthly.

Of the OTT service adopters, 33.1% watch two or more hours of OTT content daily. Although more people still watch two or more hours of live TV each day. Time spent watching OTT means less eyeballs for live TV and OTT services are not experiencing declines in viewers or viewing. The most popular OTT services are Netflix, Amazon Prime and Hulu, all of which have experienced at least a 2% growth over the past year, but Netflix reigns supreme as 49% of respondents reported using the service, more than all of the other OTT services combined.

Consumers aren’t only spending more on pay TV this year, 25.2% of OTT adopters spent between $15 and $30 per month on subscription services, a 4.4% increase in one year. But what is the reason for all of the cord-cheating and why are consumers turning to OTT? Almost 57% of cord-cheaters reported the convenience of OTT services as the top reason to “cheat” but convenience is falling. Forty-nine percent reported that OTT is simply cheaper.

Mobile viewing is growing and people are viewing content away from home and away from the TV. Connected devices are ubiquitous and 52.5% of respondents reported owning tablets, and almost 70% own smartphones.

Thirty-eight percent of tablet owners watch video content on their devices, 91.1% of those watch on a weekly basis and 35.8% watch two to five plus hours of video on a tablet per week, says the report.