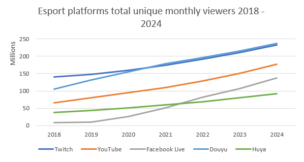 While pay TV still struggles to grasp the mettle of esports, live streaming of the genre continues to escalate, now accounting for over 10% of all sports viewing in the US, amounting to about 3.3 billion hours over 2019. That is assuming we call esports a sport, which may well be the case soon if the Olympic Games committee allows esports into its books as looks increasingly likely.

Unlike some other candidates such as darts and squash, at least esports can claim to have truly global reach with fast growing audiences in almost every region. Indeed, there are signs of saturation among core younger audiences and evidence that esports needs to reach out into new demographics and break through into mainstream TV.

There is the rub. Some operators and broadcasters tried to get into esports almost at the outset and gain early mover advantage, but such efforts have largely backfired or at least stalled. We may recall Sky, now owned by Comcast, and UK commercial broadcaster ITV, each taking a 16.5% stake in esports TV channel Ginx TV in September 2016, with the avowed aim of complementing online esports streaming with an approach more geared to entertainment and less to the geekier enthusiasts.

Yet, since then, Ginx TV has hardly proved a runaway success and the best defense of its record is that it was ahead of its time. Annual revenues are running at about $4 million, roughly what Sky and ITV together paid for their combined 33% stake. With esports failing to gain traction on mainstream TV up to that point at least, Ginx TV has refocused on a direct-to-consumer (D2C) offering in an attempt to revitalize its business.

Meanwhile, esports viewing has continued to grow strongly but almost exclusively on streaming markets in all key markets.

Outside China, Amazon’s Twitch is the dominant player, with Alphabet’s YouTube Gaming second. Facebook Live is gaining quite strongly in third but still on a low base, while Microsoft’s Mixer has come in at fourth place but failing to close the gap. In China, Douyu, already widely described as the Twitch of that country, followed by Huya, are the principal esports streaming platforms.

Over the next few years esports streaming will enjoy sustained healthy growth as total unique monthly viewership grows from 479 million in 2018 to 1.15 billion in 2024, according to the recent report Esports on verge of hypergrowth to $5bn plus gambling, Revenue Forecast to 2024, by our forecasting arm Rethink TV. Douyu and Twitch will be vying for first place as the Rethink TV graph shows, but largely in disjointed markets. Twitch is banned in China, although Douyu did launch internationally in 2019.

This leaves the question of whether mainstream TV will make an impact at last, with the answer being that it will but largely confined to streaming platforms. This is largely because now esports is starting to need TV rather than just the other way around, in order to continue gaining fans beyond its saturated base.

As the Rethink TV forecast makes clear, esports needs to attract a new constituency of viewers and fans who may, at least in the first instance, be attracted only to a more accessible version of events, geared as in that original Ginx TV prediction more towards mainstream entertainment.

An important point here is that esports has evolved as a more closely-knit community than many traditional sports, with greater interaction between fans and players. It can be viewed as a continuum, or pyramid, with the serious professional or semi-professional players at the top.

The next level comprises esports enthusiasts, some of whom will enter serious competitions but are essentially spectators who are somewhat addicted and prepared to contribute financially in various ways to teams and individuals, for example by donating voluntary gratuities or “tips”. Next come the casual viewers who enjoy the spectacles but are more passive and unlikely to contribute financially. Finally, is the potential audience among the wider public, including perhaps fans of conventional sports that have an eSports equivalent.

Esports is often likened to “real” professional sports and there are many parallels that emerge in the Rethink forecast, but one difference lies in greater fluidity between these audience categories. Casual esports viewers are more likely to progress to enthusiasts, who in turn are more prone to become active participants than in the case of “real” sports. At the same time as eSports continues its overall commercial expansion, attracting greater advertising, sponsorship and rights acquisition, average revenue per enthusiast or serious fan will increase.

The role of mainstream TV streaming therefore could be to play a role in that continuum, drawing in new casual viewers in the first instance, some of whom go on to become serious fans and even players. We anticipate that strategy having some success in expanding the fan base, reaching both different ethnic groups and also more females.

Another key point to note is that notwithstanding the ambitions to become a coherent Olympic sport, esports is really a collection of distinct games or events related largely by their mode of viewing and the demographics they attract. Esports as a category is more like field ball sports, with different events no more closely related than are say association football, rugby and hockey. Those all involve a ball but otherwise have largely distinct players and fans.

This point was taken into account by ESPN in developing its service called VENN (Video Game Entertainment and News Network), slated for launch later in 2020. This was co-founded by Ariel Horn, winner of four Emmy awards and entrepreneur Ben Kusin, who raised $17 million from investors including co-founders from Twitch, Riot Games and Blizzard Entertainment. The stated aim was to give the fragmented esports scene a unified base for content with higher production value than gamers are accustomed to with online streaming, but crucially catering for the differences within the sector.

To date, the field has indeed been disjointed, such that fans of say the blockbuster game “Fortnite” may have no interest at all in “League of Legends” or “Overwatch”, which are also big hits. It is true that Twitch has become the common streaming platform for such games, but this is partitioned into disjointed streams specific to individual games, with hardly any interaction between gaming domains.

Clearly service providers such as ESPN want to address the full esports segment and also influence development of the field, or generate a sub-genre with wider appeal. To some extent, Turner Sports, now part of AT&T Warner Media, has shone a torch in this direction with its ELeague, shown on Friday nights in the US. This is streamed simultaneously on Twitch and YouTube, with the aim of maximizing reach, while pitching for new viewers from among the existing base.

Video advances at CES 2020 as China retreats
Amazon’s EPL streams were good, Sye will make the next batch great