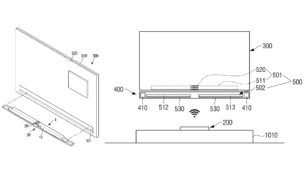 Samsung perhaps more than any other of the top electronics manufacturers has obsessed over the aesthetics of television sets, often to the extent of inefficient gimmicks like creating camouflage capable TVs which blend into the wall like a chameleon. Something more momentous is on the horizon though, as a recent patent filing gives a glimpse into what could be the next disruptive frontier in TV hardware outside the realm of display technologies.

The Korean manufacturer has dreams of building a wirelessly powered TV, eradicating those unsightly power cables once and for all. Samsung has attempted games of hide the wires before with its wall-mounted TVs, for example testing out transparent cords, but this is by far Samsung’s most ambitious cordless project to date.

The image below shows a receiver at the bottom of the TV in the form of a magnetic bar – formed of a solenoid coil and a dual coil – which is being sent power wirelessly by a transmitter below the TV connected via mains. Precisely what sort of distance Samsung wants to achieve is unclear, although the distance between the transmitter (label 200) and receiver seems no more than a couple of feet. For comparison, silicon and transmitters from US licensing firm Ossia can achieve wireless charging over an impressive 12 feet.

The eagle eye of Dutch electronics site LetsGoDigital spotted the patent, which was first made public in late February after being submitted initially in March 2018. Presumably the patent draws from mobile wireless charging techniques, although most – but not all – require physical contact with a wireless charging pad.

Ossia describes its own method of wireless charging, called Cota, as similar to WiFi and Bluetooth, sending a beacon signal from a power receiver to locate a power transmitter, inducing the transmitter to send power back over the same path. It says this “conversation” between device and transmitter happens 100 times a second to send power safely to devices while in motion.

Of course, for Samsung, its TV sets would not be in motion and would most certainly require substantially more power than what Ossia technology is accustomed to – better suited for sensors and switches in the IoT ecosystem.

Should Samsung’s wireless TV dreams ever come to fruition, not only will it cut the power cord, but if wireless screens catch on and become the de facto method of viewing in the future, it would exacerbate cord cutting as we know it. Why would someone pay through the nose for a wireless TV only then to hook up a pay TV set top with unsightly cables, or indeed a games console or DVD player? The ramifications would be widespread -giving rise to smart TV streaming and the proliferation of connected devices, in turn increasing the reliance on and significance of seamless in-home WiFi.