Google Analytics is the low hanging fruit on the video data tree that OTT outfits should avoid like the plague, while the popularity of video encoders developed in-house has surprised just about everyone.

These are two standout conclusions from Bitmovin’s latest Video Developer Report – one of the most thorough vendor-led surveys in only its fourth year.

On the video analytics front, the gulf is shown in black and white, with Google Analytics used by 51% of respondents. Conviva trails in second place with just 16%, followed by Bitmovin Analytics 13%, NPAW 11%, Mux 6%, and MediaMelon 3%. A further 24% chose Other, displaying the wealth of video analytics options on the market, while 17% of those surveyed currently use no analytics, showing numerous opportunities for latecomers.

This huge swing in Google’s favor has irked Bitmovin, and will make painful reading for the other video analytics vendors mentioned above – prompting Bitmovin to pick apart the US giant’s analytics offering.

Bitmovin describes Google Analytics as a decent tool for the basic stuff like tracking general website traffic such as SEO, Google Ads and page visits, but its credibility as a toolbox for online video analytics is questionable. Google Analytics is too general, claims the report, and was designed specifically for web monitoring, while its popularity has been buoyed by its simplicity and integration with its in-house advertising and marketing platforms.

“Proper video analytics,” Bitmovin says, require a more granular data set of metrics than what Google Analytics serves up – which is a holistic view of online video analytics based on aggregated data that misses stand-out events such as critical errors. Session-level monitoring is important here to improve aggregate metrics, with Bitmovin highlighting how its own video analytics provides data around start-up time, video bitrate expenditure, device type, location, stream type, and more.

And with video start-up time voted the most essential video performance metric, at 64% selection among the 792 video developers and industry experts surveyed across 87 countries, Bitmovin is playing its cards in the right place at the right time.

It’s obvious that the video analytics market has become oversaturated in recent years, so we are not surprised to learn how most OTT video providers have defaulted to Google Analytics – with metrics overload driving them towards a simplistic platform that can easily be plugged into advertising and marketing platforms.

But which way is this balance shifting? Unfortunately, this is the first time Bitmovin’s Developer Report has quizzed participants on the types of encoder being used, so there is no historical data to compare with. We can tell you that ffmpeg was named the encoder of choice for open source, while we’ll be sure to revisit this fascinating topic in future Bitmovin reports.

We should note that as OTT video providers scale up to the extent that encoding video is essential to business, then the prospect of developing in-house encoders based on open source software becomes a more compelling option, which is why the likes of Netflix have pioneered in-house encoders. Commercial encoders are better suited to smaller companies handling smaller volumes of content, but with more and more smaller content houses arriving to market, it’s difficult to guess which way the scales are tipping.

As for video codecs, AVC still rules the roost with 91% selection due to its massive device support, although only 29% are planning to implement the H.264 technology in the next 12 months as of answering the survey over summer 2020. A similar decline is apparent for MPEG-2, from 27% using the codec in 2019, while only 9% planned to be using it a year later. 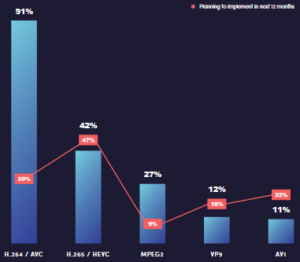