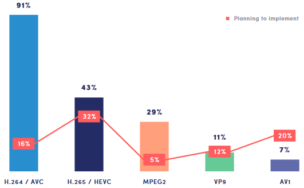 Observing the video ecosystem from the video developer perspective is often overlooked, overshadowed somewhat by those higher up, so it was refreshing to read a report from encoding expert Bitmovin – giving the devs a well-deserved voice. Results from Bitmovin’s third annual developer survey showed an expectantly overwhelming reliance on H.264, although interestingly one-in-five developers plan to implement AV1 in 2020 – with big ramifications for the wider video industry.

Device manufacturers, browser vendors, and content distributers like Cisco, Mozilla, and YouTube have already started implementing AV1 on larger scales, leading Bitmovin to conclude that AV1 is well positioned to compete with H.265/HEVC and to succeed VP9 for open-source use cases in 2020. This goes against the majority of conversations we have had with vendors since AV1 came into existence, with most companies claiming the Google-backed codec will struggle to make an impact.

AV1 claims 30% savings against current generation codecs including HEVC and VP9, rising to 65% savings versus AVC.

As for streaming formats, Apple’s HLS leads the pack just as it did in Bitmovin’s report from last year, with a majority 79% of developers using HLS. The big winner for planned implementation though was CMAF (Common Media Application Format), with 25% of those surveyed expecting to use the promising format next year, almost doubling from the 12% of users today. By allowing smaller chunks, CMAF’s special low latency mode brings streaming latency down to 5 or 6 seconds which is well below the satellite broadcast threshold of 8 seconds.

This is merely the start though, as the combination of multicast ABR, CMAF and Chunk Transfer Encoding brings total OTT stream latency down to just 2 or 3 seconds. It is clear that these technologies are playing a major role in persuading DTH operators the time is right to migrate to OTT.

AI and machine learning were covered too in the report, with 24% of respondents attesting to using AI and ML-based video workflows this year, rising to 32% next year. A little on the low side if we’re honest, considering how frequently the two terms are thrown about. Developers plan to forge ahead though with over half of the survey participants planning to start using AI and ML in the next two years to enhance existing workflows, accelerate time to market and reduce costs.

New to the Bitmovin survey was a segment on devices, to investigate where video developers are investing their OTT video and audio efforts. Results showed HTML5 in browsers way out in front with 85% of votes, followed by HTML5 on Android and native iOS both tied on 60%. Chromecast ranked highest in connected devices with 40%, followed by Android TV with 36%, Apple TV 33%, and Roku 21%.

Roku lagging behind is peculiar if we take total audience into account, with Roku recently blowing away its numbers by surpassing 30 million active users in Q2 2019 – comprehensively extending its native dominance in the connected TV space. Roku clearly is not as popular with the video developer community as with the general public.

Monetization wise, SVoD has spiked from 36% selection in 2017 to 56% today, ahead of AVoD on 48% today, rising from 26% two years ago. Hybrid business models have dropped off in popularity, however, from 26% last year to 21% today. MVPD is new on the scene in this year’s report, chosen by 9% of participants, a low figure as aggregators generally enforce this model on network streaming channels.

Let’s up the ante a little and jump into security. Bitmovin’s 2019 Developer Report that a disconcertingly low number of video developers are still not using DRM, with 40% of respondents using no DRM at all. HLS Fairplay was the most used DRM with 34% using the technology, given Apple’s device proliferation, followed by DASH Widevine on 32%. HLS Flash Access shrank to just 4% and Bitmovin notes the DRM is phasing out – expecting Flash Access to disappear from the list altogether by next year.

Bitmovin’s research led VP of Marketing Kieran Farr to a grave conclusion, “There’s a nuclear bomb going off in the complexity of the codec market for OTT. I think that will settle down as some vendors go out of business, and the rest will have to make money out of it. We are all going to have to deal with a multi-codec world.”