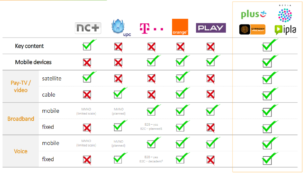 Disruption is coming for the Polish video market triggered by incumbent DTH operator Cyfrowy Polsat which this week launched an OTT video service with dedicated hardware. Unfortunately, disruption has already struck set top manufacturer ADB, as the launch of EvoBox Stream marks the end of a longstanding supplier relationship with Cyfrowy Polsat.

Coined EvoBox Stream, while the product is unlikely to dislodge established OTT video services, it certainly threatens the livelihoods of traditional pay TV offerings, including Cyfrowy Polsat’s own.

Cannibalization is key again. The trend perhaps hasn’t been quite as endemic throughout the pay TV marketplace as last year but there are signs of a shake up across Europe. But crucially, for EvoBox Stream, the launch marks Cyfrowy Polsat’s expansion of video services from its own network infrastructure to the networks of rival ISPs – taking a significant step towards embracing OTT which rivals are sure to follow.

Naturally, we had assumed the EvoBox Stream set top has been manufactured by long-term supplier ADB, but the company confirmed to Faultline Online Reporter that the project was done without ADB’s participation. The Swiss manufacturer delivered previous versions of the EvoBox PVR which first rolled out in 2016, with the last version being the Lite device rolling out last summer. The Stream device is the first in the EvoBox family to go full OTT and wave goodbye to the DVB-T digital terrestrial antenna. However, EvoBox Stream users can still hook the device up to their existing DVB-T antenna to receive OTA signals. Users can access over 100 channels across nine package options.

Cyfrowy Polsat has historically also been a fan of ADB’s Graphyne UI as well as its ConnectedOS cloud platform for cloud delivered services, neither of which have made the jump to EvoBox Stream. ConnectedOS is a hybrid cloud and device centric middleware platform with advertising insertion and targeted marketing capabilities driven from its CRM system.

We believe AWS Elemental is tasked with encoding having ousted Ateme from the mobile TV encoding account at Cyfrowy Polsat a few years back, while the operator has built an in-house packager.

Interestingly though, when Cyfrowy Polsat first selected ADB set tops, this marked the end of a 7+ year run in which it manufactured its own set tops, some 6.8 million of them running STMicro silicon and Maxlinear CMOS tuners. It was one of very few European operators to undertake its own hardware responsibilities and ADB is under the belief that the Polish operator has returned to developing its own set top hardware and software rather than recruiting a new supplier. The move suggests that other legacy components may now be handled in-house.

Ipla TV offers a lot of content free of charge with commercials driving monetization. Both contract and pre-paid services are offered through Cyfrowy Polsat including pre-paid TV, telephony and broadband. The company claims a 25% TV audience share and 27% advertising share in Poland.

A comparison chart in Cyfrowy Polsat’s Q1 earnings report compares its convergent offerings with those of rivals, boasting a full house of content, both original and licensed, plus unrivaled reach across all platforms.

EvoBox could cement Cyfrowy Polsat’s strong position in a market fast approaching 40 million people. The operator needed a TV refresh after recording pay TV subscriber losses of 22,000 in Q1 2019 to total 5.1 million, although multiroom users increased by 7,600 to nearly 1.2 million. ADB clearly wasn’t seen as part of that refresh.