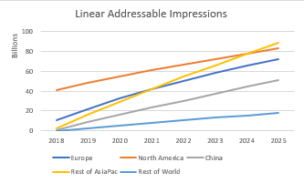 Addressable TV advertising has long been talked about but only more recently been deployed and even then only on a patchwork basis led by a few pioneers such as Comcast’s Sky in Europe or later German broadcasters RTL and ProSiebenSat.1 in partnership. The USA has also been in the vanguard, especially on the back of AT&T’s advertising business Xandr whose platform is used by another AT&T subsidiary Turner to sell targeted ads on its linear TV networks.

But now addressable TV advertising is poised to spread rapidly across the rest of the pay TV universe beyond the few existing hot spots, generating annual revenues set to grow globally by six times from $15.6 billion in 2018 to $85.5 billion for 2025. This is a key finding of the latest report from our Rethink TV research division, Addressable Advertising Forecast to 2025 Addressable advertising boom across all regions and platforms.

Three factors are conspiring to drive this growth. Firstly, inventory will be aggregated to increase size of addressable targets, making them viable for larger brands and overcoming the barrier of fragmentation within the ecosystem. Secondly, the rise of connected TV (CTV) will propel growth in more prosperous economies, as it is already doing in North America as well as in more developed Asia Pacific countries, especially China, Japan and Australia. This reflects lower barrier to entry since ads can be targeted more easily to TVs that are directly connected to the internet, avoiding need for a dedicated platform.

The third factor is growing appreciation that addressable TV advertising works and benefits all parties to the transaction. Consumers see ads that are relevant and interesting, helping improve their experience of the overall TV service. Advertisers increase engagement and reduce costs because they reach their target audience without wasting money paying for blanket spots that reach the whole audience, including many viewers who are not in the least bit interested. Then broadcasters and operators gain because the total value of their inventory goes up. Since addressable ads are targeted at people identified as likely to be interested in the associated product or service, they fetch higher CPMs (Cost Per 1000 impressions) than general spots broadcast to all viewers of a program.

Furthermore, evidence obtained by Sky shows that addressable advertising works even better when combined with traditional blanket spots. This is because the mass spot seen by everyone can raise awareness of a brand and then a targeted ad can zoom in on individuals interested in that company’s actual products or services. There is also evidence that addressability improves the effectiveness of traditional spots even in the absence of associated targeted ads. This is because the combination of addressability and measurement can enable brands to ensure that all viewers have seen a given ad while also avoiding showing it too often, which can cause annoyance.

This leads on to the synergy between addressable TV and online advertising in cross platform campaigns, which will become more prominent over the next few years. Advertisers will increasingly seek to exploit the complementary features of online and linear TV, while broadcasters and operators will want to incorporate online in their inventories when they can to provide greater scale. This is still a subset of the total online advertising market, which also includes display and banner ads and was worth $283 billion worldwide in 2018. Online video advertising is about 16% of that, standing at $47 billion in 2018, although that percentage is rising.

CTV advertising is in turn a subset of online, being also delivered over the internet but as part of a pay TV service. Connected TVs are also used to access ads over the internet via third party apps or services outside an operator’s range and these are counted under the larger more general online total. Similarly, ads served within online-only versions of pay TV services and viewed on other connected devices such as smartphones or tablets are also counted under the general online total.

In fact, convergence between TV and online video advertising will be one of the key themes over the next six years, with addressability an important enabler. This is providing a lifeline for traditional commercial broadcasters and pay TV operators which have their ownership of first party audience data as a foundation for effective cross platform advertising. By contrast, the big technology players lack direct access to such data for TV, which is one reason Google has been so keen to promote Android TV as a core set top platform and been willing to make compromises to overcome anxieties over its longer-term intentions.

However, this is not true for revenues because average CPMs are higher in North America, which will therefore remain the leading region on that front. The Rethink TV report contains graphs showing revenues as well as impressions for all the regions, broken down also between the three sectors of addressable TV advertising: linear, VoD/time-shift and CTV.

It is worth mentioning that there is some kickback against addressable TV advertising from a few traditional operators as well as brands, although this is often out of ignorance over how best to deploy it.

The kickback argument is that addressable threatens to slay the goose that lays the golden egg, that is the ability of TV to reach a mass audience with a coherent message. But properly employed, addressable will reinforce rather than diminish that scale. Firstly, a blanket spot can still be shown to the majority of the audience, reserving targeting for some clearly identifiable subsets. Secondly, addressable can be reserved as a follow up for viewers who have already seen a blanket spot. Indeed, as we have already noted, there are various ways in which addressable can be combined with mass spots, as the likes of Sky have already found. That is before we even begin to consider the potential synergies of cross platform campaigns.

For these reasons there is no going back on addressable now and it is time to focus on how best to harness it.