Finally, an ATSC 3.0 hardware newsflash we can get behind. The announcement arrived not from the US, however, but from South Korea – the sole other ATSC 3.0-driven country – as multiscreen platform vendor Alticast began porting its software onto the dongles of an unknown local hardware manufacturer called LowaSIS.

Alticast’s recent ATSC 3.0 heat map has strongly implied an end to the Korean firm’s exploits in the field, last announcing a joint showcase with encoding firm Triveni Digital at the 2014 NAB New York show. Five years later, the latest East-coast version of the broadcast event has sparked the vendor back into life, encouraged perhaps by Synamedia’s disruptive entrance last week, as well as the recent consumer branding of the IP-based broadcast standard – going under the guise of Next Gen TV.

What middleware specialist Alticast is lauding is a package capable of managing, decoding and rendering ATSC 3.0 video content. It has developed a modular, client-side software designed for a hybrid model supporting both ATSC 1.0 and ATSC 3.0 streams, and has pre-integrated this on LowaSIS hardware. We observed this dual-mode in action last week, with Synamedia addressing demand among broadcasters by compressing and repacking existing ATSC 1.0 signals to free up bandwidth required to launch new ATSC 3.0 services.

For now, only dongles from LowaSIS are capable of receiving ATSC 3.0 streams, saying it will expand the Alticast software stack to include set tops and gateways in the near future, compatible with Android TV and Linux operating systems. The company claims its Alticast-ported dongle has been used in various ATSC 3.0 trials and interops, although doesn’t specify if any tests have been conducted outside of South Korea. We pinged emails to Alticast teams in both Denver and Seoul on the off chance any Alticast-powered LowaSIS dongles have made it to the US.

In the meantime, let’s take a look at the LowaSIS hardware portfolio. Its ATSC 3.0 middleware-based UHD mobile broadcast receiving module is a USB dongle weighing just 27g (slightly more than a Roku streaming stick but less than an Amazon Firestick and Google Chromecast). Strangely though, the LowaSIS dongle product page includes an infographic (image below) featuring an ATSC 3.0 capable smartphone, alongside a UHD TV display and an in-car display. ATSC 3.0 string pullers in the US have infamously backtracked on the standard’s initial handset ambitions, so does South Korea have something the US doesn’t?

Clearly this is a misleading concept image. The impracticality of connecting a clunky USB dongle to a mobile device makes that implausible even if it were adapted to USB-C, and besides no smartphone on the planet has a USB 2.0 port. So perhaps LowaSIS is merely attempting to convey that ATSC 3.0 capable receivers in mobiles are a work in progress, possibly combining the standard with 5G. Or perhaps smartphones and tablets could be used to control the ATSC 3.0 dongle-connected TV, much like a Chromecast device.

Similarly, the LowaSIS home gateway is described as being capable of receiving ATSC 3.0 broadcast signals and then wirelessly transmitting this from the gateway to a smartphone installed with ATSC 3.0 middleware, as shown in the second infographic shown below.  The set top, meanwhile, simply receives ATSC 3.0 signals and outputs AV data through HDMI for a 4K display, running an ARM Cortex-A53 CPU as the main SoC.

With LowaSIS looking at in-vehicle infotainment systems as an ATSC 3.0 product target market, it reminded us of the work SK Telecom successfully completed in June this year, completing an in-vehicle HD TV broadcast using the ATSC 3.0 standard in partnership with Sinclair Broadcast and Harman. The demo combined ATSC 3.0 with 5G and SKT claimed 4 times clearer screen quality, while using an addressable system to show different ads on each of the vehicle’s three screens.

We last heard from Alticast in May 2019, landing a deal unrelated to ATSC 3.0 at Turk Telecom. Coincidentally, this came in the same month that the ATSC member group first proposed its international expansion plan, which was followed by the formation of an international planning team in September. The scope of work includes communicating with international standards development organizations, proposing technical enhancements to the ATSC 3.0 standard designed to support global use cases and – importantly – getting ATSC 3.0 under the spotlight at tradeshows and conferences outside the US.

With support from the Korean Electronics and Telecommunication Research Institute, the US delegation has put forward an ATSC 3.0 proposal to the ITU working group in charge of developing worldwide recommendations. However, when paraded alongside the recently unveiled DVB-I standard in Europe, an evolution of the broadcast standard embracing multicast ABR and Low Latency DASH to support OTT delivery, the DTT limitations and lack of hierarchical modulation inherent in ATSC 3.0 look exposed. 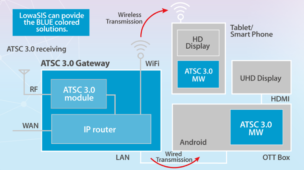