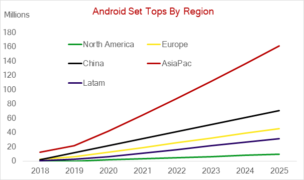 For over a decade, the set top has defied predictions of imminent expiry into software but at last there are signs of that coming to pass. However, the death will be drawn out for another decade during which there will be significant rationalization in the number of viable operating systems.

Android TV, RDK and a handful of other specialist smart TV OSs will come to the fore, mostly at the expense of generic Linux variants, plus a new entry out of China in Huawei’s Harmony OS. This will benefit from the US China trade war, surging to take 28% of the set top OS market there by 2025, holding Android back at 14%. Elsewhere, Android will take almost a third of the global set top OS market, although that will still be behind the sum total of various Linux-based variants to which many operators have made quite long-term commitments.

These conclusions are spelt out in a new report from our research and analytics arm Rethink TV, entitled “How to survive the Set Top Box endgame.” The report predicts that on pure set tops globally, Android will reign supreme and make huge gains in Asia Pacific, Europe and Latin America. Although Android will also score in North America, it will be held at bay there by the resolute rock of RDK, because of the latter’s increasing dominance in the cable sector.

RDK indeed is a major subplot in the set top OS story, having been launched by Comcast around 2009 as a migration platform towards IP for cable operators with ambitions to take some DTH operators and telcos as well. But then Android came along and scotched those ambitions of making an impact outside the cable sector, even forcing RDK onto the back foot within it. It made it look likely that RDK would be confined to its largely North American base of tier 1 cablecos such as Cox and Comcast itself, although it had gained two major scalps outside in Vodafone and Liberty Global. Although the latter is US-owned, most of its properties are in Europe, save for VTR in Chile and Liberty Puerto Rico.

RDK was forced to respond and it did, with two key moves. Number one was the appointment in September 2018 of Metrological as the first but not necessarily only provider for its pre-integrated turnkey app store. This made RDK a realistic alternative for integrated broadcast/broadband services to Android TV Operator Tier with its admittedly superior Google app store. The second key move followed in 2019 with launch of the RDK Accelerator, in partnership with Arris (now CommScope) and Metrological, to help operators incorporate and launch these streaming apps, whether internally developed, from the app store, or one of those big hitters. This comprised an IP based set top from Arris, the 4K VIP5202W model, Metrological’s pre-integrated app store, and whatever is the latest RDK software version.

These reinforcements have not just shored up RDK’s core base but also enabled it to come out fighting against Android among lower tier operators with a competitive platform. We anticipate RDK making some headway then in Europe and to a smaller extent in both Asia Pacific and Latin America, although with no presence at all in China. The graph below shows that because of its hold among major MSOs, RDK shows up well on the graph of global top 20 pay TV operators, only being overtaken by Android in 2023.

The huge growth in connected TV means that the Rethink TV report also forecasts trends in smart TV OSs, where the story is very different. With the Chinese government strongly backing efforts to develop a national OS, almost certainly around Huawei’s Harmony, Rethink TV predicts a huge surge there at the expense primarily of Android derivatives currently incorporated by the country’s smart TV makers. By 2025, Harmony OS should be on 75% of all smart TVs sold in China.