Arris kicks off 2020 with another tri-band WiFi 6 router, adding Alexa 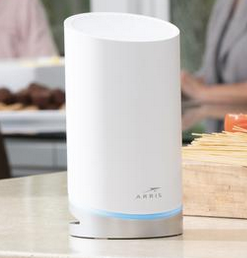 Arris raised a few eyebrows back in July when it accused rival tri-band WiFi 6 router manufacturers of cutting corners by placing older WiFi 5 (802.11ac) or WiFi 4 (802.11n) technology on some of the bands. Not wasting any time, the CommScope-owned company has already released an evolution of its mesh WiFi 6 technology – the SURFboard mAX AX6600 router.

But with competing products arriving hard and fast, Arris took a less provocative approach this time around, which isn’t much fun at all, but it will get you a two-router system each delivering up to 6.6 Gbps speeds. What Arris appears to be doing is attempting to disrupt the high-end multi-AP market, instead offering two-router mesh systems which it claims is sufficient for multiple 4K streams or VR use cases up to 6,000 square ft.

Available as a standalone router or as part of a whole home mesh system, the AX6600 will hit retail in Q2, with prices yet to be determined. Before we can piece the Arris SURFboard mAX mesh WiFi 6 product line together, we need to deconstruct it. At present, there are three separate AX systems – the AX11000, AX7800 and the newer AX6600. The latter has been built as a complementary router (image below) to the AX11000 Pro Mesh and the slightly cheaper AX78000 Plus Mesh products.

One of the main differentiators of the SURFboard mAX AX6600 to its sister products is support for Alexa voice control for WiFi access features from Alexa-compatible devices. For example, the Alexa WiFi Access feature can be used for requests like “Alexa, pause the WiFi for 30 minutes” or “Alexa, turn of the WiFi for Philip for 30 minutes” – so little more than a voice-activated parental control feature as far as we can tell.

At the time of launch 6 months ago, Arris claimed that the SURFboard mAX Gigabit WiFi Pro and Plus systems were the only devices on the market using WiFi 6 on each of three separate bands (two 5 GHz bands along with 2.4 GHz), making use of 4×4 antennas and mesh technology.

Tri-band WiFi 6 routers from the likes of Netgear, Linksys and more have since appeared on the market, so we asked Arris whether it saw these arrivals as reputable competition. A CommScope representative could only tell us, “The SURFboard mAX Pro and Plus were the first tri-band WiFi 6 systems on the market. Other companies have introduced tri-band WiFi 6 products since our launch.”

A main selling point is that in the case of a mesh system with multiple routers within a large premises, the second 5 GHz band acts as a dedicated communications line between the two routers to speed up the entire system by as much as 180% over dual-band configurations. An advantage of having a third band, with 4×4 WiFi 6, is that it provides a dedicated backhaul to ensure faster speeds around the home.