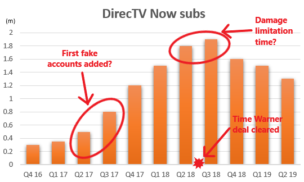 Usually we would wince at the act of kicking a company while it is down, but when that company is AT&T and the allegations are as serious as falsifying accounts, we need to ask ourselves not how AT&T got away with it but why a behemoth operator in the world’s wealthiest market was driven to such extreme lengths?

AT&T was slapped with a lawsuit this week alleging that fake DirecTV Now accounts were created and factored into the company’s quarterly and annual filings – creating an entirely manufactured and fraudulent illusion of the streaming skinny bundle’s performance to please investors. Of course, these remain nothing more than allegations for now but given last week’s events which saw activist investor Elliott Management attack AT&T out of the blue for sustained mismanagement, the pendulum is not swinging in AT&T’s favor. It just so happens this latest spate of AT&T humiliation ties in directly with the operator’s M&A obsession which forced Elliott to serve the board an extensive strategy rethink.

The allegations might also help explain why DirecTV Now was inexplicably renamed AT&T TV Now (which has the same number of syllables as Netflix, HBO and Hulu combined) – distancing itself from a withering brand which cost $billions as executives pushed on to pastures new in the form of Time Warner.

But first things first, let’s trace DirecTV Now’s journey back in an attempt to pinpoint where the alleged falsification of accounts began. DirecTV Now’s initial uptake began at a trickle at around 300,000 subscribers in its first few months after launching in November 2016, eventually surpassing 500,000 in Q3 2017. This was well below expectations so we suspect the fake account scandal began early on in DirecTV Now’s fledgling career, which may well have continued right up until Q4 2018 when subscriber numbers began falling off a cliff, continuing through Q2 2019 to paint a less severe picture, as visible in the graph below.

According to Bloomberg, senior AT&T management began ordering sales representatives to create fake DirecTV Now accounts ahead of the mega merger with Time Warner last year, then once the deal completed in June 2018 and the successful deceit of investors was completed, AT&T stopped making fake accounts and DirecTV Now subscribers were in freefall. Ultimately, AT&T saw sustaining a solid number of DirecTV Now subscribers in the eyes of investors as imperative to pushing the Time Warner deal over the line.

The damage is already done, but those who vehemently opposed the deal will be seething that this went unnoticed and – if AT&T is found guilty – will advocate for the harshest possible punishment. A penalty fine probably, or perhaps a court could order the operator to sell off a number of assets to settle investor unrest, with DirecTV likely first in the firing line and rumors of a suitor are already swirling (see separate story in this issue).

AT&T’s apparent deceit was achieved via a number of sneaky tactics, according to a lawsuit filed by a roster of investors, including the Steamfitters Local 449 Pension Plan. One prominent method involved AT&T employees delighting mobile subscribers by waiving a $35 fee for upgrading handsets when in reality that $35 would be billed and used to create as many as three DirecTV Now accounts at a time.

“This apparent success was a complete mirage. Information provided by multiple former employees of AT&T and its affiliates from across the country collectively confirm a wide-ranging fraud, perpetrated at the highest levels of the company,” investors stated in the lawsuit, initially filed in Manhattan federal court back in April.

At the time of DirecTV Now’s disappointing start, we recall saying that it was only a matter of time before the floodgates opened as subscribers would begin switching DirecTV satellite TV subscriptions for the better value DirecTV Now. Elliott Management’s insights from last week paint a picture of why what should have been a simple transition was never realized.

“DirecTV Now (renamed AT&T TV Now), has been poorly executed with delays, technical mishaps, weak customer service and usability issues. Despite describing DirecTV Now as a replacement for DirecTV, the natural-substitution narrative has not played out. While unsustainably low prices and aggressive promotion did initially help the product scale, the benefits turned out to be very short term in nature. As AT&T raised prices to normalized levels, results rapidly deteriorated. After just two years of existence amidst an otherwise-booming OTT market, DirecTV Now’s subscriber count is now declining,” stated Elliott Management in its recent letter to AT&T.

It was Q3 2018 when alarm bells began ringing as DirecTV Now sign ups all-but ground to a halt, which it blamed on the $5 price hike implemented in August 2018. Up until that point, DirecTV Now had served AT&T as a pay TV subscriber off-setting tool, albeit not consistently, which it successfully dressed up to investors on what now look to be entirely false pretenses.

“We plan to fight these baseless claims in court,” AT&T said in an emailed statement to Bloomberg. We’re sure it does but AT&T is dancing on dangerously thin ice and the recent investor discontent – to put it lightly – does not bode well one bit for AT&T’s forthcoming HBO Max OTT launch.