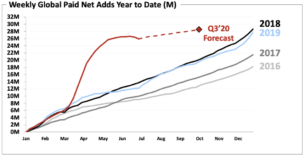 Q2 2020 was a triumph for Netflix on many levels, none more significant than the company’s net income which spiked 165.7% to $720 million for the quarter. Before long, perhaps as early as Q1 2021, Netflix could be registering its first $1 billion+ net income quarter – an achievement that would return the naysayers deep into the woodwork and prove Netflix’s worth as a financial TV superpower, not just a content one.

This came from revenue of $6.15 billion, up 25% to mark a new personal best for Netflix. Operating margin was up to an impressive 22.1%, from 14.3% the previous year, while net income to revenue reached a margin of 11.7% in Q2, more than doubling from the 5.5% net income-revenue margin recorded this time last year. Netflix’s sustained financial successes not only make it a figurehead for the entire global video streaming industry, but increasingly the SVoD platform is a lesson in how to chase profitability, despite calls over the years that Netflix has been grossly overspending on content.

Netflix has – like its competitors – been hindered by having content productions put on ice during the pandemic. However, Netflix’s vast portfolio, spanning genres for varying tastes, has served to emphasize its appeal at a time when consumers have been exceptionally budget-conscious.

That said, Netflix’s current streaming content obligations stand at $19.1 billion, a relatively stable figure over recent quarters that is up marginally from the $18.5 billion in obligations a year ago.

Netflix onboarded just over 10 million new paid subscribers during the second quarter, adding to its 15.77 million haul of new subs in the previous quarter. Netflix is forecasting a more modest 2.5 million subscriber sign ups during Q3 as the company foresees people returning to some level of normal as lockdown restrictions are eased. Q2 subscriber data includes the small number of inactive accounts that were axed in June.

The absolute absurdity that is 2020 can be visualized in the following graph showing Netflix’s weekly paid net subscriber additions from 2016 to date, where a steady pattern over the past four years has been replaced with what looks like a kindergarten pupil tasked with plotting the company’s 2020 data.

There were just shy of 3 million subscriber additions in the US and Canada (rising to 72.9 million) during Q2 2020, while EMEA saw an upswing of 2.75 million (61.5 million), while Latin America gained 1.75 million (36.1 million total). APAC was second only to North America in terms of paid subscriber uptake, increasing by 2.66 million to reach 22.5 million.

Interestingly, ARPU grew healthily in both North America and EMEA regions, while sharp declines impacted ARPU in Latin America and APAC, by 9% and 4%, respectively.

One of the more unconventional spectacles from Netflix’s latest financial results event was the promotion of Chief Content Officer Ted Sarandos to co-CEO alongside Reed Hastings – which is testament to the masterful way in which Sarandos has kept Netflix competitive in content with a ballsy original production strategy.

This was a natural move that was a long time coming for Hastings, who commented, “Ted has been my partner for decades. This change makes formal what was already informal – that Ted and I share the leadership of Netflix.” A real-life love story.